Hasbro Inc. (NASDAQ: HAS) surpassed market expectations with revenue growth and a surprise profit for the first quarter of 2019. Shares gained 15% in morning hours on Tuesday. 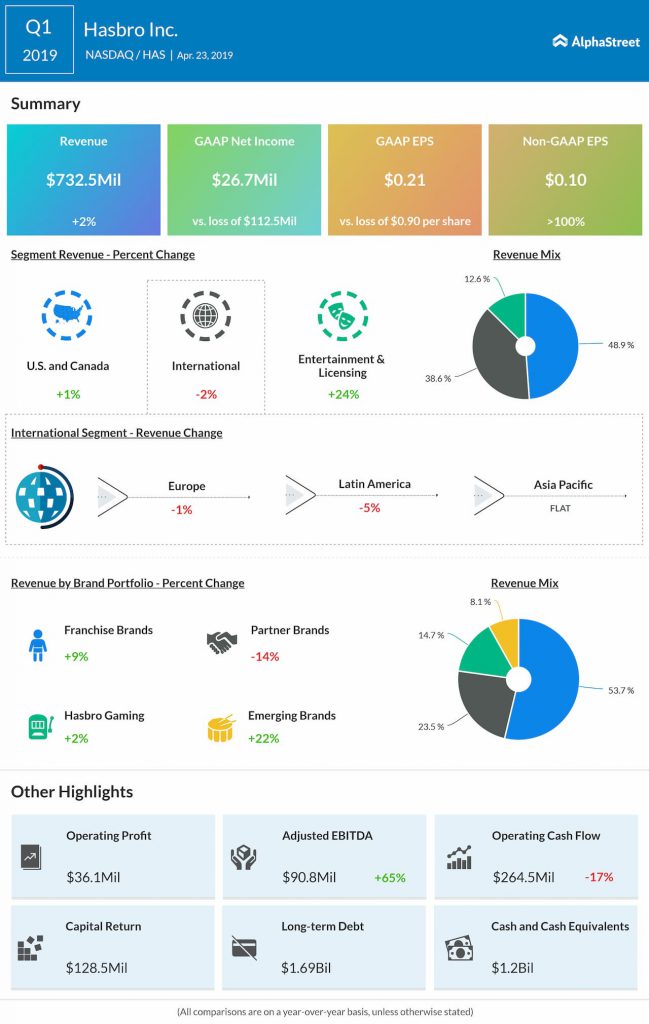 Net revenues in the US and Canada segment rose 1% to nearly $358 million, helped by growth in Franchise Brands, Hasbro Gaming and Emerging Brands. Revenues in the International segment fell 2% to $282.6 million. Within International, Hasbro saw revenue declines in Europe and Latin America while Asia-Pacific remained flat. Excluding Forex, all regions across International registered revenue growth.

Franchise Brands revenue increased 9% to $393.6 million, driven by revenue growth in MAGIC: THE GATHERING, MONOPOLY, PLAY-DOH and TRANSFORMERS. Partner Brand revenues dropped 14% to $172 million, as revenue growth in BEYBLADE was offset by declines in other brands.

Hasbro Gaming revenue grew 2% to $107.6 million, fuelled by revenue growth in games such as DUEL MASTERS, CONNECT 4 and TWISTER. Revenue in Emerging Brands rose 22% to $59.4 million, driven by growth in quick strike collectibles, SUPERSOAKER and FURREAL FRIENDS as well as initial shipments of POWER RANGERS in North America.

MercadoLibre (MELI): Here is a stock to have on your investment radar

MercadoLibre Inc. (NASDAQ: MELI) is one of the stocks that benefited from the COVID-19 pandemic. The Argentine ecommerce company has caught the attention of market experts as it garnered growth