Hormel Foods Corporation (NYSE: HRL) reported a 19% jump in earnings for the second quarter of 2019 helped by lower costs and expenses as well as a decline in income tax provision. The results exceeded analysts’ expectations. However, the company lowered its fiscal 2019 earnings and sales guidance due to the African swine fever.

Net income attributable to the company grew by 19% to $282.43 million and earnings increased by 18% to $0.52 per share. Excluding the one-time gain on the divestiture of CytoSport, adjusted earnings were $0.46 per share. The second-quarter earnings did not meet the company’s expectations.

Net sales inched up 0.6% to $2.34 billion. The company’s three of its four segments delivered volume and sales growth. 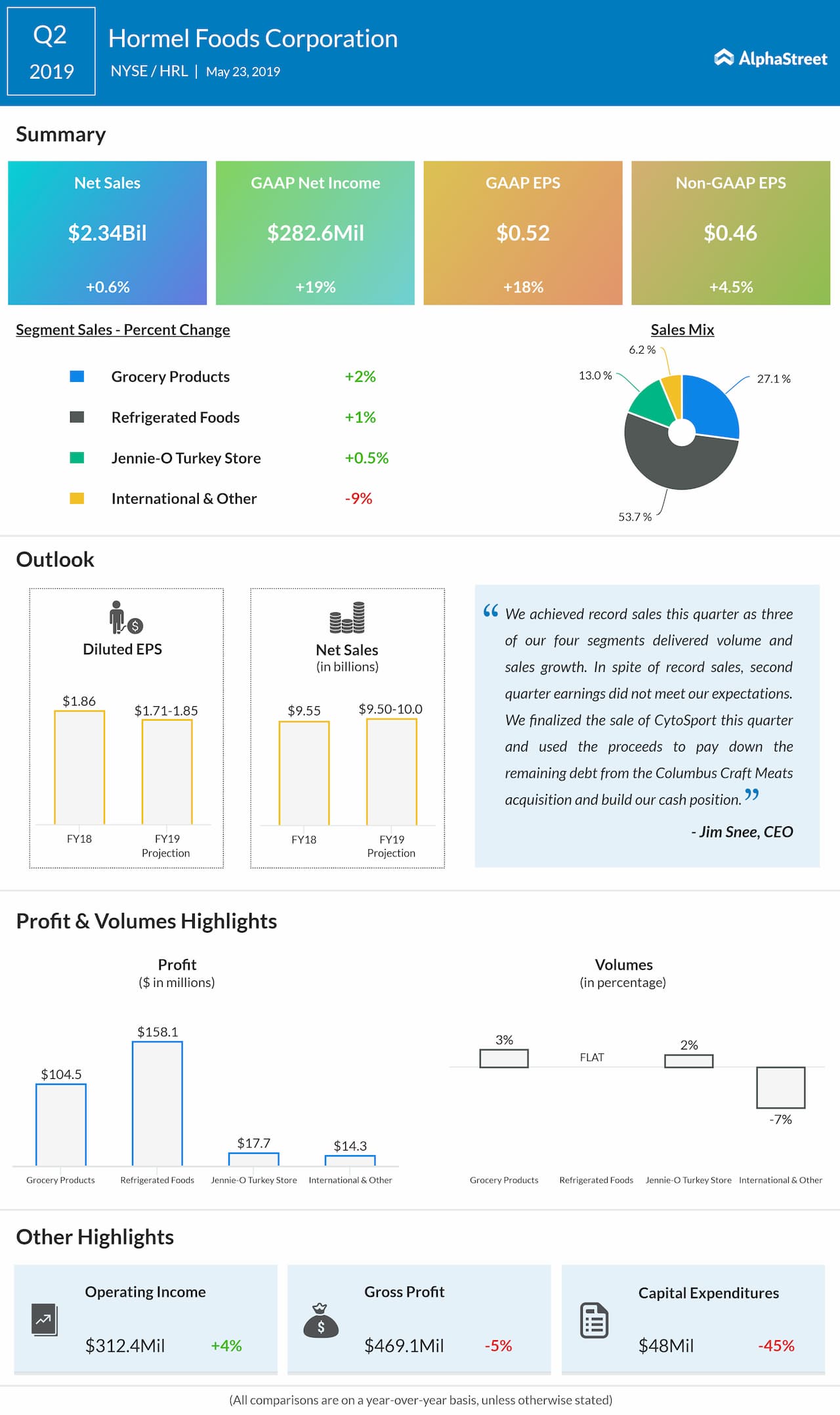 Looking forward, the company is currently experiencing with African swine fever. For fiscal 2019, the company lowered its net sales outlook to the range of $9.50 billion to $10 billion from the prior range of $9.70 billion to $10.20 billion, and its earnings guidance to the range of $1.71 to $1.85 per share from the previous range of $1.77 to $1.91 per share. The revised earnings guidance range is based on the input cost increases and a forecast for volatile domestic pork prices in the second half of fiscal 2019.

For the second quarter, the company experienced a rapid increase in input costs as the global hog and pork markets were impacted by the African swine fever in China. In response, pricing action was taken across the company’s branded value-added portfolio in the Grocery Products, Refrigerated Foods, and International segments.

Also Read:  Earnings preview: The Children's Place likely to get a treat in Q3

A combination of plant startup costs and lower retail sales dragged Jennie-O Turkey Store profits down. However, the company is reactivating promotional activity and advertising in order to regain distribution as it is now on track to deliver the production efficiencies. Hormel Foods has made a large investment to automate its whole-bird facility in Melrose, Minn.

Hormel Foods has used the proceeds from the sale of CytoSport to pay down the balance debt from the Columbus Craft Meats acquisition and build its cash position. The company is expected to use the balance sheet for growing through disciplined and strategic investments, including acquisitions and capacity expansion projects.

In Grocery Products segment, volume increased by 3% and net sales rose by 2%, which was led by Herdez salsas and sauces, Wholly guacamole dips and Skippy peanut butter. In the Jennie-O Turkey Store, sales were flat as improved results in foodservice and whole-bird sales were offset by declines in retail sales due to the lingering impact of two voluntary product recalls.

International volume decreased by 7% and net sales fell by 9%, primarily due to the continued impact of tariffs on fresh pork exports along with higher freight costs. Growth in the company’s China business was driven by increased sales of branded value-added products such as SPAM luncheon meat and Skippy peanut butter.

Shares of Hormel Foods closed Wednesday’s regular session down 0.83% at $39.49 on the NYSE. Following the earnings release, the stock inched down over 2% in the premarket session.

Broadcom (NASDAQ: AVGO) reported non-GAAP EPS of $5.14 for the second quarter of 2020 on revenue of $5.74 billion. While the earnings came in line with the analysts' estimates, revenue

Will Zoom (ZM) keep up the booming trend?

Video conferencing platforms and other workplace collaboration tools have become more popular nowadays. With most people confined to their homes, apps that allow us to stay in touch have become

Cloudera (NYSE: CLDR) once again proved its mettle by reporting impressive results for the April-quarter that was mostly marred by the market-turmoil spurred by the virus attack. Though the tech