iQiyi (IQ), the video streaming arm of Chinese major Baidu (BIDU), on Thursday, reported a 55% increase in fourth-quarter revenue to RMB 7 billion ($1 billion), helped by a 72% increase in subscriber base. Analysts had projected revenue of just $961.45 million in Q4.

At the end of the fourth quarter, iQiyi had 87.4 million subscribers, of which over 98% were paying members.

However, net loss attributable to iQiyi widened to RMB 3.5 billion ($505.7 million), from RMB 612.4 million in the same period last year, as higher costs of producing original content weighed on the bottom line. On a per share basis, the company lost RMB 4.83 ($0.70), a cent more than what the street was expecting. 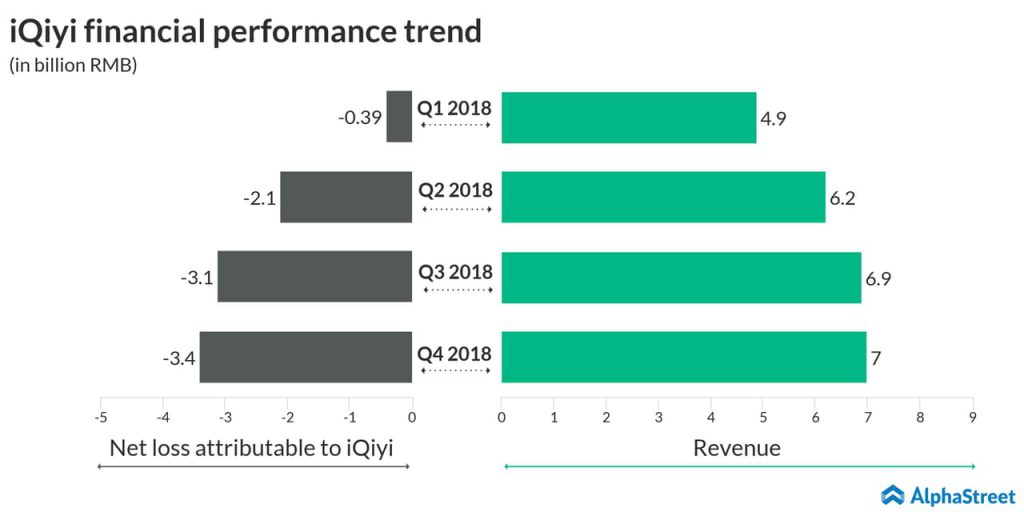 The stock fell over 1% during after-market trading on the bottom line miss. The stock has gained 26% since its IPO in March last year.

CEO Yu Gong said, “We maintain our strategic focus on producing original premium content, and will continue to advance our technology innovation and nurture our ecosystem to fully leverage the tremendous IP value in our content.”

Like Netflix (NFLX), iQiyi’s content is highly popular in its home market and the company continues to burn cash to create more original shows and movies. It also doesn’t shy from innovating with newer technologies including augmented reality to provide better binge-watching experience to viewers. But all that is coming at the cost of squeezed margins.

Cost of revenues during the quarter doubled to RMB 8.5 billion ($1.2 billion), of which a lion’s share was attributable to content production.

iQiyi is undeniably a strong firm, reporting steady increases in top line and subscriber base. But it’s high time that the video streaming platform delivers on the bottom line for once, instead of revenues and subscriber additions.

The company might also need to reconsider its growth strategy to boost its premium subscribers, in order to provide some short-term respite with regards to the cash position.