Net profit was $3 billion vs. loss of $10.7 billion a year ago. Johnson & Johnson reported diluted earnings of $1.12 per share for the three-month period, a turn around from the $3.99 per share loss last year.

While both Medical and Consumer segments saw sales slow down, it was the robust 5.3% sales growth in the Pharmaceutical segment that helped Johnson & Johnson see the quarter through.

“Johnson & Johnson delivered another year of strong operational sales growth of 6.3% and achieved our 35th consecutive year of adjusted operational earnings growth at 9.8% in 2018,” said CEO Alex Gorsky in a company statement. 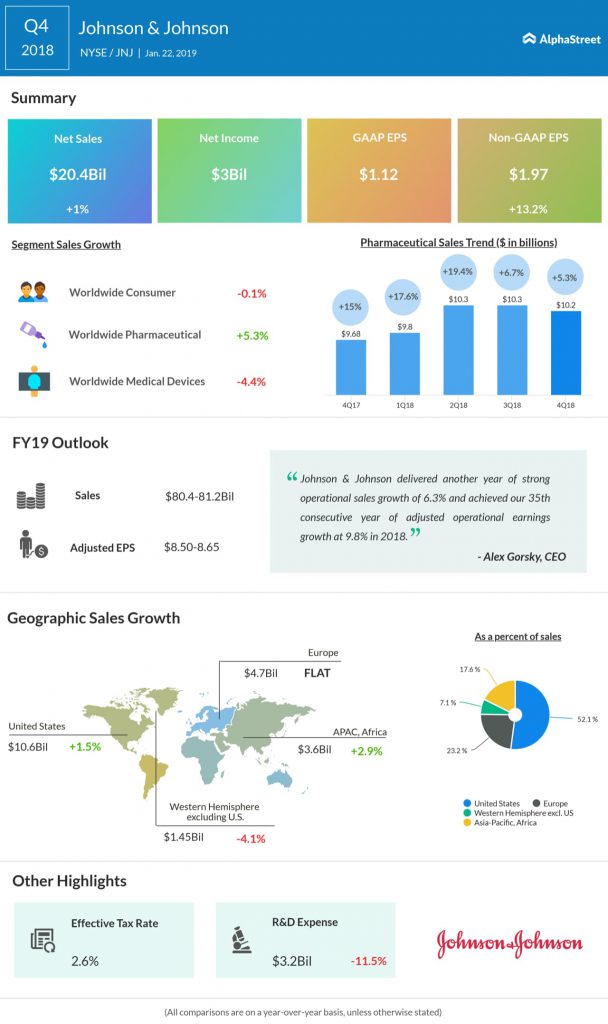 In the first week of January, shares of the company slipped 1% shortly after it reported a 3% sales dip in India in the year ending March 2018. In a regulatory filing with the Corporate Affairs Ministry of India, total sales reportedly fell 7% to about $829 million during this period, hurt by weakness in the medical devices segment after the Asian country imposed strict measures to cap the pricing in the segment.

The negative publicity surrounding Johnson and Johnson baby talc products also pulled the sales of the consumer segment down in India.

The tainted talc has been snowballing into a massive threat for Johnson and Johnson for some time now — since 2016 to be exact.

As the pharma giant heads into 2019, investors started showing signs of paranoia — especially after the $4.69 billion compensation slapped on the company in July.

Then in December of 2018, a Reuters report alleged that Johnson & Johnson knew about the presence of cancer-causing asbestos in its talc products since 1971. The news agency cited unsealed court documents to back its findings. Shares slipped 11% then, wiping $45 billion from the company’s market value.

In the coming months, all eyes would be on the international giant on how it plans to tackle allegations and the corresponding sales slip.