Earnings Preview: What to expect from JPMorgan Q3 results?

JPMorgan Chase (JPM) is scheduled to report its third-quarter results before the opening bell on Friday. The banking giant is going to report results amidst rising interest rates, increasing oil prices and the ongoing trade wars between the US and China with no signs of respite for now. So here is what we can expect from the bank for the third quarter.

For the third quarter, the street expects JPMorgan’s earnings to grow 28% to $2.26 per share and revenue to increase 5% to $27.54 billion. With the bank’s history of consistent earnings beat over the years, one can expect the trend to continue for the third quarter.

If JPMorgan reports better-than-expected results, then analysts expect the stock to breach $120 levels. Earlier this year, the bank recorded its new 52-week high mark eclipsing $119 levels with the stock up nearly 8% in 2018. 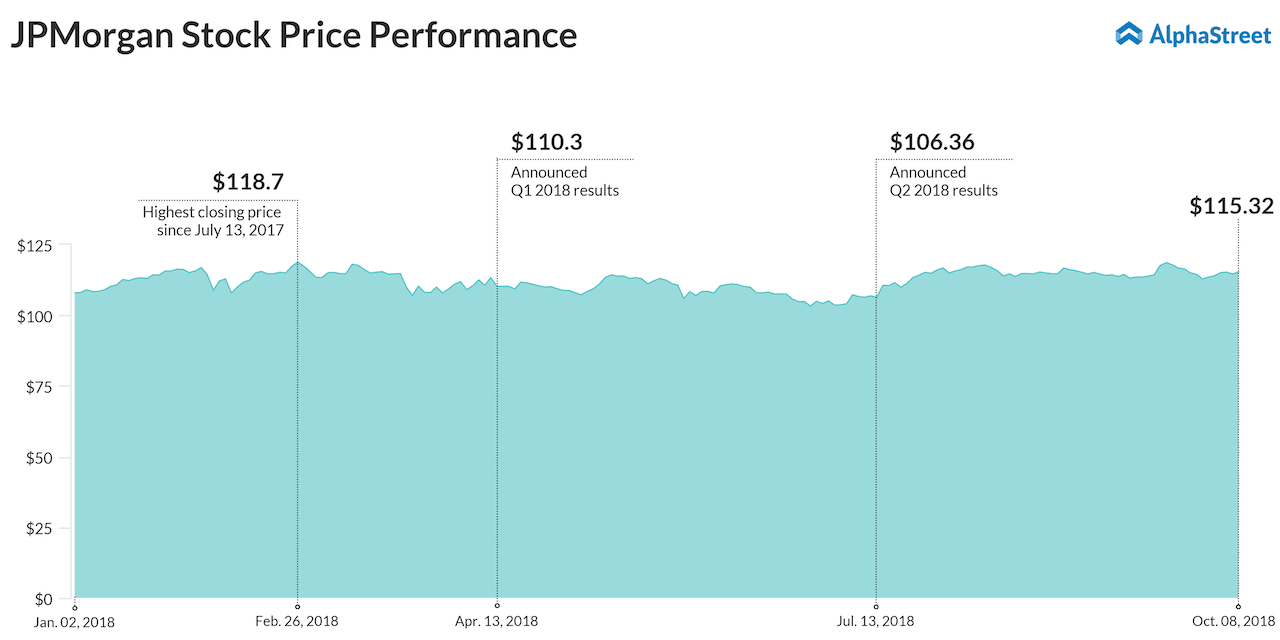 Last quarter Jamie Dimon commented that macro factors seem to be conducive and US consumer sentiment is upbeat, which resulted in the bank posting record results. The board also increased dividends to $0.80 per share from the third quarter compared to the $0.56 per share in the last quarter.

Two key factors of interest to analysts in the third quarter would be net interest margins and trading revenues. Net interest margin for the second quarter came in at 2.46% which was 2 basis points lower than the first quarter. Since this is an important measure for the bank’s profits, one should see whether JPMorgan is able to improve the margins.

Trading revenues jumped 13% to $5.4 billion in the second quarter beating street estimates, aided by the strong performance from equity and bond trading. Increase in trading transactions was primarily aided by the ongoing trading wars and volatile emerging markets which benefitted the bank.

On Monday, JPMorgan announced that it’s trimming its workforce in the mortgage banking division. The bank is planning to cut 400 jobs in the division due to lower loan originations because of the increase in interest rates. In addition, there is a lower supply of homes, which makes things even worse for the banks. It would be interesting to see how the division is going to perform in the third quarter and any additional insights from the management would be of interest to investors.