The retail environment has witnessed many changes in customers’ shopping behavior lately, especially after the COVID outbreak. With inflation putting pressure on personal finances, there appears to be a new shift in the way Americans prepare their family budgets. The Kroger Co. (NYSE: KR), a market-leading grocery chain, is poised to become stronger in scale and market share through a merger with Albertsons.

The fact that Kroger’s main stakeholders include billionaire investor Warren Buffett makes it a closely-watched stock, and the reasonable price adds to its appeal. The stock traded near the $50 mark last week, while recovering from the recent lows. It has declined about 20% after setting a new record early this year. Having hiked dividends on a regular basis over the years, KR offers a decent dividend yield. When it comes to buying, it makes sense to wait until a clearer picture emerges with regard to the Albertsons deal and the macro issues ease.

Kroger maintained stable profitability in the past few years when the broad market experienced high volatility due to the pandemic-related business disruption. All along, quarterly net income exceeded estimates, a trend that continued in the October quarter when adjusted profit climbed 13% annually to $0.88 per share.

After recovering from the negative territory more than a year ago, comparable sales picked up momentum and increased at an accelerated pace of 6.9% in the third quarter. That translated into total sales of $34.2 billion, which is up 7% and in line with the consensus forecast. Buoyed by the positive outcome, the management raised its full-year guidance. Of late, shoppers have been cutting down on discretionary spending, in response to record-high inflation, and spending more on daily essentials like groceries. 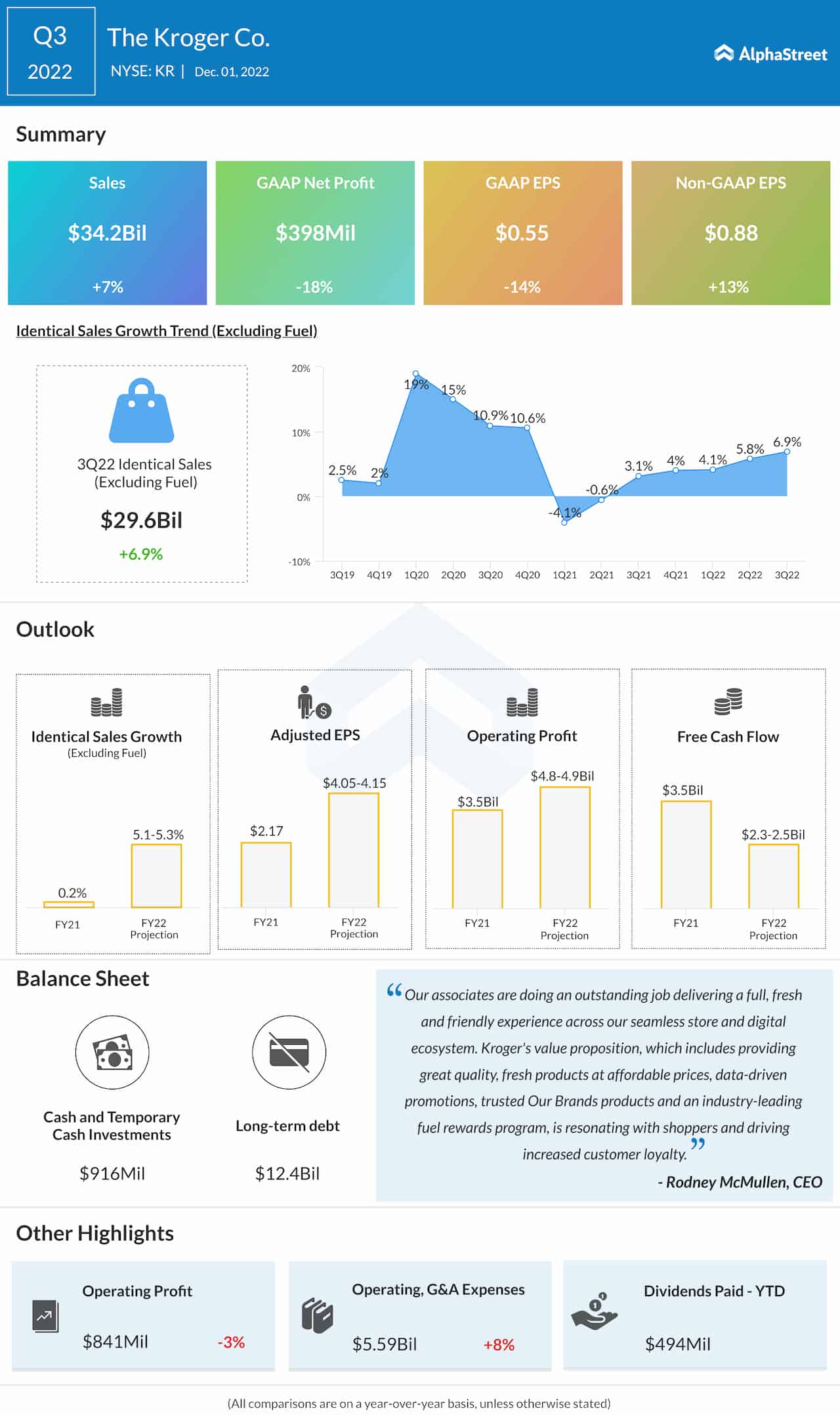 In mid-October, the management said it had signed a merger agreement with Albertsons, the biggest grocery chain in the U.S. after Kroger, which would mark the combination of two complementary organizations to establish a national footprint. The $25-billion transaction, which is expected to close in early 2024, is awaiting regulatory approval.

Meanwhile, there are concerns that the combination of the two grocery giants would stifle competition in the local markets and cause food prices to go up further. In an effort to allay those worries, Kroger’s CEO Rodney McMullen said the combined entity would still be much smaller than market leader Walmart, Inc. (NYSE: WMT). Recently, the big-box retailer raised its full-year outlook to reflect the uptick in grocery sales.

Defending the deal, McMullen said at the earnings call, “I shared with the senators that our merger will lower prices for customers starting day one, continued investments in our associates and stores and customer experience and do even more in our communities than either company can do alone. We believe this merger will allow us to fulfill these commitments to our customers, our associates, and our communities well into the future.”

Kroger’s shares ended the previous week on a low note, after trading lower throughout the last session. KR is currently hovering near its 52-week average.