Micron in cost-cutting mode after dismal Q1. What awaits in 2023?

The demand slump facing the electronics industry aggravated this year, mainly due to economic uncertainties, and it is affecting ancillary businesses like semiconductor companies also. The poor financial performance of memory chip giant Micron Technology Inc. (NASDAQ: MU) in the early months of fiscal 2023 underscores the severity of the crisis.

Micron’s first-quarter report, which is one of the most eagerly awaited announcements this earnings season, paints a dismal picture of the memory chip market right now. Adding to the pessimism, the management slashed its guidance and announced a 10% workforce reduction for the next year.

After closing Wednesday’s session lower, Micron’s stock lost significantly in the extended session as the first-quarter outcome caused a selloff. The last time the stock fell to such lows was about six years ago. It has been on a losing streak for more than 12 months now, and the current value is sharply below the January peak. It is safe to assume that the stock would recoup a major part of the losses next year, but the chip market volatility calls for caution. That said, MU seems to be at a buy point now. 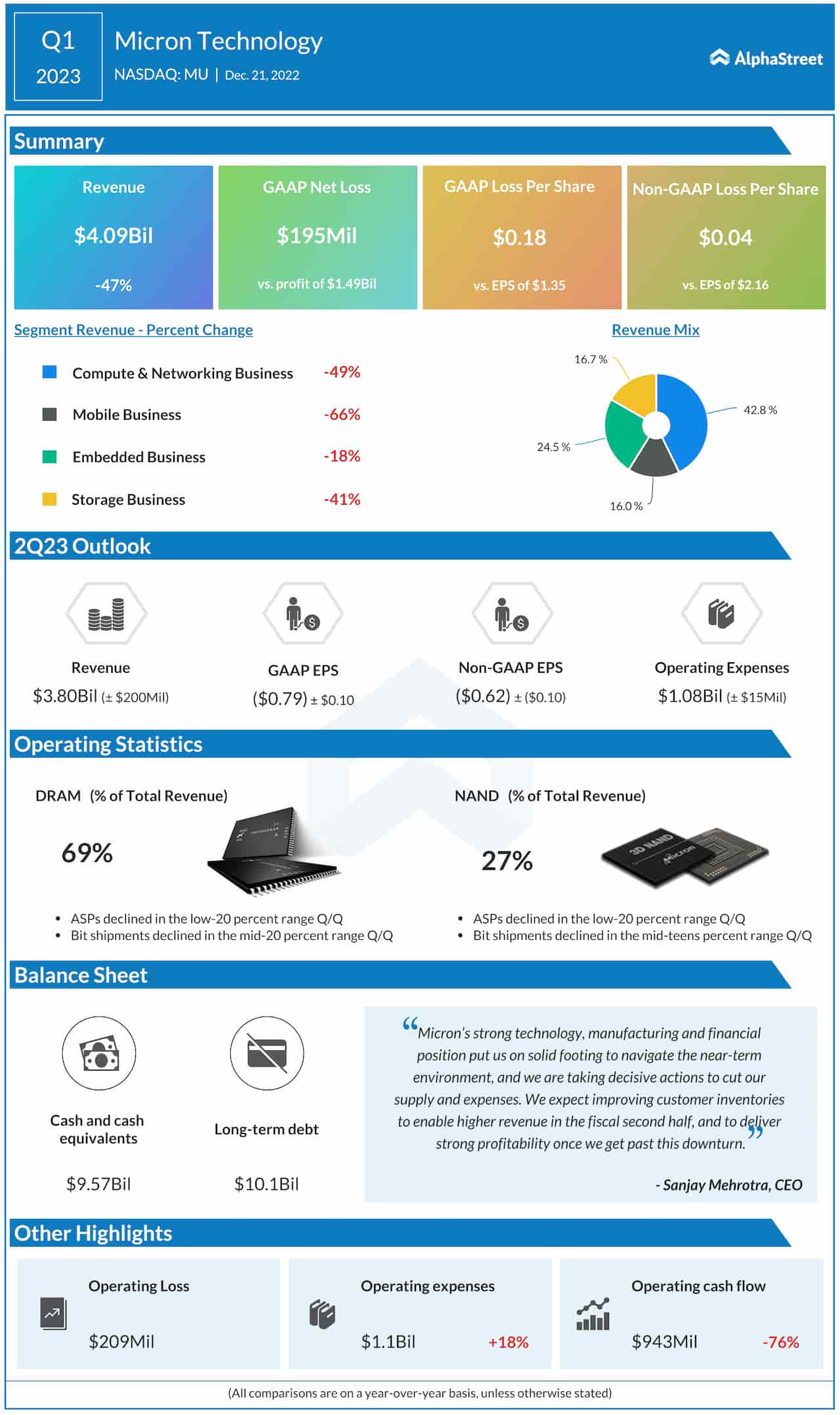 There is no doubt that Micron is a much better company than it was a few years ago and it continues to dominate the market in both DRAM and NAND chips. It is important to note that the current setback is not specific to the company. The semiconductor industry moves in a cyclical pattern, and Micron’s unimpressive Q1 performance can be attributed to the seasonal nature of the business to a large extent. Considering the demand issues related to memory chips, Micron’s problems are deeper than that of the broad semiconductor industry.

Certain chip segments are witnessing a fall in orders; at the same time, demand recovery is sluggish in most areas. The deteriorating pricing environment adds to the problem. While the supply-demand imbalance is likely to persist in the near future, inventory position at the customers’ end is slowly improving. However, the recovery is not fast enough to lift Micron’s profitability, which is likely to remain under pressure for the whole of 2023.

Commenting on the results, Micron’s CEO Sanjay Mehrotra said, “Longer term, we continue to expect strong demand growth across diverse end markets, with DRAM bit demand CAGR in the mid-teens percentage range and NAND bit demand CAGR in low to mid-20s percentage range. Our long-term demand bit growth expectations for both DRAM and NAND have declined from our expectation earlier this year primarily due to lowered growth expectations from PC and smartphone markets and some moderation in the strong long-term growth in the cloud.”

This week, Micron reported its first quarterly loss in about six years and the first earnings miss in as many years. On a per-share basis, adjusted loss was four cents in the first quarter when all four operating segments suffered double-digit contraction. At slightly above $4 billion, total revenue was down a dismal 47%. Taking a cue from the broad-based weakness and squeeze on cash flows, Micron executives cut their near-term outlook.

Continuing the downturn, the company’s shares traded down 4% on Thursday afternoon. They had gone through a series of ups and downs in the past six months, eventually losing 13% during that period.