Earnings preview: Will the North America retail curse catch up with Nike in Q2?

Nike Inc. (NKE) is touted to post its second-quarter results on Thursday, Dec. 20, after the market closes its regular trading for the day.

The Street expects the sports apparel maker to earn $0.45 per share on revenue of $9.16 billion for the quarter.

In the previously reported quarter, even though Nike’s North America segment recovered as total earnings jumped on strong revenue growth, the stock dropped sharply on higher costs and squeeze on margin.

The sneaker maker, then, was facing intense scrutiny over its controversial advertisement featuring Colin Kaepernick. However, the results exceeded Wall Street projections. Revenues of the NIKE brand then gained 10% and Converse moved up 7% during the previous quarter.

Back in May, CEO Mark Parker faced immense pressure over a sexual harassment scandal involving some senior executives, as several of them were shown the door after an in-house investigation. Trevor Edwards, the former president who was a prospective successor to Parker, was among those who stepped down.

Its ad campaign later in the year involving Kaepernick had also triggered a selloff initially, but the stock bounced back later. 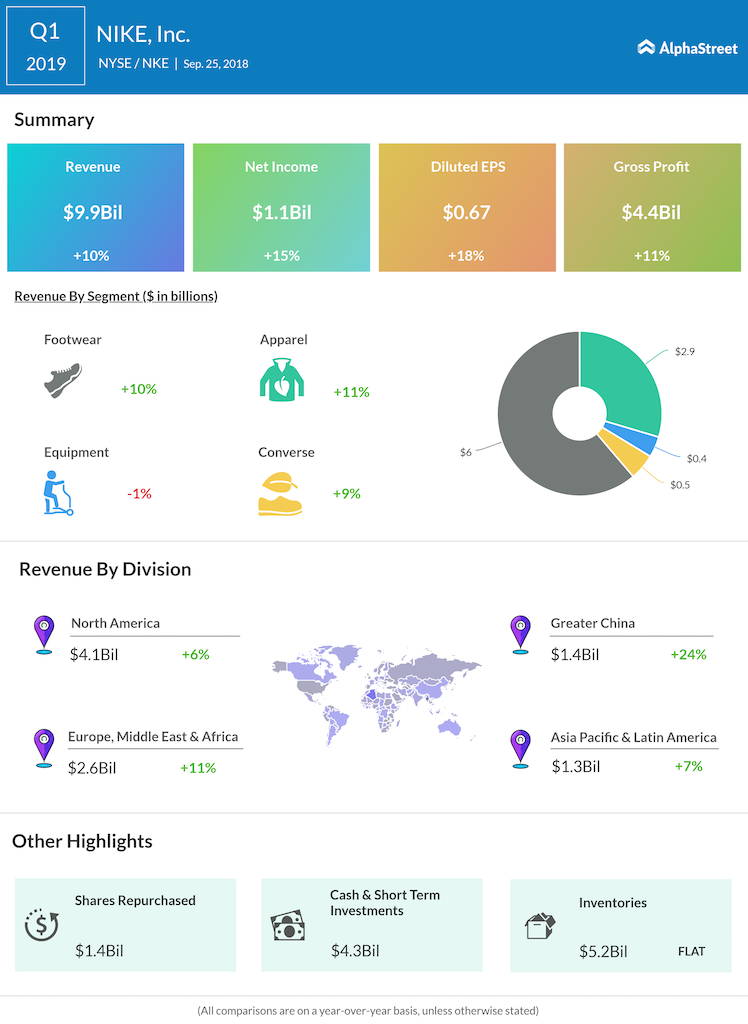 The North American market remains a challenge for sportswear manufacturers and footwear companies in general, with changing shopping habits and stiff competition. Nike’s competitor, Under Armour (UA) has been hit hard, with the launch of some of its premium brands fizzling.

Along with its ongoing organizational restructuring, Under Armour seems to have failed the confidence of investors, as its stock plunged about 10% last Wednesday when its investor day presentation hinted at low single-digit revenue growth in North America in the next five years.

Given that Nike also looks to its North America business for a big chunk of its top line, it might be a good time to focus more on international business.