PepsiCo (PEP) vs. Coca-Cola (KO): Which soft drink giant is a better investment?

PepsiCo, Inc. (NASDAQ: PEP) and The Coca-Cola Company (NYSE: KO) are market-leading consumer staples companies with many similarities, like their broad product portfolio and high-yield dividends. Unlike the majority of food & beverages companies, the soft drink firms were not severely affected by COVID-19 despite the movement restrictions and supply chain disruption, though they experienced a slowdown in sales.

The lingering uncertainty. amid the emergence of new virus variants, indicates sales might not rebound to the pre-crisis levels in the near future. The widespread lockdown weighed on summer sales, though things have improved after market-reopening picked up momentum. However, the growth plans of both Coca-Cola and PepsiCo remain intact. 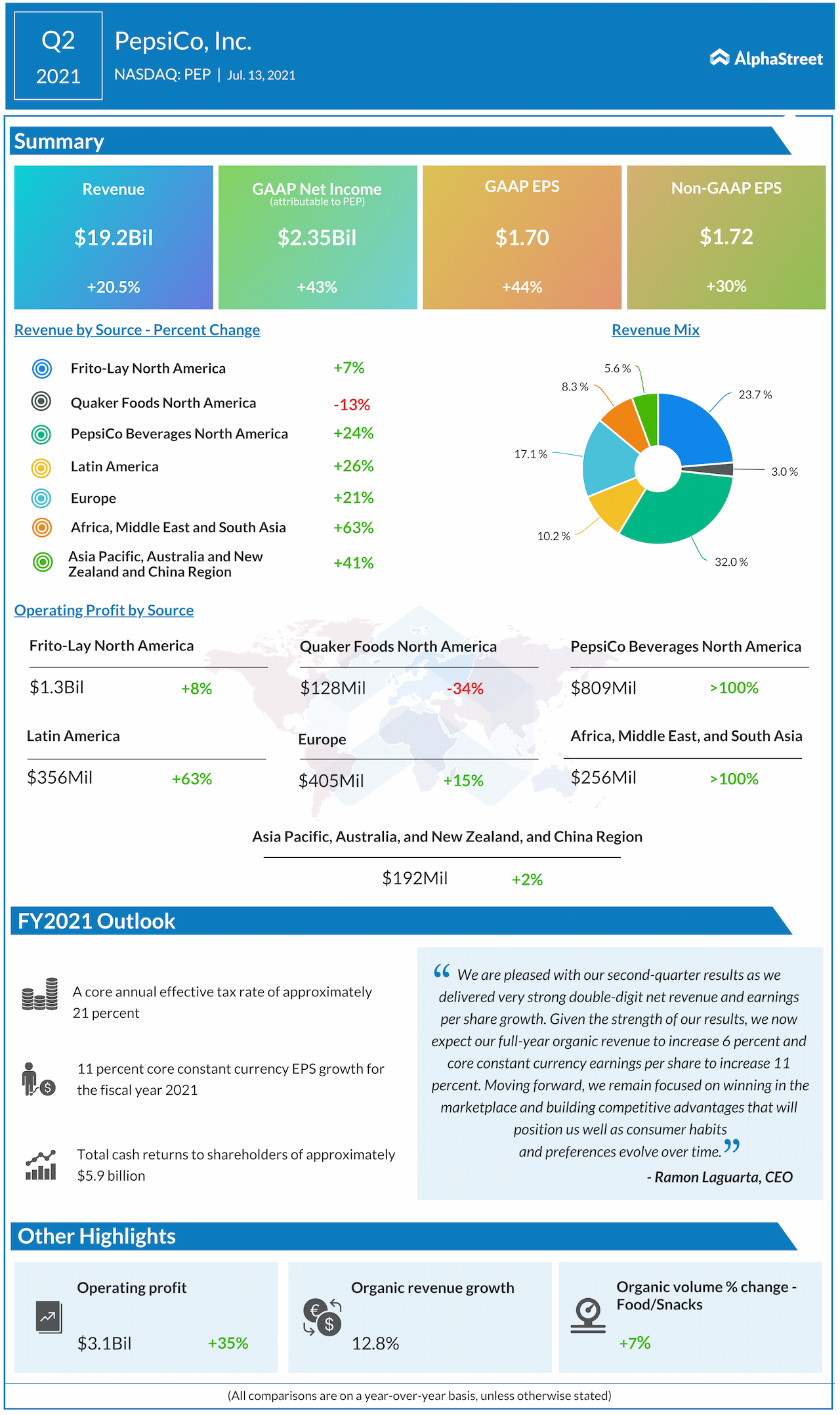 In the US, the companies are diversifying into alcoholic drinks – last year, Coca-Cola clinched a deal with beer maker Molson Coors to market and sell the alcoholic version Topo Chico sparkling water, while Pepsi is joining hands with The Boston Beer Company, Inc. (NYSE: SAM) to manufacture HARD MTN DEW alcoholic beverage.

While both companies are dividend aristocrats, Coca-Cola has a slightly higher forward yield of 2.96% than PepsiCo’s 2.72%. Currently, their annual dividends are $1.68 and $4.30 respectively, while PepsiCo has a lower payout ratio that gives it more flexibility when it comes to annual dividend hikes.  At 7.6%, PepsiCo’s annual dividend growth rate is higher than that of its rival, which would make it the preferred investment option for income investors.

On delving deep into the financial metrics and resources of these beverage titans, it becomes more clear that finding the winner among them is very difficult. But it would be interesting to check how the COVID-19 crisis affected them. It seems Coca-Cola’s extensive exposure to outdoor recreational facilities like cinemas, amusement centers, and restaurants weighed on sales since such facilities mostly remain closed.

Typically, people tend to spend less on outdoor meals and refreshments during times of recession, which is likely to have a lesser impact on PepsiCo since it has a relatively smaller presence in away-from-home channels like theme parks and theaters. In the first quarter of 2021, PepsiCo’s revenues and earnings grew at a much faster pace than those of Coca-Cola, but the latter improved its position in the latest quarter by posting stronger revenue and bottom-line growth. 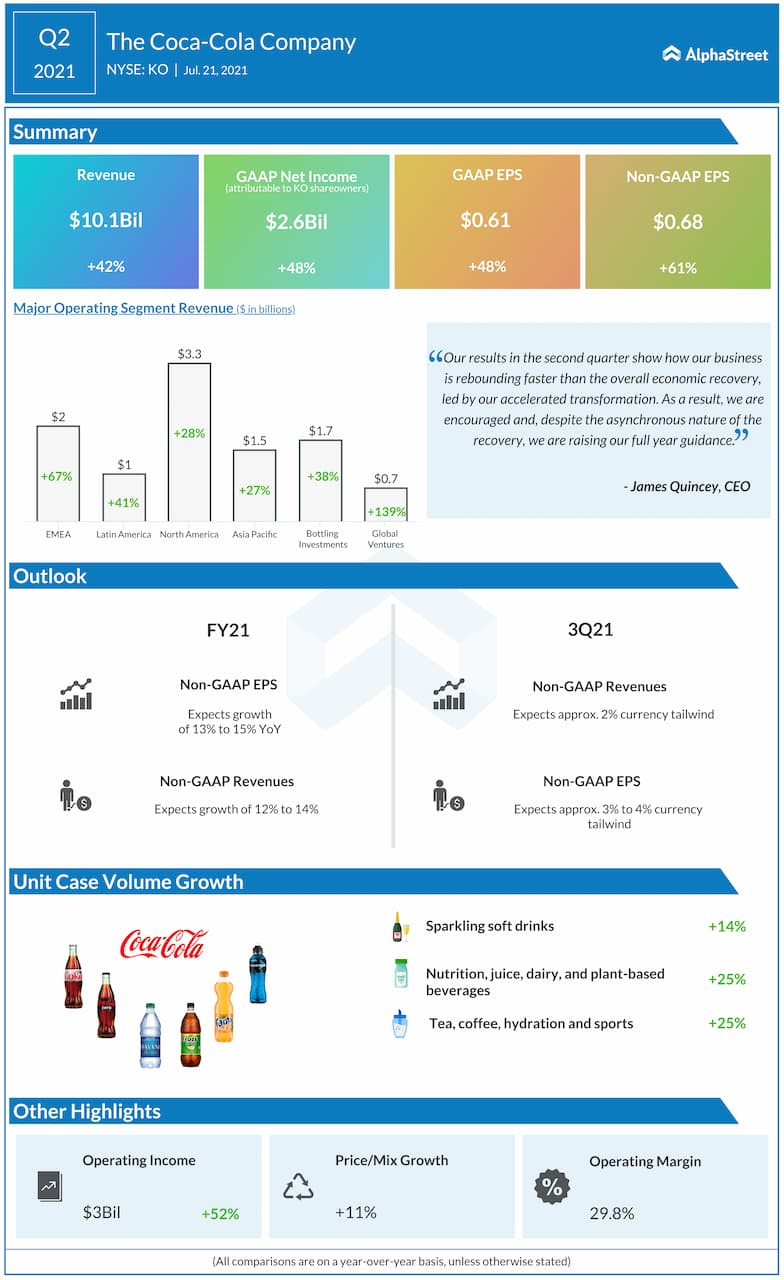 In the June quarter, PepsiCo’s revenue grew in double digits to $19.2 billion, which translated into earnings of $1.72 per share.  During the same period, Coca-Cola generated revenues of $10.1 billion, which is up 40% from the year-ago period, while adjusted earnings came in at $0.68 per share.  In the whole of fiscal 2020, Coke’s revenue declined 11% from the prior year, while PepsiCo’s topline rose by 4.8%.

After suffering a major loss when the market crashed in the early weeks of the pandemic, PepsiCo shares bounced back quickly and have made steady gains since then. They went past the pre-crisis levels and reached a record high in mid-August, before losing the momentum slightly. The pull-back offers a buying opportunity that is worth considering, especially since market watchers predict more gains in the coming months. Hovering near the $155-mark, the stock has been trading well above the 52-week average.

Last year’s selloff had a bigger impact on Coca-Cola’s stock, which fell from its peak to a multi-year low and is yet to fully recover. After recouping a part of those losses, the shares changed course and entered a volatile phase last month. They traded slightly higher on Thursday afternoon after closing the last session at $54.313. When it comes to choosing between the two stocks, PEP is likely to provide better value to investors because it is in a slightly more advantageous position than KO.