In a stunning turn of events in the densely populated Indian subcontinent, global conglomerate PepsiCo (PEP) is reported to have filed a lawsuit against four individuals — for growing potatoes in their fields.

According to India’s news media outlet The Hindu, four farmers from Gujarat—the state where the Prime Minister of India Narendra Modi hails from—were sued by PepsiCo in the tune of ₹1.05 crore (about $0.15 million) for growing the same variety of potato used in Lays chips.

PepsiCo, according to the media outlet, stated that that the damages are for ‘infringing its rights’. The case is expected to be heard in an Ahmedabad court this Friday.

Debating that such an instant could set a ‘dangerous’ precedent for other crops, farmers groups insisted that the law allows them to grow or sell any variety of crop or even seed—as long as they don’t sell branded seed of registered varieties.

The farmers also plan to invoke the Protection of Plant Varieties and Farmers’ Rights Authority (PPV&FRA) in India to support them in court and fund the legal costs through the National Gene Fund.

According to what a PepsiCo India spokesperson said to a Hindu reporter, “Given the issue is sub judice, it would not be proper to offer detailed comments.”

“These farmers are small, holding around 3-4 acres on an average, and had grown a potato crop from farm-saved seed after they accessed the potato seed locally in 2018,” according to the letter sent to the PPV&FRA by farmers groups as mentioned in the report by the local daily.

The Hindu story also states the farmers’ allegation that PepsiCo hired a private agency to feign as potential buyers to gather ‘evidence’ before filing the lawsuit. According to the letter, at least nine farmers in three districts have been charged since 2018.

In a similar case heard on April 6, an Ahmedabad commercial court directed an injunction against a few farmers, and even appointed a special commissioner to prepare evidence after collecting samples — this case is scheduled on April 26.

PepsiCo’s India arm is also not giving up without a fight, for it is reported that they invoked Section 64 of India’s Protection of Plant Varieties and Farmers’ Rights (PPV&FR) Act of 2001 to claim infringement of its rights. But the farmers’ defence cites Section 39 of the same Act, that states that a farmer is allowed “to save, use, sow, resow, exchange, share or sell his farm produce including seed of a variety protected under this Act” as long as they don’t sell the “branded seeds”.

A SMEAR AFTER A GOOD YEAR

It was only a week ago that the beverage giant PEP posted its first-quarter 2019 global earnings results, where it reported a 3% rise in revenues of $12.9 billion. The snapshot of how much money PepsiCo made in the past three months alone, is given below: 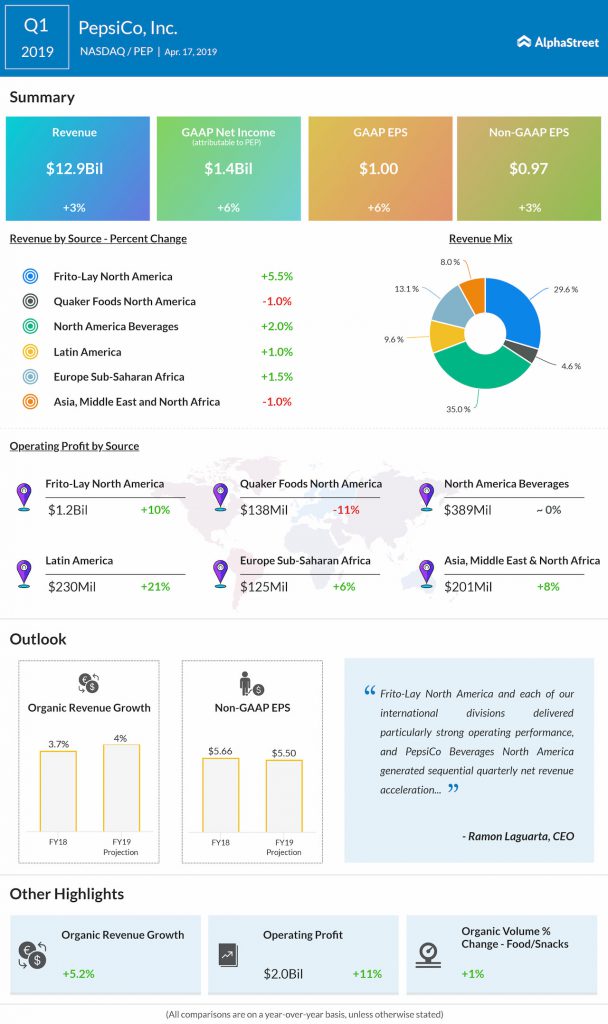 With both the top-line and bottom-line beating the market estimates, the Lays chipmaker has so far seen a glorius run in the US stock market so far.

Even looking ahead, PepsiCo expected an organic revenue growth to be 4% for fiscal 2019.

CEO Ramon Laguarta, had then weighed in, “While adverse foreign exchange translation negatively impacted our reported net revenue performance, our underlying organic revenue growth accelerated to more than 5% in the quarter.”

“We are equally pleased with the progress we are making on our ambitious agenda to invest to build capabilities, strengthen our brands, and add capacity to grow. With our strong start to the year and good momentum on our key priorities, we remain confident in achieving the 2019 financial targets we communicated earlier this year,” the PepsiCo chief added. We are yet to be clear on if the aggressive moves in international locations is part of its agenda.