Qualcomm (QCOM) swung to a loss of 35 cents per share in Q4 from a profit of 11 cents per share a year ago, primarily hurt by a patent battle with Apple (AAPL), as well as termination charges related to the discontinued acquisition of NXP Semiconductors (NXPI).

Adjusted earnings came in at 90 cents per share, higher than analysts’ expectations of 83 cents per share. Revenue for the quarter fell 2% to $5.8 billion but came in above analysts’ projection of $5.53 billion. Qualcomm shares fell over 3% in after-market trading on Wednesday. 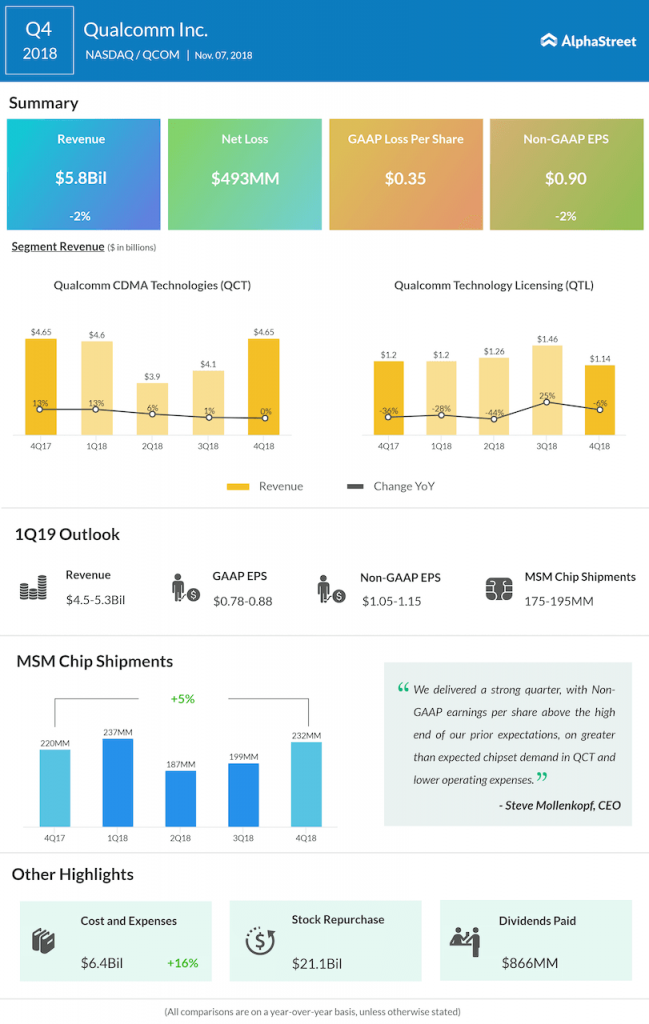 CEO Steve Mollenkopf said, “We delivered a strong quarter, with non-GAAP earnings per share above the high end of our prior expectations, on greater than expected chipset demand in QCT and lower operating expenses.”

“We are executing well on our strategic objectives, including driving the commercialization of 5G globally in 2019 and returning significant capital to our stockholders,” he added.

Various media outlets had earlier today reported that Apple is not planning to settle the $7 billion legal battle with Qualcomm, and was mulling a trial. CEO Mollenkopf had earlier stated that he was looking for an out-of-the-court settlement.

The stock has rallied about 50% from its 52-week lows in late April to touch a new one-year high in September. However, market-wide volatility and fears of an impending semiconductor sell-off have battered QCOM as of late.

Qualcomm sees a long-term partner in Apple despite disputes

Qualcomm has also announced its plan to set up a new manufacturing engineering and testing center in Hsinchu, Taiwan. The unit is expected to become operational in the first quarter of next year.