Qualcomm (QCOM) Wednesday reported a decline in second-quarter earnings and revenues, reflecting the ongoing slump in the semiconductor market. The results, however, came in above the market’s projection. Meanwhile, the stock dropped sharply during the after-hours session as the company’s guidance fell short of expectations. 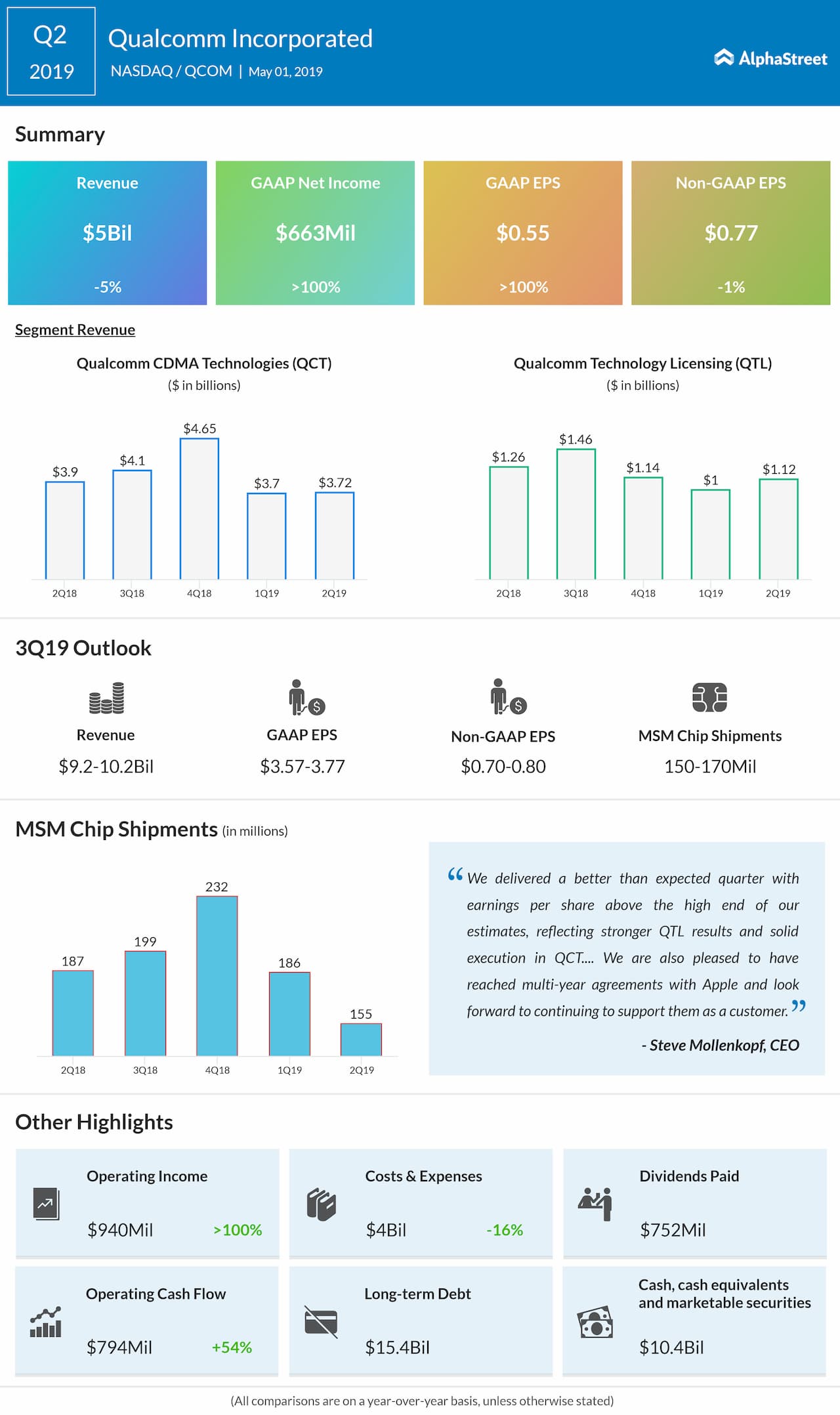 The San Diego, California-based chipmaker reported adjusted earnings of $0.77 per share on revenues of $4.98 billion for the March quarter, down 1% and 6% respectively from last year.  The downturn reflects a 4% dip in revenues of the CDMA Technologies segment to $3.72 billion and an 8% decline in Technology Licensing to $1.12 billion. The results, however, came in above the estimates of market watchers.

Steve Mollenkopf, CEO of Qualcomm, said, “We are executing well on our strategic priorities as 5G  commercial launches begin around the world. Our 5G technology and product leadership, as well as our  expansion into new industries and product categories, creates a strong foundation for long-term revenue  and earnings growth.”

The management currently expects third-quarter adjusted earnings to be in the $0.70-$0.80 per share range, representing a 20-30% decline from the year-ago period. Unadjusted earnings are forecast to be between $3.57 per share and $3.77 per share. There will also be an estimated 15-25% decrease in MSM chip shipments to 150-170 million units.

Total adjusted revenues are projected to decline to $4.7-$5.5 billion in the June quarter, with Technology Licensing revenues contracting 8-15% to the range of $1.23 billion to$1.33 billion.

Mollenkopf added that the multi-year agreements with Apple (AAPL), pursuant to the recent settlement of patent cases, have strengthened the business relationship between the companies. Going forward, Qualcomm bets on its 5G technology and product leadership to drive growth.

In the third quarter, reported revenues will include about $4.7 billion from the settlement with Apple and estimated technology licensing revenues related to royalties due from Apple and its contract manufacturers for sales during the period.

Earlier this month, Qualcomm announced the signing of settlement agreements with Apple and its contract manufacturers to dismiss all outstanding litigation between the two companies.

Rival chipmaker Intel (INTC) last week reported flat revenues for the first quarter. Earnings, however, moved up 2% annually to $0.89 per share. Among others, Advanced Micro Devices (ADM) recorded double-digit decline in first-quarter earnings and revenues – to 6 cents per share and $1.27 billion respectively. Both numbers topped the Street view.

Qualcomm’s shares surged 23% mid-April after the settlement with Apple and are currently trading near the peak they had reached about two decades ago. The stock, which gained 65% in the last twelve months, closed Wednesday’s session higher. However, It lost about 4% in the after-hours session following the earnings report.