Southwest Airlines (NYSE: LUV) reported its earnings results for the first quarter of 2019 on Thursday before the opening bell.

Analysts expected the company to earn 61 cents per share on an estimated revenue of $5.12 billion for the period. While earnings beat estimates, this was not the kind of numbers that gave the market confidence in the stock. Headwinds in the quarter did not help, either.

Regarding the factors affecting the results, Southwest pointed out “several unexpected events during first quarter 2019 that contributed to a negative revenue impact of more than $200 million.” According to the carrier, these factors included “the MAX groundings, unscheduled maintenance disruptions in connection with efforts to reach a TA with AMFA, severe winter weather, the U.S. government shutdown, and softer leisure revenue trends.”

“The negative impact of these events to first quarter 2019 year-over-year RASM was approximately two points,” said Southwest in a statement. 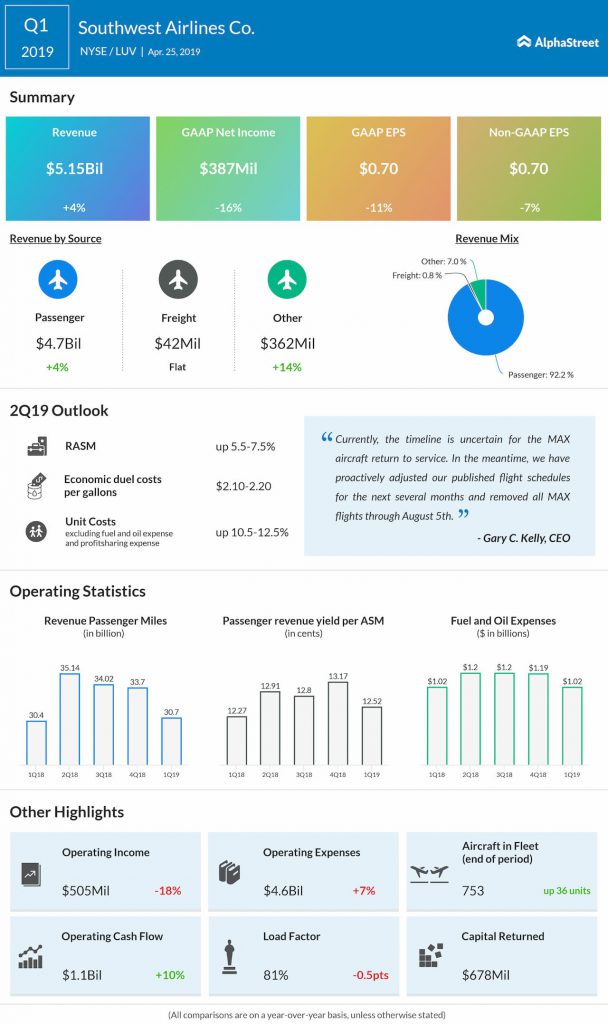 However, all is not bad for Southwest, as “other expenses” in the quarter shrunk to $1 million from $14 million a yar ago — with the $13 million decrease in costs due to the higher interest income in the new quarter. Meanwhile, Southwest continues to estimate its annual 2019 effective tax rate to be about 23.5%.

However, the Boeing 737 MAX groundings will affect the upcoming quarter results, as Southwest now expects Q2 fuel efficiency to be flat to down 1% year-over-year. Based on Southwest’s existing fuel derivative contracts and market prices as of April 18, 2019, Q2 2019 economic fuel costs are now estimated to be in the range of $2.10 to $2.20 per gallon.