The Boeing Company (NYSE: BA) is staring at one the most challenging time in its history, with the credibility of the aircraft maker being questioned after the recent crashes that resulted in the grounding of the 737 MAX jets across the world. In the backdrop of all this, Boeing announced its first-quarter 2019 earnings on Wednesday before the opening bell.

Ever since last month’s deadly crash, airline carriers have been cutting orders for the aircraft that was touted as the most advanced model ever built by Boeing.

On a non-GAAP basis, core operating earnings slumped 21% to about $2 billion, with core earnings falling 13% to $3.16 per share.

The market expected a double-digit decline in earnings in the commercial airline division, with the consensus estimate for net earnings at $3.33 per share on revenues of $23.51 billion. Both numbers missed these estimates. 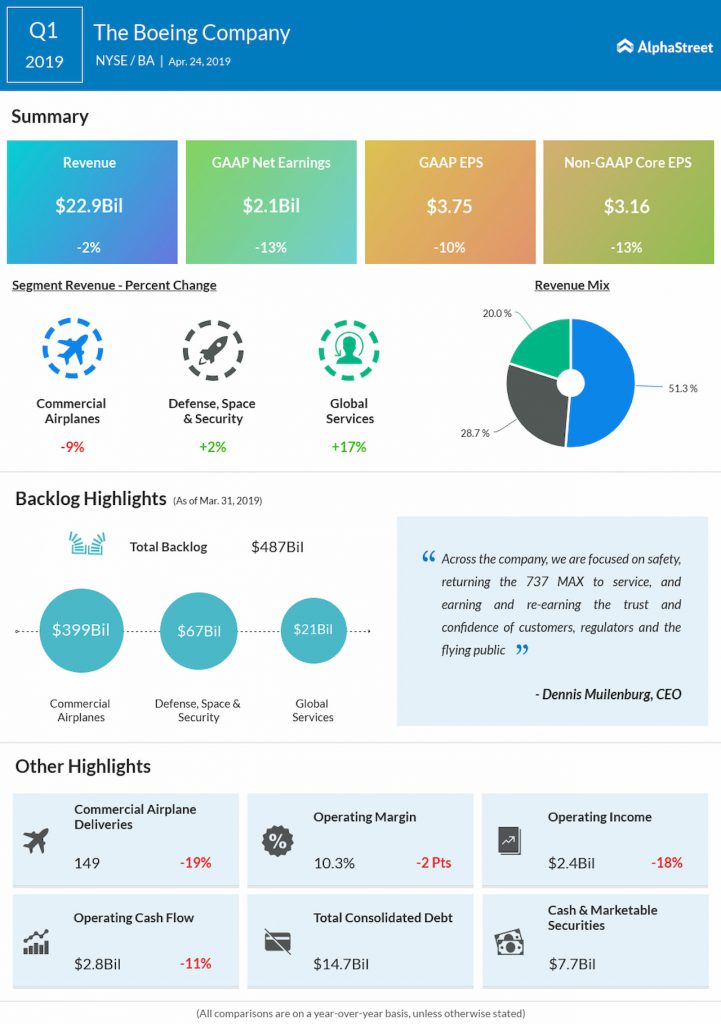 “Across the company, we are focused on safety, returning the 737 MAX to service, and earning and re-earning the trust and confidence of customers, regulators and the flying public,” said Boeing Chairman, President and CEO Dennis Muilenburg.

In the second week of April, the Boeing stock fell after the US-listed aircraft maker announced its decision to cut production of its 737 MAX aircraft — sending shares of aerospace groups Meggitt, Melrose and Safran down as well.

This came right after Boeing started the month with its decision to cut its monthly 737 aircraft production by about 20%. Due to this uncertainty, Boeing deferred from giving an update on its future. “Due to the uncertainty of the timing and conditions surrounding return to service of the 737 MAX fleet, new guidance will be issued at a future date,” read an official statement from Boeing.