Despite total operating revenues rising 8.5% to $5.7 billion in the fourth quarter of fiscal 2018, Southwest Airlines (LUV) saw its net profit slide more than 60% to $654 million or $1.17 per diluted share. However, both the top line and bottom line beat analyst estimates.

Analysts expected Southwest Airlines to post earnings of $1.07 per share on revenue of $5.67 billion for the fourth quarter. 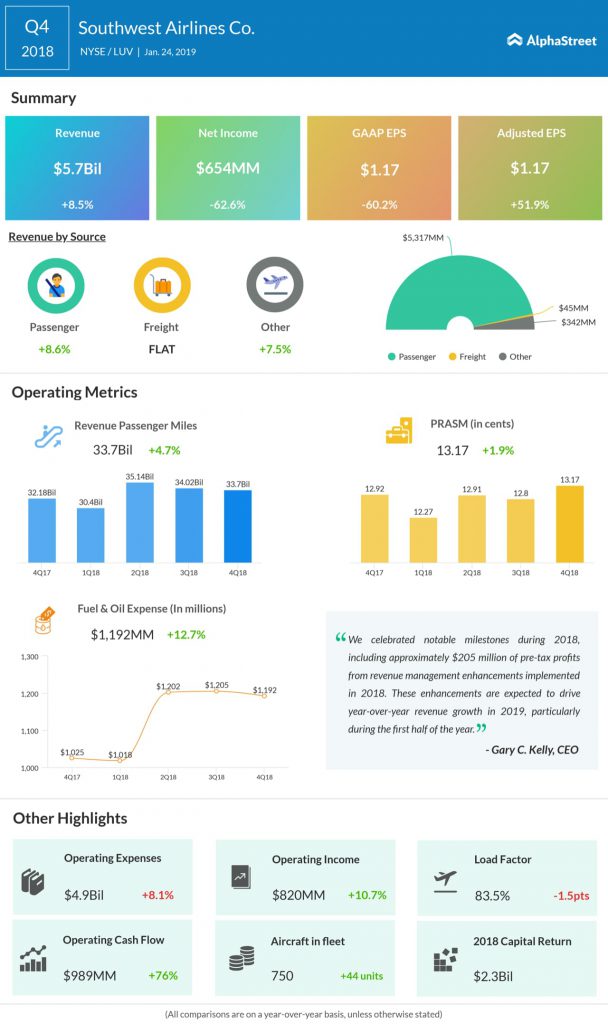 “We celebrated notable milestones during 2018, including approximately $205 million of pre-tax profits from revenue management enhancements implemented in 2018. These enhancements are expected to drive year-over-year revenue growth in 2019, particularly during the first half of the year,” said CEO Gary C. Kelly.

The profit fall is in line with the expected impact of the fuel price estimate, which remained at a pretty high level for the fourth quarter.

Regarding the Hawaii situation, CEO Kelly weighed in, “Hawaii remains our expansion focus for 2019, and we are in the final phase of obtaining authorization from the Federal Aviation Administration (FAA) for Extended Operations (ETOPS) to operate between California and the Hawaiian Islands. Our remaining work is currently suspended until the government reopens and the FAA is allowed to resume normal certification activities. We are well-prepared to perform the next steps in the ETOPS application process. We are anxious for the government to resolve this shutdown so we can bring low fares and a boost to Hawaii’s travel and tourism industry.”

Southwest also announced that it plans to cease operations at Benito Juárez Mexico City International Airport by March 30, 2019, and reallocate these resources to other locations. The carrier said it continues to expect FY 2019 available seat miles to rise to as high as 5% year-over-year.