Stock Watch: Here’s a look at the pros and cons of investing in PayPal (PYPL)

For payment solutions firm PayPal Holdings Inc. (NASDAQ: PYPL), 2022 has been a mixed year, with the business benefitting from tailwinds from the digital payments boom initially, and later experiencing weakness as the momentum wanes amid the e-commerce slowdown and increasing strain on people’s spending power.

Since hitting a record high more than a year ago, PayPal’s stock has been in a free fall and traded below its long-term average lately. The valuation hit an all-time low a few weeks ago, before partly recouping later. The stock has probably reached a level from where it cannot go down further, which is good news for prospective investors looking for a safe entry point.

Since the factors weighing down PYPL are temporary in nature, the stock has the potential to rebound when market conditions become favorable – around 40% growth that would drive it beyond the $100-mark, according to analysts. Being a key player in the thriving payment solutions industry, PayPal will not disappoint long-term investors as the demand for its services would keep growing in the foreseeable future.

That said, the ongoing slowdown in payment volumes could continue to put pressure on margins and profit in the near term. Also, the company has not been able to expand its user base meaningfully after setting the ambitious target of doubling the number early this year. To some extent, the slump can be attributed to the completion of eBay’s exit from the platform. 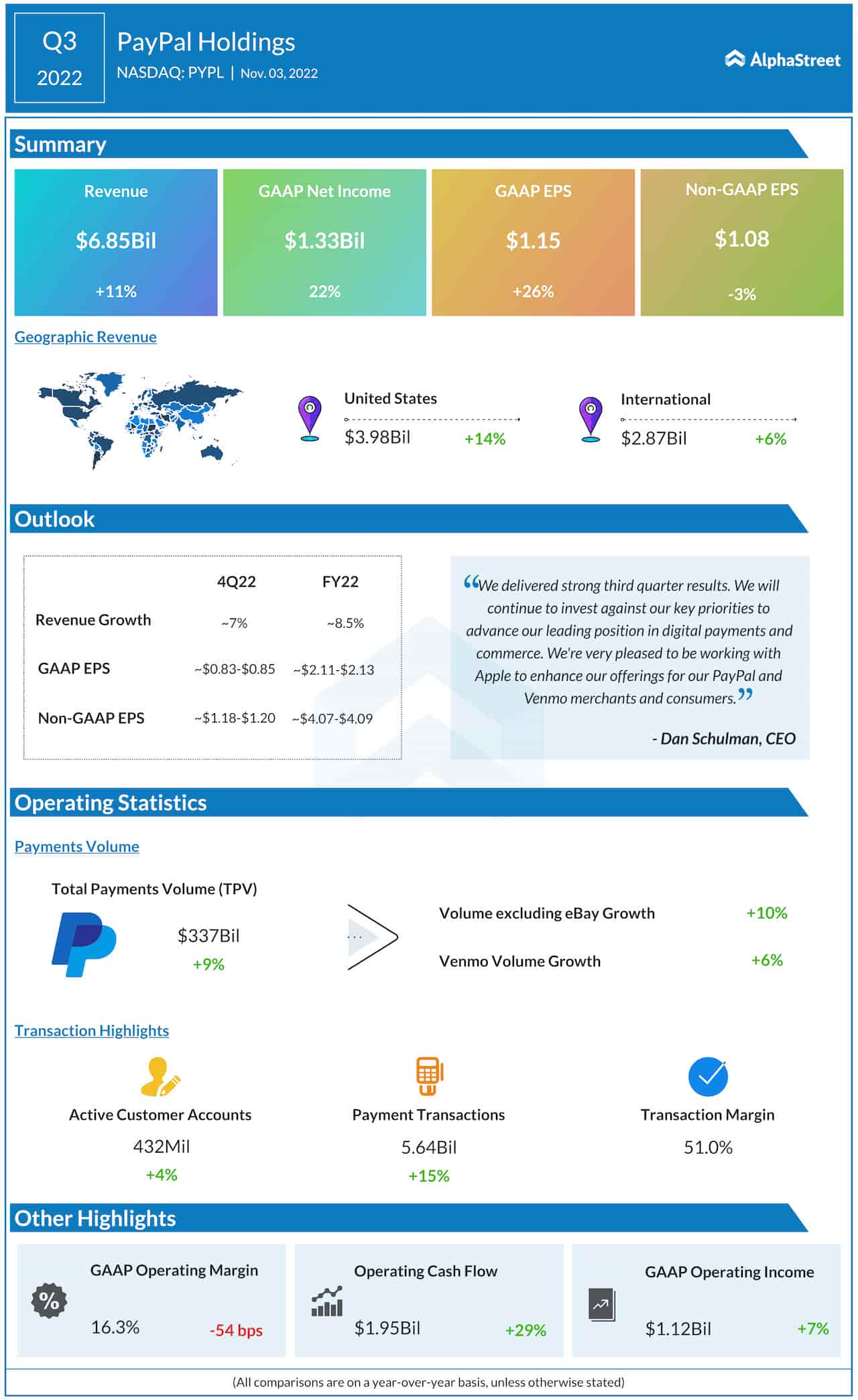 Meanwhile, the recent partnership with Apple Inc. (NASDAQ: AAPL), which allows PayPal consumers and merchants to access Apple Pay, is a bright spot. The management bets on its cost-saving efforts and promotional initiatives like the rewards program to revive the growth momentum as it nears the new fiscal year.

In the third quarter, earnings and revenues topped expectations, as they did in the previous quarter. Total revenues increased in double digits to $6.9 billion during the three-month period, aided by strong demand both in the US and international markets. However, adjusted earnings dropped 3% to $1.08 per share. At $337 billion, total payments volumes were up 9% year-over-year.

“With 35 million active merchant accounts and nearly 400 million active consumer accounts, our scale is like few others in the world and represents a substantial competitive advantage in a business that is driven by network effects. In addition, we’ve built a high level of trust with our customers. It drives significant preference to use our branded marks for online transactions. We’ve continued to grow faster than overall e-commerce in Q3 with our total TPV up 14% FXN, demonstrating the competitive differentiation and diversification of our global platform,” said PayPal’s CEO Dan Schulman at the Q3 earnings call.

PayPal’s stock has fallen a dismal 59% since the beginning of 2022. It suffered a fresh blow soon after last week’s earnings release but regained a part of the losses in the following sessions. It traded higher in the early hours of Tuesday’s session.