Tapestry (NYSE: TPR) reported a 30% dip in earnings for the fourth quarter due to higher costs and expenses. The bottom line came in line with the analysts’ expectations while the top line missed consensus estimates. Further, the luxury accessories and lifestyle brands retailer guided revenues and earnings for the first quarter and fiscal 2020 below the Street’s view.

Net income fell by 30% to $149 million or $0.51 per share. In the previous year quarter, the company recorded a favorable tax benefit associated with tax legislation changes as well as a one-time reversal of valuation allowances.

Adjusted earnings rose by 2% to $0.61 per share helped by lower weighted average shares outstanding. Net sales were $1.51 billion, an increase of 2% on a reported basis and 4% in constant currency. 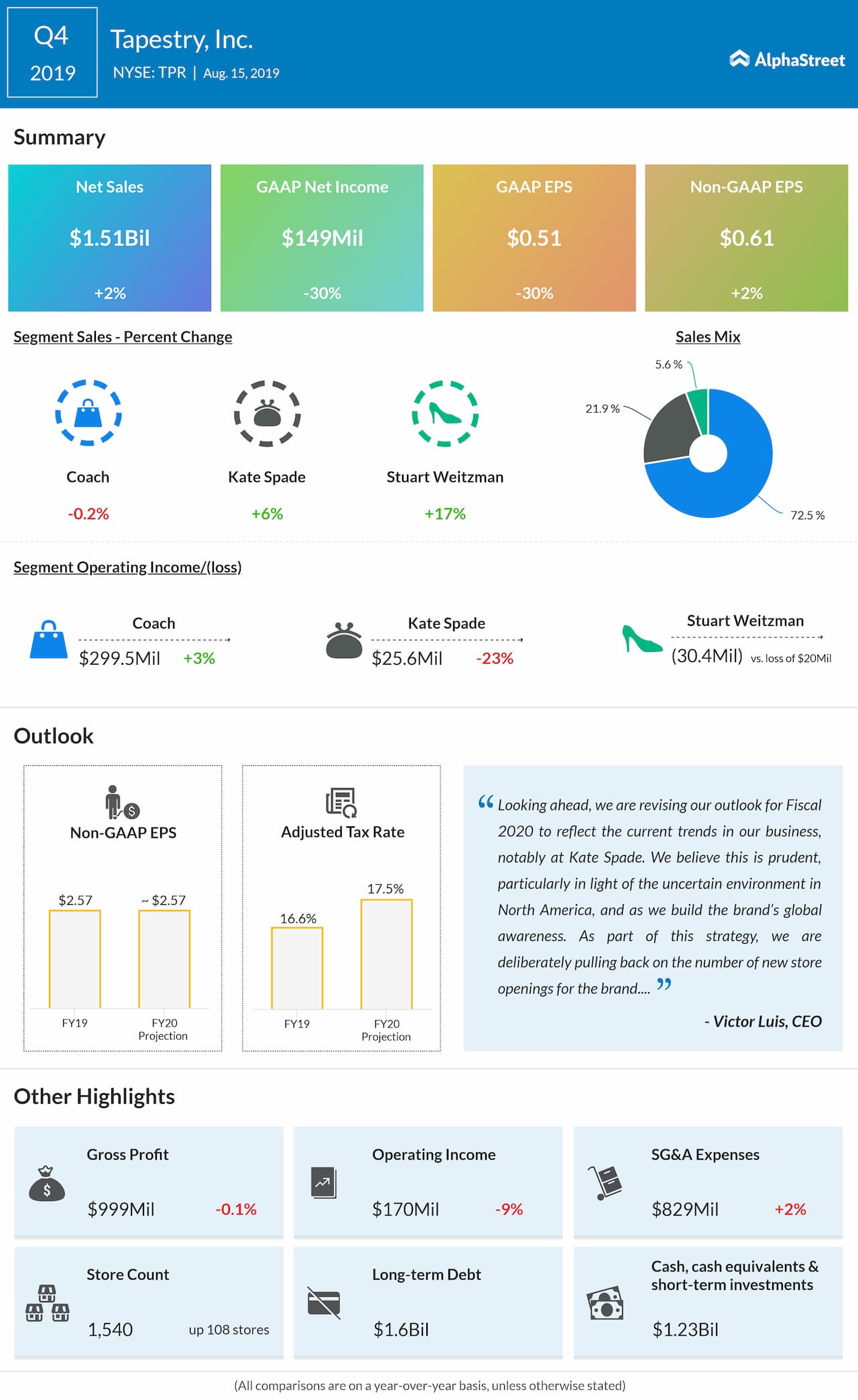 Looking ahead into the full year 2020, the company expects revenues to increase at a low-single-digit rate from last year and earnings per share to be about even with the prior year. The primary change from the prior outlook is the expectation for more modest topline growth at Kate Spade in North America, impacting the company’s ability to leverage its strategic investments and fixed costs.

For the first quarter, the company projects revenues to be slightly below prior year and EPS to decline on a year-over-year basis. The outlook includes the continued impact of the company’s foundational strategic initiatives, including investments in new stores openings, distributor buybacks as well as systems.

While long-term vision is unchanged, Tapestry is modifying capital allocation policy in fiscal 2020, dedicating its resources to driving organic growth and does not expect to pursue strategic acquisitions. Also, the company plans to return about $700 million to shareholders in fiscal 2020 through dividends and share repurchases.

For fiscal 2020, the company continues to expect top and bottom-line growth at Coach and profitability improvements at Stuart Weitzman. Net interest expense for the year is expected to be $45 million to $50 million and the tax rate is projected to be in the area of 17.5% for the full year.

The current trends of business, notably at Kate Spade, has prompted Tapestry to revise its outlook for fiscal 2020. This is particularly in light of the uncertain environment in North America, as the company builds the brand’s global awareness. The company is deliberately pulling back on the number of new store openings for the brand in order to focus on maximizing productivity.

For the fourth quarter, sales from Coach remained even with the prior year on a reported basis, or an increase of 2% on a constant currency basis. Global comparable store sales increased 2%, including a benefit of about 150 basis points driven by an increase in global e-commerce.

For the fourth quarter, the company began its share buyback program, repurchasing about 3.4 million shares of its common stock for a total of about $100 million. At the end of the period, $900 million remained under the company’s current repurchase authorization. Also, the company’s board declared a quarterly cash dividend of $0.3375 per common share, payable on September 30, 2019, to shareholders of record on September 6, 2019.