Q1 2019 Earnings Preview: What will happen to Twenty-First Century Fox under Disney?

Twenty-First Century Fox, Inc. (FOXA) has ushered in quite an era of news and entertainment in the US. However, on Thursday, Nov. 1 — barely a week before it posts first-quarter earnings results on Nov. 7 — the stock jumped 2.24%, closing at $46.54.

For the first quarter of fiscal 2019, the media giant is expected to post earnings of $0.54 a share on an estimated revenue of $7.31 billion.

Given how trading volume indicates a market trend or its reversal, it would be amusing to see what the company has in store for investors this earnings season.

Hulu and Fox: What lies ahead as they enter the Disney family?

Analyst ratings for the $86-billion company are between BUY and HOLD, which shows that the market has confidence in the stock. P/E estimate stands at 27.22.

Another thing that investors will look to is the effects of The Walt Disney (DIS) deal. With franchises like X-Men, Star Wars and Avatar jointly looking like blockbuster property, Disney’s movie profits seem to be imparting further positivity to the Fox stock. The massive content repository, along with Hulu holdings, could also post a competitive threat to streaming giants Netflix (NFLX) and Amazon (AMZN) Prime. 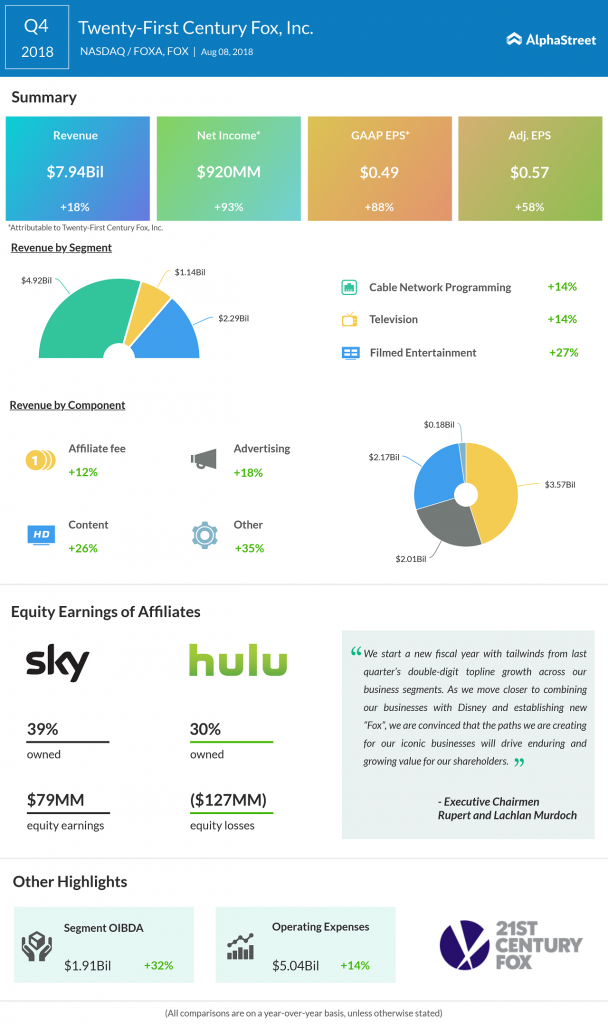 Fox last posted its quarterly results back in August, performed well in the period quarter with a 58% earnings jump to $0.57 a share, beating estimates. Revenues soared 18% last quarter to hit $7.94 billion. Let’s hope the company continues this spree, especially with added sentiments on the Disney deal and the general trend in trading activity.