Shares of the world’s biggest rental firm United Rentals (NYSE: URI) jumped 6% after the bell as the company reported solid Q4 results. This is the first quarter for the rental firm to report results under the helm of Matthew Flannery as its CEO. It’s worth noting that Flannery was elevated from COO to CEO earlier this month.

Revenue increased 20% to $2.3 billion while adjusted earnings came in at $4.85 per share aided by strong volume growth and improvements in rental rates. Fourth quarter top line numbers exceeded street consensus while EPS came in slightly below what analysts were projecting.

Analysts expected United Rentals earnings to come in at $4.9 per share on revenues of $2.22 billion. Last year for the same period, the company reported EPS of $3.34 with sales touching $1.92 billion. 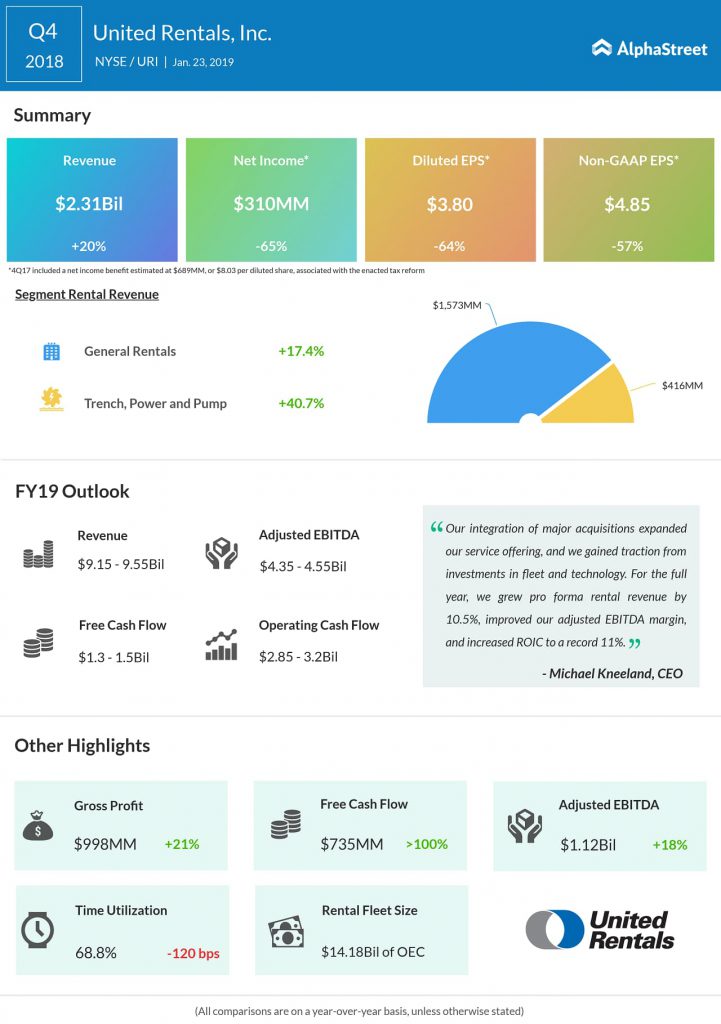 Rental revenues which contribute lion’s share to United Rentals’ sales jumped 20.8% to $1.98 billion while time utilization, on an adjusted basis, decreased 60 basis points due to BlueLine and BakerCorp deals.

United Rentals has been on a shopping spree since 2017. The company acquired NES Rentals and Neff in 2017 followed by BakerCorp, BlueLine and WesternOne Rentals last year. These deals are expected to expand its product offerings and geographical reach which would augur well to its earnings in the immediate future.

For 2019, the rental company expects revenue to be between $9.15 billion to $9.55 billion, while adjusted EBITDA to come in the range of $4.35 billion and $4.55 billion. Excluding merger-related charges, free cash flow is projected to be in the $1.3 billion to $1.5 billion range.

The company’s stock has nosedived nearly 38% in the last 12 months due to the cyclical nature of the business, which is closely tied to the health of the economy. After hitting the 52-week low level in December, United Rentals has recovered with its stock price up nearly 13% in 2019.