The world’s largest department store chain, Walmart (WMT), is reporting fourth-quarter financial results on Tuesday, February 19, before the regular trading hours. The market expects Walmart to post a 2.2% growth in revenue to $139.30 billion, which will likely be helped by improved digital sales.

During the last reported quarter, the top line growth was pegged at 1.4%.

Meanwhile, adjusted earnings are expected to be flat year-over-year at $1.33 per share, likely to be hurt by its investment in Indian e-commerce major Flipkart.

In May last year, Walmart had acquired a 77% stake in Flipkart for about $16 billion, pitting itself against Amazon (AMZN) in a budding e-commerce market. However, things haven’t been going as smooth in India as Walmart might have expected.

It was revealed in a recent report by Barclays that Amazon had already taken a lead over the domestic rival, within just 5 years of its entry into the Indian market. Amazon is now India’s biggest online shopping platform, with its Gross Merchandise Volume 20% higher than Flipkart.

Additionally, the country recently issued a new ruling that bars e-commerce companies from selling to firms where they have a stake. This comes as a spoiler to e-commerce majors who had been using B2B firms as intermediaries to sell products at a discounted rate.

Meanwhile, the Bentonville, Arkansas-based retailer’s investments and partnerships in the grocery business is expected to see results in Q4. Despite heavy competition, Walmart has been successful in maintaining a steady lead in the grocery business, compared to other rivals including Kroger (KR), Target (TGT) and Costco (COST).

Investors will also be looking at Walmart’s e-commerce sales growth, which came in at a stellar 43% in the third quarter. Online sales at Sam’s Club had jumped 32% during this period.

Last month, brokerage firm Morgan Stanley upgraded its rating on Walmart to overweight from equal weight and lifted the price target to $110 from $107, citing the stability of the stock despite the bearish earnings outlook for the retail industry. 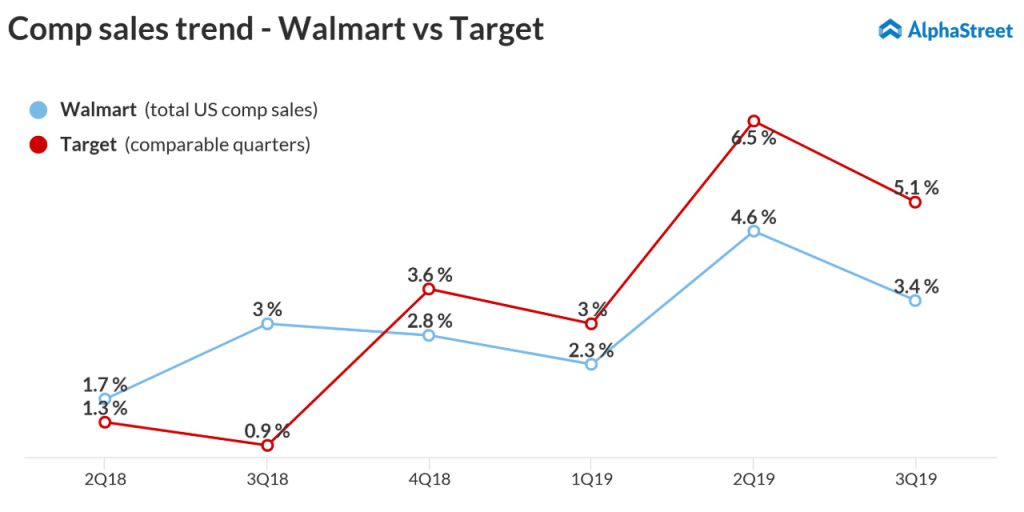 Walmart Inc. surpassed market expectations on earnings for the third quarter of 2019, but revenues came in shy of the street consensus. The stock was up 0.5% immediately following the announcement.