The company’s Q2 revenues dwindled 20.6% to $4.2 billion hurt by lower demand from its clients across all its divisions. Adjusted earnings came in at $1.45 per share failing to meet analyst estimates.

Last quarter, the company expected Q2 revenues to be between $4.2 billion and $4.4 billion and adjusted earnings in the range of $1.45 to $1.65 per share. Despite failing to meet street estimates, Western Digital’s results were in line with its Q2 outlook provided last quarter.

Analysts expected Western Digital’s adjusted EPS to come in at $1.49 and revenue of $4.25 billion taking into account the tough macro headwinds faced by the firm. It’s worth noting that for the corresponding period last year, revenue was $5.34 billion with earnings of $3.95 per share aided by income tax benefits. 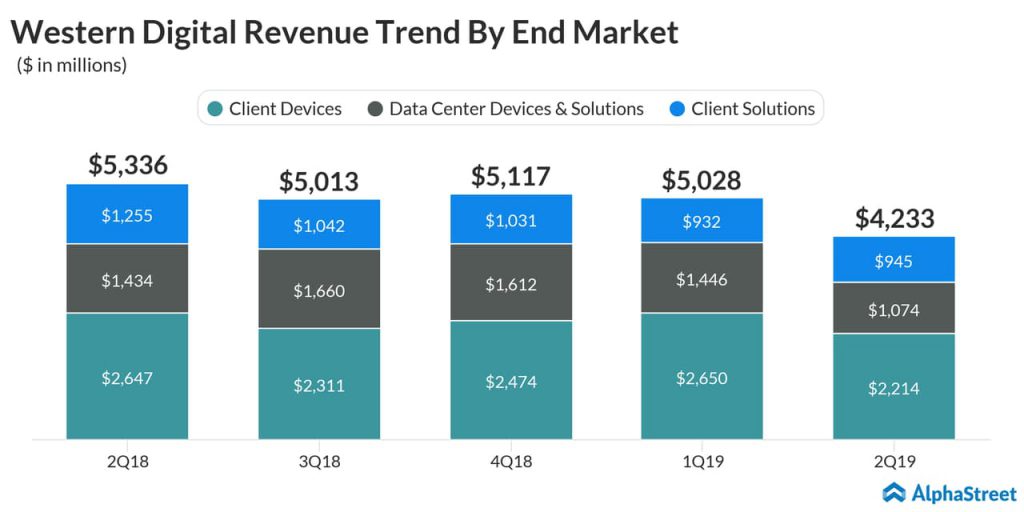 From an end market perspective, Client Devices reported a 16.4% dip in revenues over last year due to weak demand and falling flash prices in the mobility and embedded applications. Client Solutions revenue was down nearly 25% due to softening demand and pricing pressure on flash and HDD products. Reduced cloud spending from its clients resulted in Data Center Devices and Solutions revenue decreasing by 25% in the second quarter.

Demand for flash-based products has been plateauing due to the emergence of new technologies, increased supply resulting in higher inventories for companies like Western Digital. Adding fuel to the fire, the trade war between the US and China has made things worse with the steady fall of NAND flash prices. This has forced Western Digital to scale back flash production for 2019 by 10% to 15% in Flash Ventures. This would help the firm to recalibrate production in line with market demand which would result in lower inventories.

Flash Ventures is a joint venture (JV) with Toshiba Memory Corporation (TMC) to produce flash-based products through the Yokkaichi (Japan) facility. It’s mandatory for Western Digital to pay 50% of fixed costs incurred by the JV regardless of whether the company buys flash-related offerings from Flash Ventures. The company expects to record $250 million to $300 million as charges relating to reduced production from Flash Ventures.

Last quarter, 48% of the top line contribution came from its top 10 customers and the top two alone contributed 11% to revenues. It’s important for the company to reduce its dependency on revenues from the top 10 clients and needs to broaden its customer base.

Apart from Western Digital, chipmaker Intel also reported its Q4 earnings. Intel Corporation (INTC) reported mixed results in the quarter with EPS coming in at $1.28 on revenue of $18.7 billion. Analysts expected the company to post earnings of $1.22 per share on revenue of $19.01 billion. The company’s stock was down about 7% after the bell.

Western Digital’s stock price plummeted more than 50% over the last 12 months due to multiple headwinds faced by the firm has worried investors. The stock price hit a new 52-week low level in December touching $33.83 levels. It has recovered about 9% in 2019 and is trading at $39 range during the extended hours of trading.