Comparable-store sales increased consistently over the past several years, both in the U.S. and international markets

When the COVID-related movement restrictions forced Americans to stay indoors, restaurants having effective home delivery services managed to beat the crisis. Sales of Domino’s Ptizza, Inc. (NYSE: DPZ), which has an efficient delivery system, increased during the pandemic rather than slowing down.

After dipping to a one-year low in March, shares of the Ann Arbor-based pizza giant changed course and rose to a record high this month, riding the positive market sentiment that followed its stronger-than-expected first-quarter results. The company had entered fiscal 2021 on a rather low note, with the stock extending the downturn triggered by the relatively unimpressive financial performance in the second half of last year due to mandatory store closures.

Going by analysts’ conservative target price, the stock seems to have peaked but the valuation is just right. It looks like the management’s bullish outlook has already been factored into the price. It makes sense to buy Domino’s because a company of its stature – with strong fundamentals and a history of value creation – is unlikely to disappoint investors. Recently, DPZ got a big boost after billionaire investor Bill Ackman raised his stake in the company to 6%, after divesting his holding in Starbucks (NASDAQ: SUBX).

Domino’s owes its pandemic resilience mainly to constant innovation, especially investments in new technology that helps it track orders effectively and allows customers to access the brand with ease through multiple channels. The management’s efforts in that direction have transformed the company from a store-based fast-food chain into a full-fledged online food delivery platform. Interestingly, comparable store sales increased consistently over the past several years, both in the U.S and international markets. 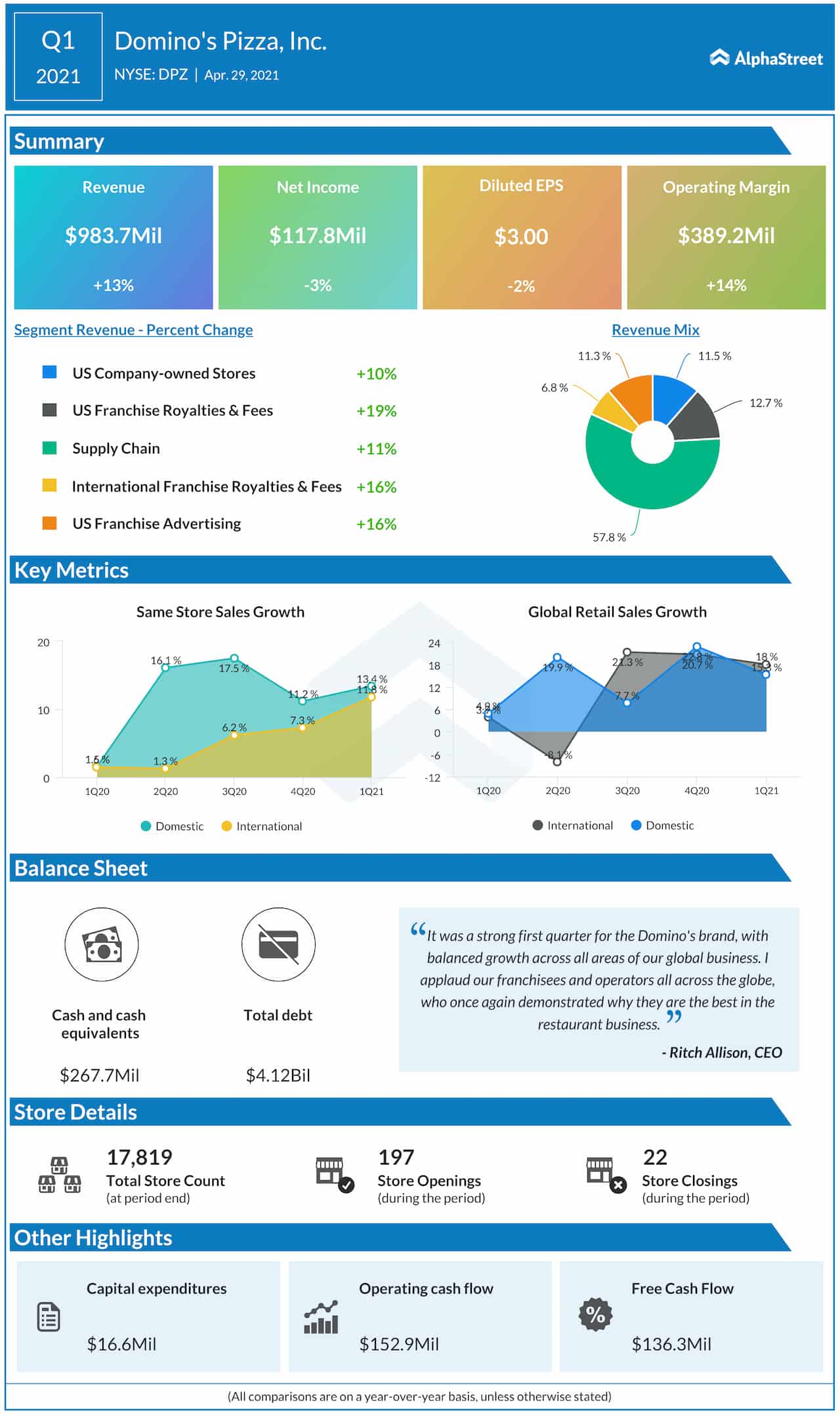 “While our carry-out order count remained pressured in Q1 as it was throughout the last year, we continue to grow awareness of Domino’s car-side delivery. This has created a new option to serve our customers effectively during Covid and will remain an important part of our strategy as we continue to evolve the carry-out experience; not only to enhance the loyalty of our current carry-out customers, but also to reach a new, different, and largely untapped drive-through oriented customer, going forward.”

Though the pandemic has changed the way restaurants operate to a large extent, Domino’s has the potential to remain the most favored pizza network post-crisis, aided by less competition and growing online traffic as customers stay away from dine-in restaurants. In the first quarter, sales grew in double digits across all business categories, lifting revenues to $984 million, which is up 13%. Earnings, meanwhile, dropped 2% to $3.00 per share but topped expectations.

Domino’s stock traded higher on Thursday afternoon, but slightly below its recent peak. Touted as one of the best-performing stocks ever, DPZ grew 8% in the past six months, mostly outperforming competitors and the broad market.