"As we transition towards a more technology-driven business model, the quality of revenue will improve, and operating margin should gradually expand along the way."

360 DigiTech, Inc. (NASDAQ: QFIN) ended the first half of fiscal 2021 on an upbeat note, delivering record-breaking operating results even as its transition towards a more technology-driven business model picked up pace. In a move aimed at deploying cash effectively and increasing shareholder value, the online consumer finance platform recently launched a share buyback program.

Loan origination volumes grew at an accelerated pace in the most recent quarter, indicating the company is on track to emerge as one of the premium financial technology platforms. Recent stress tests point to continued healthy volume growth into 2022, despite the restrictive regulatory guidelines.

In an interview with AlphaStreet, 360 DigiTech’s chief financial officer Alex Xu said the new interest-rate cap of 24% could have a positive effect on the business as lower prices would help in developing partnerships with larger national banks that typically offer more stable funding at lower costs. It will also enable the company to increase the issuance of ABS, which carries lower funding costs. According to Xu, lower prices normally boost borrower activity and retention rates.

“We believe more prime customers and better-quality financial institutions would come along with lower-price products. This will ultimately enhance our operational efficiency and make our business more resilient and sustainable. Such changes may set up a solid base for us to accelerate growth after 2022. We feel quite optimistic,” said Xu.

The management’s efforts to ramp up Platform Services, as part of its multi-year upgrading strategy, have yielded the desired results in the first half when the business division registered double-digit growth. In the June quarter, the capital-light model accounted for around 56% of total loan facilitation volumes. The momentum further increased in July and capital-light reached the full-year goal of the tech upgrading strategy.

“Capital-light Services requires robust risk management capability and the result has shown our financial partners’ faith and confidence in us. As we transition towards a more technology-driven business model, the quality of the revenue will improve, and operating margin should gradually expand along the way.” 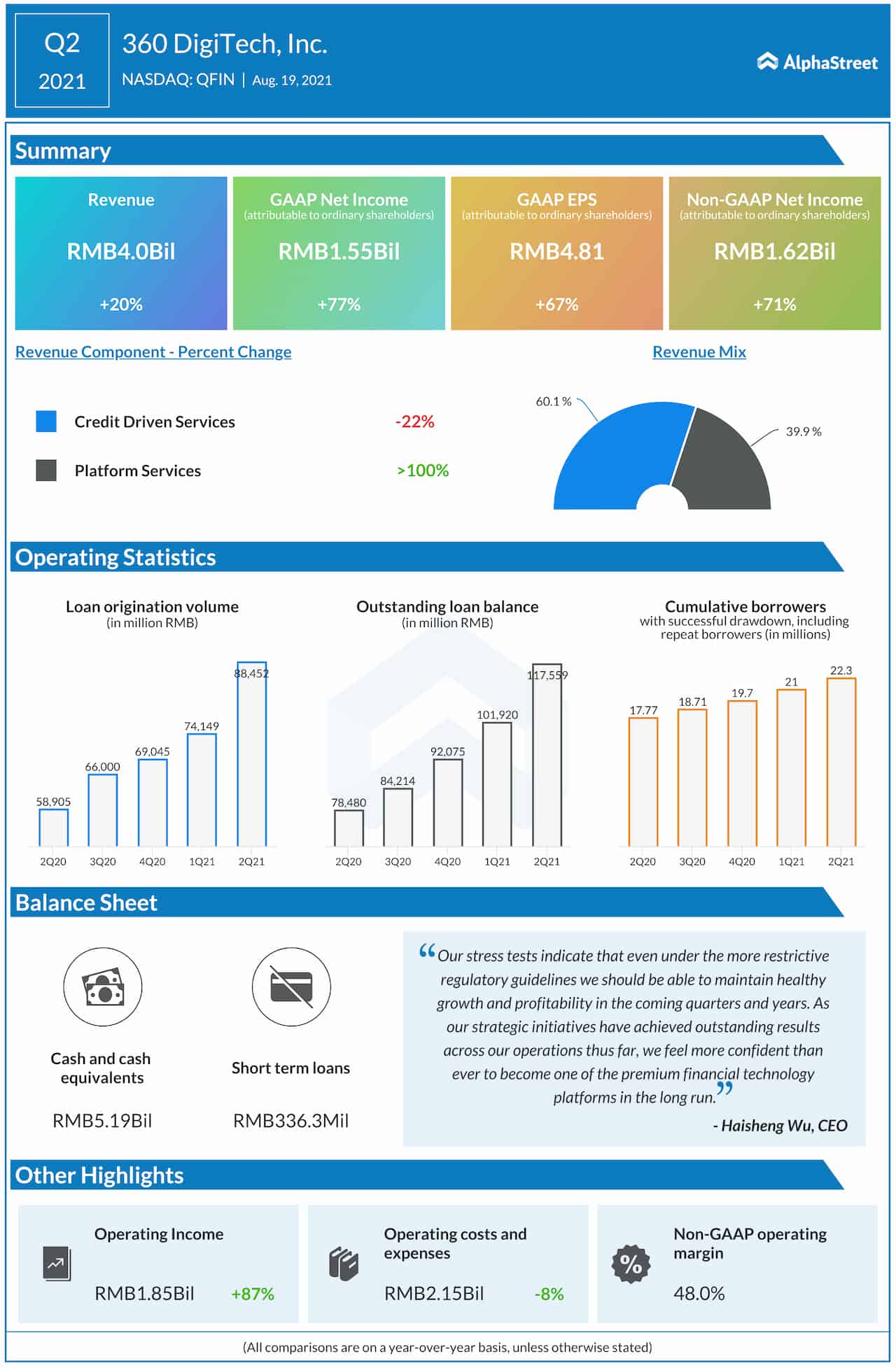 “In July, we launched tobacco business loan, and have served more than 700 offline tobacco business owners. In the second half of the year, we plan to launch other industry-specific loan products targeting cross-border e-commerce, supply chain finance, as well as agriculture and forestry sectors,” added the CFO.

At the end of June, 360 DigiTech had a total of 22.3 million borrowers, which is up 25% from the year-ago period. In the second quarter, loan origination volumes jumped 50% to RMB88.5 billion. Platform Services revenue more than doubled to RMB1.6 billion, offsetting a 22% decrease in Credit Driven Services. At RMB4.0 billion, total revenues were up 20% year-over-year. Adjusted net income rose 71% to RMB1.62 billion. The company ended the first half with a healthy cash balance of RMB5.2 billion.

Shares of 360 DigiTech traded up 15% in the early hours of Tuesday, after making steady gains since the beginning of the week. They have grown 76% so far this year and mostly stayed above the long-term average.