Activision Blizzard swings to profit in Q4, but misses estimates

Activision Blizzard (ATVI) swung to a profit in the fourth quarter from a loss last year, helped by lower costs and expenses as well as a decline in income tax expense. However, the results missed analysts’ expectations and the company guided full-year earnings way below the consensus estimates.

Net revenue jumped 16.5% to $2.38 billion. Revenues from digital channels were $1.79 billion. The company posted net bookings of $2.84 billion for the quarter, higher by 7.6% compared to last year.

The number of developers working on Call of Duty, Candy Crush, Overwatch, Warcraft, Hearthstone and Diablo in aggregate will increase by about 20% over the course of 2019. The company is also integrating its global and regional sales and go-to-market, partnerships, and sponsorships capabilities. As part of these restructuring actions, the company expects to incur a GAAP-only pre-tax charge of about $150 million, the majority of which is expected to be incurred this year.

Blizzard had 35 million MAUs in the quarter, as Overwatch and Hearthstone saw sequential stability and World of Warcraft saw expected declines post-expansion-launch. Fourth quarter segment revenues grew 15% year-over-year to $686 million. Building on an 11-year partnership, Blizzard extended its joint venture with NetEase to publish its games in China through January 2023. 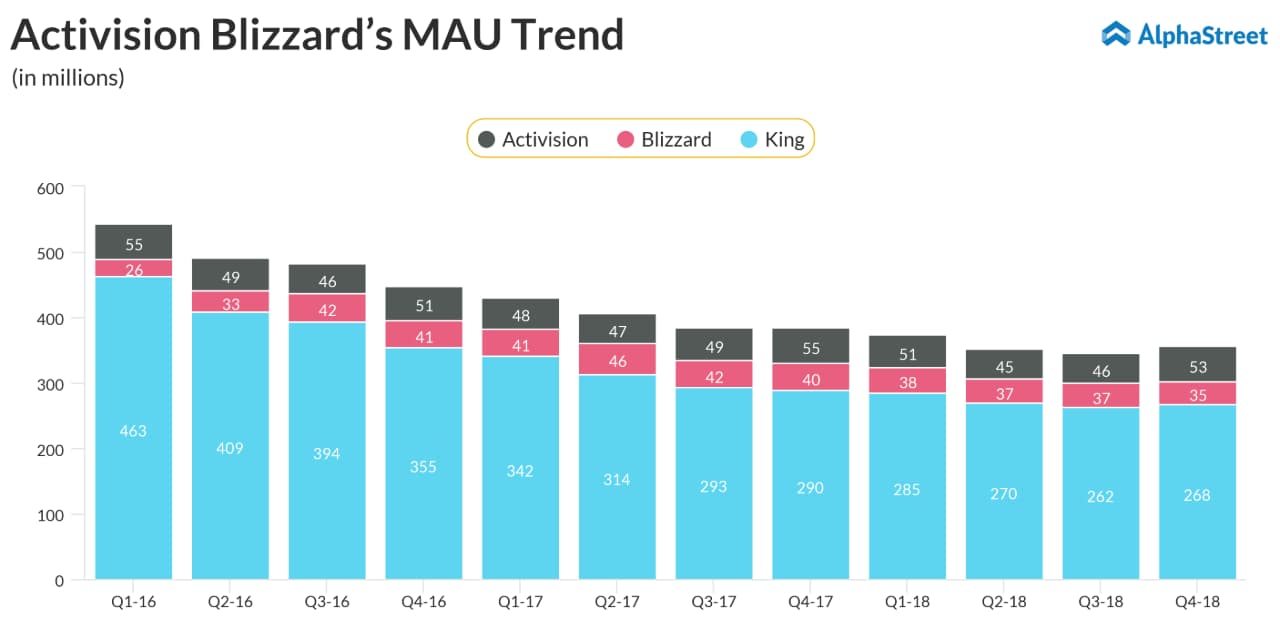 The board of directors declared a cash dividend of $0.37 per common share, payable on May 9, 2019, to shareholders of record on March 28, 2019, which represents a 9% increase from 2018. Additionally, the board authorized a new two-year stock repurchase program under which the company is authorized to repurchase up to $1.5 billion of its outstanding common stock during the period.

Shares of Activision ended Tuesday’s regular session up 3.89% at $41.67 on the Nasdaq. The stock has fallen over 39% in the past year and over 22% in the past three months.