In the whole of 2021, semiconductor equipment revenues jumped 43% annually to around $5 billion, outpacing the market growth rate

For semiconductor equipment companies and chipmakers, the first priority currently is to tackle the chip shortage caused by the supply and demand mismatch in the logistics network. It is estimated that investments in semiconductor fab would be an all-time high of around $100 billion in 2022. Applied Materials (NASDAQ: AMAT), a leading supplier of semiconductor manufacturing equipment, ended fiscal 2021 on a mixed note, reporting weaker-than-expected earnings for the fourth quarter after beating estimates in the trailing five quarters.

The Santa Clara-based tech firm disappointed the market last week with its rather unimpressive quarterly results. The stock pulled back from the recent peak following the earnings announcement and entered a volatile phase.

But the downturn is unlikely to continue as AMAT has the potential to bounce back quickly, being part of a fast-growing industry. The company has been around for many decades and its fundamentals are quite strong. Going by analysts’ bullish view, it is doubtful if there was a better time to buy the stock. The current target price points to a 14% growth in the next twelve months, a trend that should continue in the long term. 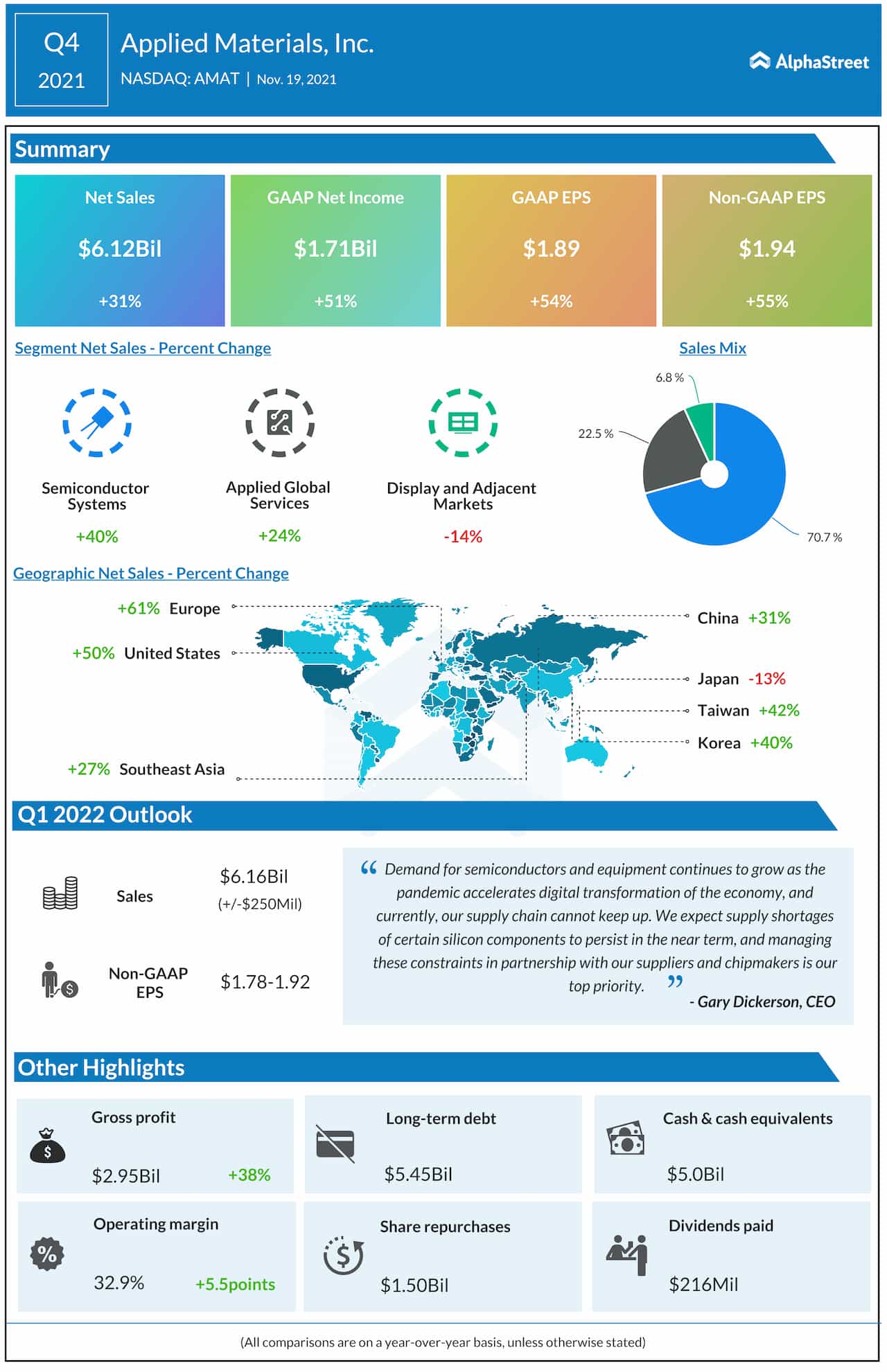 In the final three months of fiscal 2021, earnings missed estimates after beating Wall Street’s forecast consistently over the past several quarters. Fourth-quarter profit, adjusted for special items, rose sharply to $1.94 per share. At $6.12 billion, revenues were up 31% year-over-year, mainly reflecting a 40% growth in the core semiconductor systems revenue.

“For Applied, our issues are relatively narrow, and we are proactively collaborating with our suppliers and directly with the chip companies to find solutions and work around bottlenecks. I deeply appreciate their partnership and teamwork as we navigate these unprecedented circumstances together. Looking further ahead, I believe we will see permanent changes in the way supply chains are designed and operated,” said Gary Dickerson, chief executive officer of Applied Materials, during his post-earnings interaction with analysts.

It seems the company is set to begin the new fiscal year on a bright note, thanks to its massive order backlog. Enterprise spending on semiconductor equipment and materials remains elevated, continuing the pandemic-era boom. The management’s long-term growth strategy underscores the encouraging market conditions.

Where is Nvidia headed after reaching $800-billion valuation?

After withdrawing from a record high, Applied Materials’ stock lost about 5% in recent weeks but stayed above its 52-week average. The value has more than doubled in the past twelve months, making AMAT one of the best-performing stocks during that period. It made modest gainst in the pre-market session on Tuesday, after closing the previous session at $150.03.