Google Cloud and YouTube continue to grow, aided by the fast-paced digital transformation and steady growth in the consumption of online content

Online search activity increased sharply during the shutdown as the internet became a one-stop destination for the various needs of people confined to their homes due to the movement restrictions. Alphabet, Inc. (NASDAQ: GOOG, GOOGL), the company that owns Google, is thriving on the digital transformation spree and spike in the consumption of online content.

Alphabet’s operating margin increased consistently in recent quarters, thanks to the booming search business and shift of advertisements from traditional mediums to cyberspace. The company’s impressive financial performance and strong cash flows would help it execute growth plans effectively, including expansion of the cloud business and the Waymo self-driving car project under Other Bets.

This week, strong third-quarter results triggered a rally and the stock reached a new high. While the outcome has made GOOGL more attractive, some investors might find it unaffordable. Despite the rally, there seems to be more room for growth, and market watchers see a double-digit gain in the 12-month period. Google is one of the safest Wall Street stocks that has found favor with almost all analysts. Currently, the company is close to hitting a $2-trillion valuation.

For the Mountain View-based tech conglomerate, the core search business has been the main growth driver but Google Cloud and video distribution platform YouTube — the other high-growth divisions — have been contributing significantly to the business lately. The good news is that the evolution of the digital ecosystem is durable and Alphabet looks well-positioned to leverage it, even beyond the COVID era. 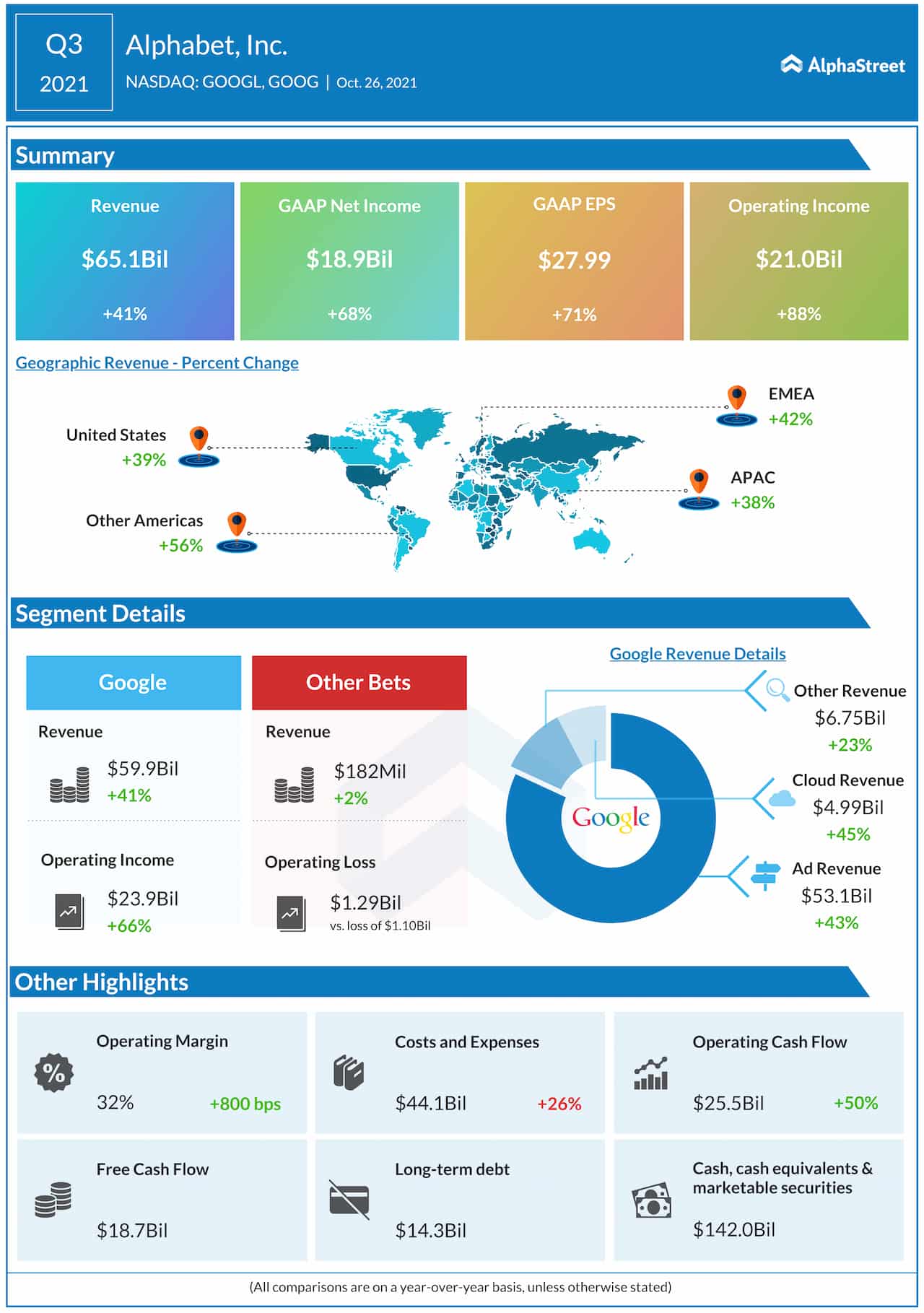 “We’ve seen explosive growth in digital over the last 20-some months. But as the world begins to reopen, shoppers are returning to stores. Brick-and-mortar isn’t dead. Instead, omnichannel is in full force. Searches for open now near me are up 4 times globally versus last year. Strong growth in local shopping queries means people are researching their visits to stores more often before they go. As a result, we’ve seen more advertisers include in-store sales alongside e-commerce goals to drive omnichannel growth. Adoption has nearly doubled over the past year.”

In the third quarter, operating margins climbed to 39.2%, which is well above the pre-COVID levels. The search business grew a whopping 44% and generated around $38 billion in revenues. Google Cloud and YouTube expanded almost at the same pace. Total revenues jumped to $65.1 billion, which translated into a 71% growth in earnings to a record high of $27.99 per share. The numbers also topped expectations by wide margins, as they did in each of the trailing five quarters.

Facebook has what it takes to sail through tough times. Here’s why

Meanwhile, regulatory changes and new privacy policies, such as the restrictions imposed by Apple Inc. (NASDAQ: AAPL) recently, can affect the online advertising landscape and Alphabet is not immune to it. For instance, Snap, Inc. (NYSE: SNAP) was hit by a major stock selloff after the photo-sharing app reported not-so-impressive financial results and issued weak guidance recently to reflect the impact of the iOS changes on its ad business.

Alphabet’s shares breached the $2,900-mark this week after the earnings announcement, but lost some momentum and traded lower in the early hours of Thursday. In the past six months alone, they gained around 22%.