Semiconductor firm Analog Devices (ADI) has always been an investors’ favorite for its relatively stable market cap and strong fundamentals. Having outperformed the industry in the past twelve months, amid aggressive product innovation and operational improvement, the stock reached a new peak this year.

It is widely expected that the company, a pioneer in digital signal processing technology, will report adjusted earnings of $1.28 per share for the first quarter of 2019 on revenues of $1.51 billion, which represents a marked decline from the year-ago period. The results, scheduled to be published Wednesday before the opening bell, could be impacted by the continuing slump in the company’s consumer business.

The other potential headwinds are the ongoing US-China trade dispute and volatilities in the global economy. These negative factors are likely to be offset by the sustained demand for products in the industrial and communication end-markets. Also, an earnings beat cannot be ruled out this time, considering the positive trend seen last year when the bottom line topped estimates in all the four quarters.

The results, to be published Wednesday before the opening bell, could be impacted by the continuing slump in the consumer business

While analysts are buoyant about the prospects of the company’s core business segments, there is concern about the deepening weakness in the demand for products used in portable consumer applications, which has seen the division registering negative growth in recent quarters. 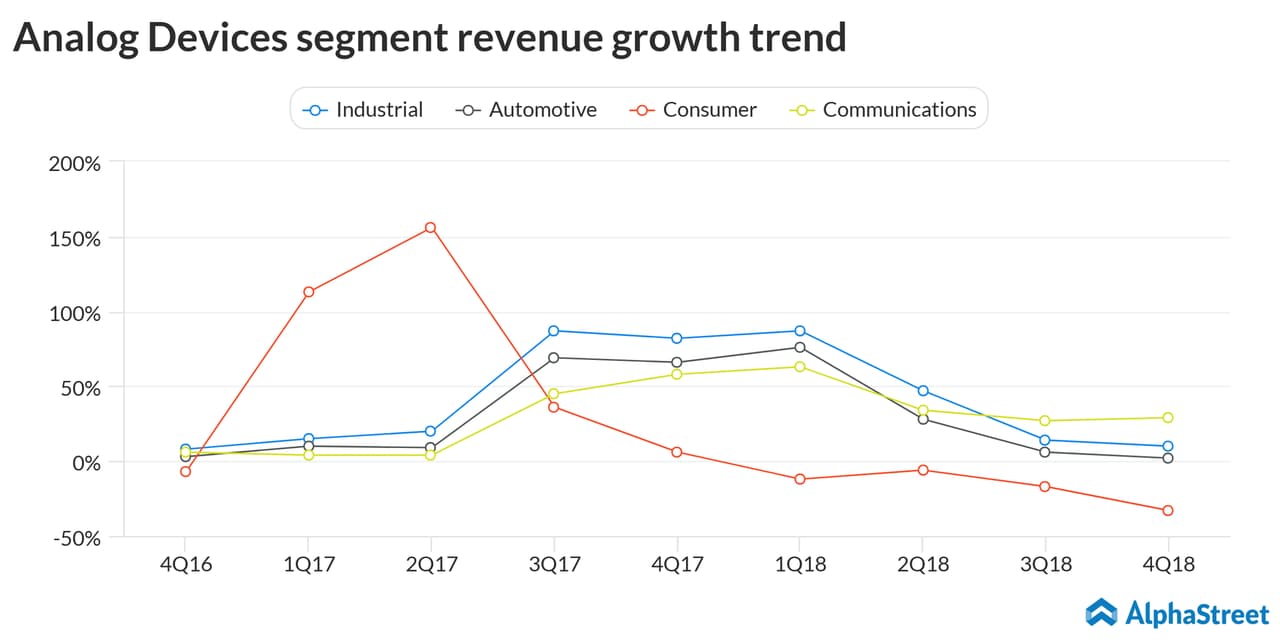 In the fourth quarter, total revenues moved up about 4% annually to $1.6 billion on the back of a double-digit increase in the industrial and communications segments, which more than offset the softness in the consumer division. Consequently, earnings surged 24% to $1.15 per share. Demand has been particularly strong in the B2B market.

Last week, Bank of America Merrill Lynch upgraded the stock to buy from neutral and lifted the price target to $125, citing the rapid adoption of 5G across industries. Considering the positive outlook for Analog Devices’ performance beyond the first quarter – with market watchers predicting steady growth this year- shares of the company might move higher and generate decent returns for investors in the long term.

The stock gained 17% in the past twelve months and hit a record high recently. The shares, which slipped to a one-year low mid-2018 and recovered after the fourth-quarter earnings report, rose about 30% since the beginning of the current year.