AngioDynamics has been transforming into an advanced med-tech platform, an emerging healthcare segment supported by information technology

The performance of AngioDynamics, Inc. (NASDAQ: ANGO) has not been very impressive lately, despite being part of a rapidly growing industry. But the company’s efforts to bring innovation to the business, giving priority to the expansion of its growth-oriented segments, are creating new opportunities for the medical device maker

Shares of the Latham-headquartered firm, which produces and sells medical and diagnostic equipment with a focus on vascular and oncology medicine, had made a steady recovery after slipping to record lows about two years ago. But it lost momentum in the final months of last year when the market went into a tailspin. After making a positive start to 2022, ANGO mostly traded below its 52-week average. But the weakness looks temporary – with the COVID situation improving, market conditions are becoming favorable for the company and that would have a positive effect on investor sentiment.

However, the company’s inability to stay profitable consistently would be a concern for the management and other stakeholders. Though the bottom-line performance was mediocre in recent years – often slipping into the negative territory — the numbers mostly exceeded the consensus forecast. Also, sales have not been materially affected by unfavorable market conditions and that should be a morale booster for shareholders.

In the latest quarter, for which the company published results recently, earnings moved up year-over-year to $0.03 per share. A double-digit increase in the core Endovascular Therapies segment more than offset weakness in the other divisions. Consequently, net sales increased 4% from last year to $74 million. 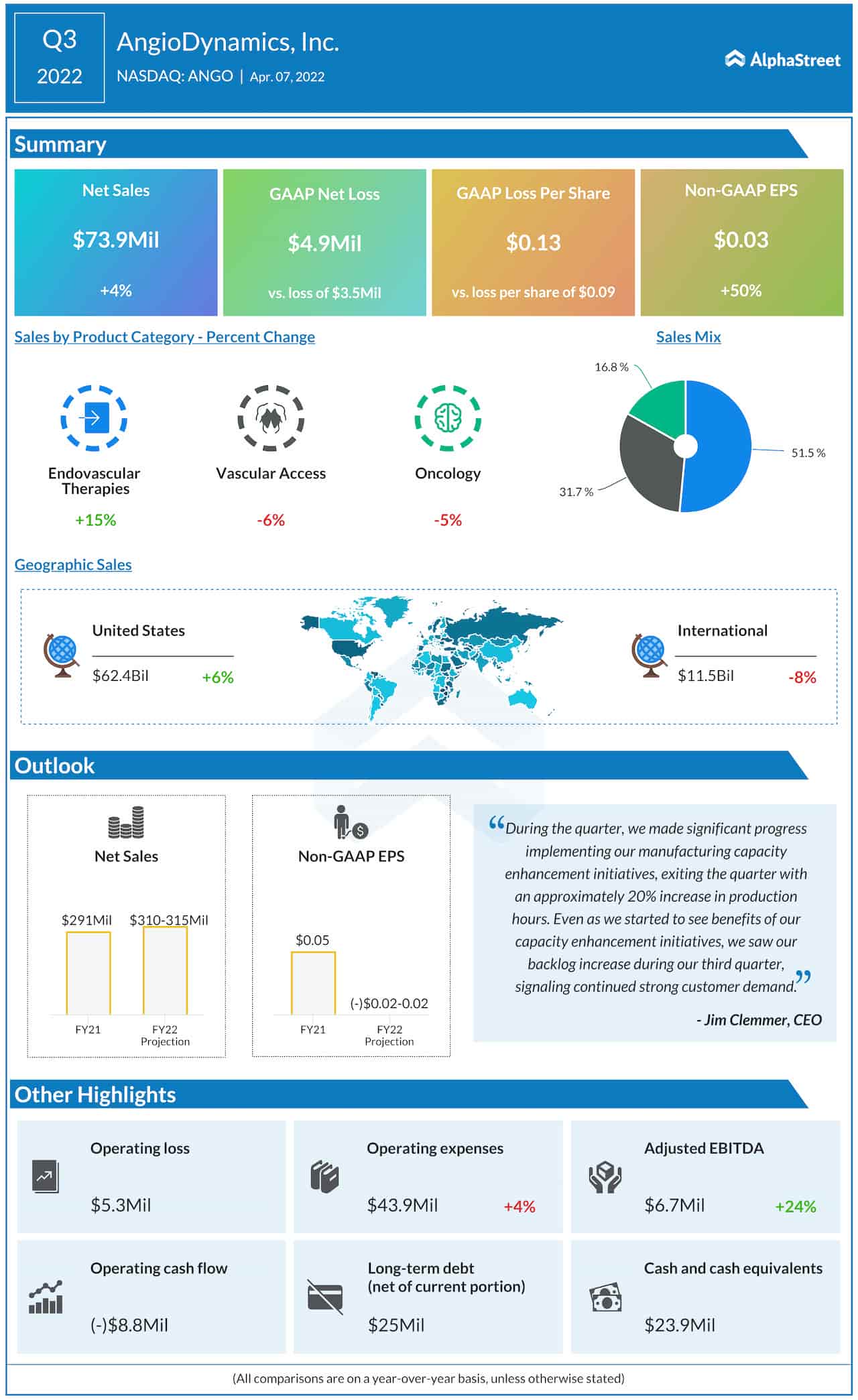 “…we’re pleased with the progress we’ve made towards our strategic transformation. We continue to balance our priorities of achieving top-line growth in the near term with investments that will create sustainable profitable growth over the long term. I’m proud of our team’s ability to continue working towards these goals, despite a very challenging operating environment,” said AngioDynamics’ CFO Stephen Trowbridge during a recent interaction with analysts.

The management has embarked on a capacity enhancement program to deal with growing customer demand, and the latest data show that the initiatives have started yielding results. But the related investments would lessen the company’s ability to create shareholder value, dampening its prospects as a short-term investment.

AngioDynamics is transforming into an advanced med-tech platform, which is an emerging healthcare segment supported by information technology and having a wider scope compared to the medical devices business. The shift puts the company in an advantageous position compared to its mightier rivals like Medtronic plc (NYSE: MDT) and Intuitive Surgical, Inc. (NASDAQ: ISRG). That would allow the company to leverage the ongoing digital transformation, while its promising growth prospects make the stock an attractive bet for the long term.

However, the updated outlook shows that AngioDynamics’ executives are not very optimistic about the company’s full-year earnings performance. The forecast for break-even bottom-line, at the mid-point of the range, has dampened the recovery hopes to some extent.

After going through a series of ups and downs since the beginning of the year, AngioDynamics’ stock closed the last trading session slightly below $20.