The market has been closely tracking the performance of financial institutions after a tough start to the year, marked by a slowdown in economic activity due to challenging market conditions. Leading U.S banks have reported earnings, and a common concern raised by CEOs in their post-earnings discussions is the persistent uncertainties and their long-term impact on business.

The economic impact of the ongoing geopolitical issues and elevated inflation could be a drag on business in the foreseeable future, though banks expect to benefit from the Federal Reserve’s planned rate hikes. Besides the recessionary pressure, banks would also have to deal with reduced M&A activity, IPO slowdown, and volatility in the equity market. These factors are prompting managements to prepare for bigger risks in the future, which is reflected in their loan loss provisions.

For the near term, however, economic sentiment looks optimistic from the perspective of financial institutions, thanks to rising consumer confidence amid continuing labor market recovery and improvement in the pandemic situation. While Citigroup Inc. (NYSE: C) and Bank of America Corporation (NYSE: BAC) reported stronger-than-expected top and bottom-line results, the performance of JPMorgan Chase & Co. (NYSE: JPM) and Wells Fargo & Company (NYSE: WFC) was mixed in relation to consensus estimates.

With its main business segments registering negative growth, Citigroup posted a 2% decrease in first-quarter revenue to about $19 billion. The banking giant’s net profit plunged 44% to $2.02 per share, mainly hurt by a sharp increase in operating expenses. However, it was much better than the outcome experts had predicted. Citi shares closed Monday’s regular session up 3%, after losing about 26% since last year. 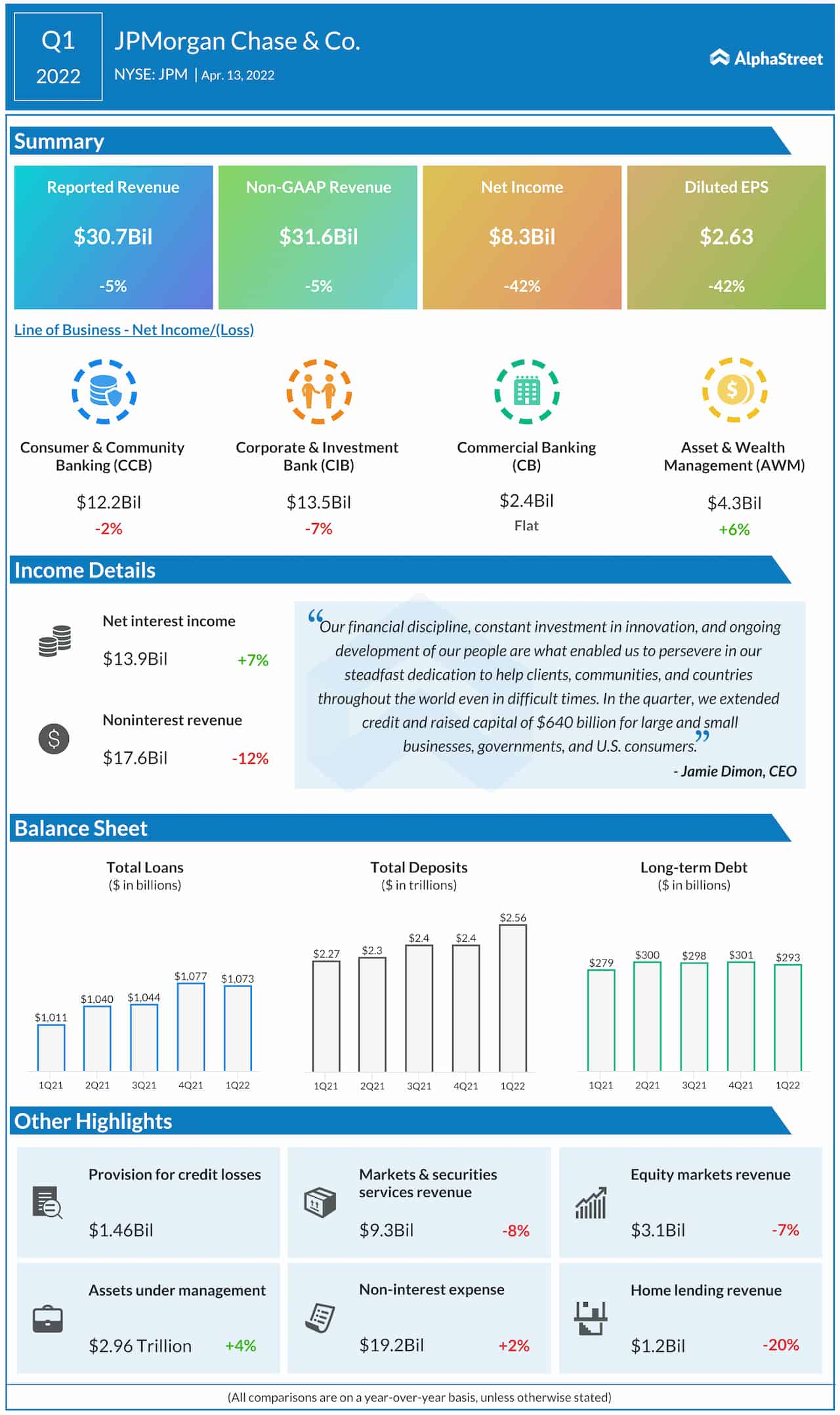 Bank of America, the latest among the US banks to announce earnings this season, reported revenue growth for the main operating segments. That was partially offset by weakness in the Global Markets division, restricting the top-line growth to just 2% in the first quarter. Meanwhile, earnings declined 7% from last year to $0.80 per share. Both numbers topped expectations. Post-earnings, the stock made strong gains early Monday and traded close to the levels seen 12 months ago.

JPMorgan has been affected by the sanctions imposed on Russia and the resultant market dislocation. The banking giant’s revenues dropped 5% year-over-year to $31 billion in the most recent quarter but the number beat the consensus estimates. Consequently, earnings declined 42% to $2.63 per share, representing a bigger impact than analysts had projected. During the quarter, JPMorgan took a $902 billion charge for building reserves for anticipated loan losses, in view of the downside risk to the economy. Though JPM maintained an uptrend throughout 2021, it was hit by the recent market selloff and entered a rough patch this year. The stock closed the last session higher.

For Wells Fargo, a 12% growth in its relatively smaller commercial banking division was not enough to offset a seemingly modest decline in the core consumer business. At $17.5 billion, first-quarter revenues were down 5%, which translated into a 14% fall in earnings to $0.88 per share.  WFC had slipped to a six-month low in March but made a steady recovery since then.