In the second quarter of 2023, revenues and earnings fell short of expectations amid continued slowdown in demand

The automotive sector is one of the worst affected by the combination of high inflation and rising interest rates. Consumers have become more cautious and are prioritizing their purchases with focus on non-discretionary items, in response to the strain on spending power. For CarMax, Inc. (NYSE: KMX), 2022 has been a challenging year so far, marked by lackluster sales and falling profit.

Last week, the Richmond-based used car dealer’s stock dropped to the lowest level in more than two years as investor sentiment was hurt by its weaker-than-expected second-quarter results and the management’s cautious guidance. The stock has been on a downward spiral for nearly a year now, with the market selloff accelerating the decline.

As far as prospective buyers are concerned, the stock has become cheap and attractive. But the unfavorable pricing environment and continuing pressure on sales and profit, which are unlikely to meet the market’s estimates in the coming quarters, call for caution. So, it is worth waiting until demand conditions improve, before investing in KMX.

The company has successfully overcome similar challenges in the past, and the management is optimistic about its long-term prospects. Going forward, the focus will be on providing a better omnichannel experience to customers and associates by ramping up both online and in-store offerings, leveraging the diversified business model.

Interestingly, there were many ups and downs in CarMax’s business in recent years –- after experiencing a slump in the early months of the pandemic, business boomed as people developed a penchant for owning used vehicles instead of new ones. The trend reversed early this year when the business was hit by macroeconomic challenges. 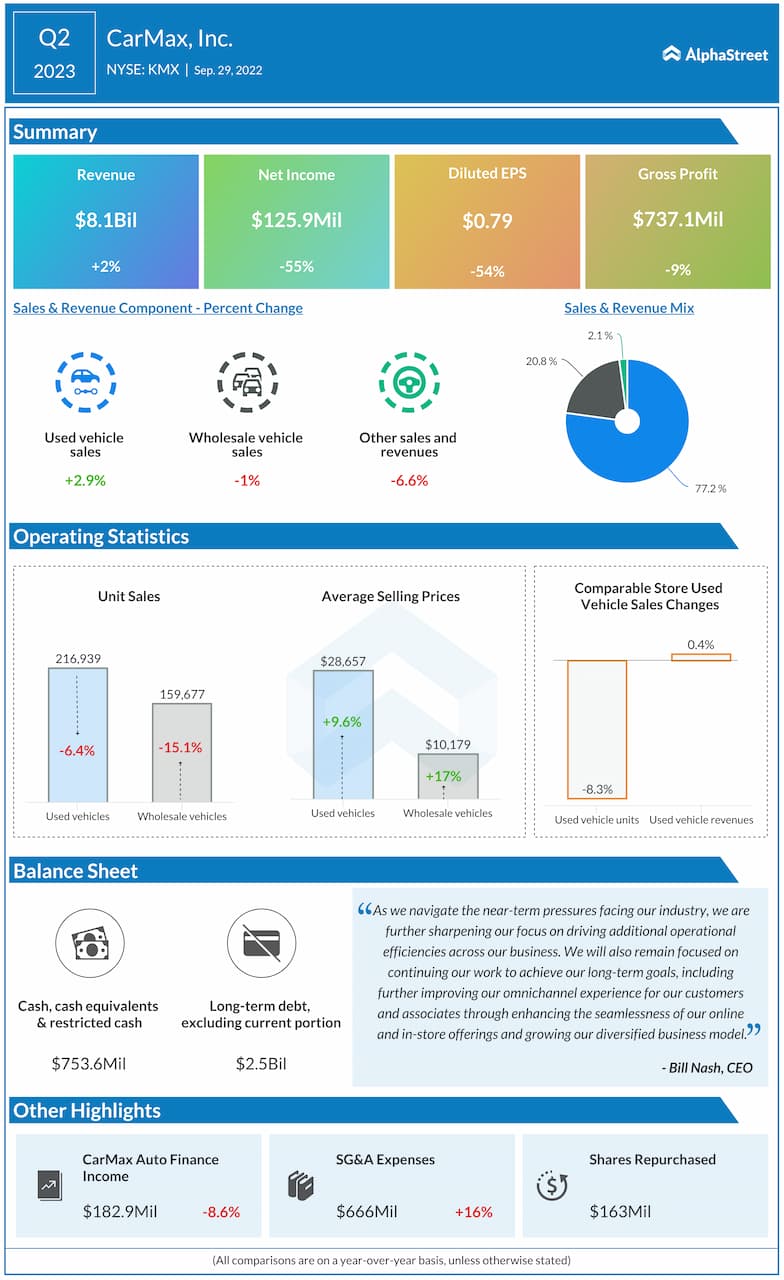 The weakness is likely to continue in the coming months as the Federal Reserve maintains its hawkish policy and raises interest rates to tame inflation, thereby denting consumer confidence further.

Reflecting the deepening inflation pressure and interest rate hikes, CarMax’s unit sales are trending below the prior-year levels even as average selling prices increase. Weakness in vehicle sales is a normal thing during economic downturns and demand should bounce back once market conditions improve. CarMax’s financial position is strong enough to recover from the temporary setback.

In the second quarter, higher sales in the used car segment more than offset declines in the other divisions, resulting in a 2% increase in revenues to $8.1 billion. Comparable-store used vehicle sales, on a unit basis, dropped 8.3%, while earnings per share decreased 54% year-over-year to $0.79. Both numbers missed estimates.

“Our performance was impacted by the macro factors that I mentioned previously. We believe industry sales were also impacted by a shift in consumer spending prioritization from large purchases to smaller discretionary items. In response to the current environment and consumer demand, we have continued to offer a higher mix of lower-priced vehicles. We began the second quarter with a low single-digit decline in comp sales during June that reflected a continuation of softer although improving sales, which we discussed on our last earnings call.”

Stock Watch: Why General Motors is a good buy after earnings

Shares of CarMax lost about 43% so far this year. They made a modest recovery from the post-earnings downturn this week and traded higher on Tuesday afternoon.