Electronic Arts, the maker of hit video-game titles such as Madden and FIFA, is set to announce its third-quarter 2019 earnings after the closing bell on Tuesday, Feb. 5.

Analysts estimate earnings of $1.93 per share on revenue of $1.76 billion.

With a huge shift toward digital versions of video games, EA looks to derive most of its business from the digital segment.

Soccer title FIFA is a major growth driver for EA, with the franchise selling more than 260 million copies worldwide to date.

This was also the quarter when EA launched Command & Conquer: Rivals for mobile players, marking its entry into mobile e-sports. It also launched The Sims 4 Get Famous in the third quarter.

THE LOSS IN BATTLE

However, EA’s biggest loss in the quarter was the unexpected delay in its highly-anticipated title Battlefield V.

This lead to the game losing holiday business to Activision (ATVI) for its Call of Duty: Black Ops 4 and Take Two Interactive (TTWO) for its hit Red Dead Redemption 2.

We’ll see how the lackluster sales of Battlefield V affected when EA reports on Tuesday.

LOOKING BACK AT THE SECOND QUARTER

EA beat both earnings and revenue estimates, but the outlook pushed the stock down following the results announcement. 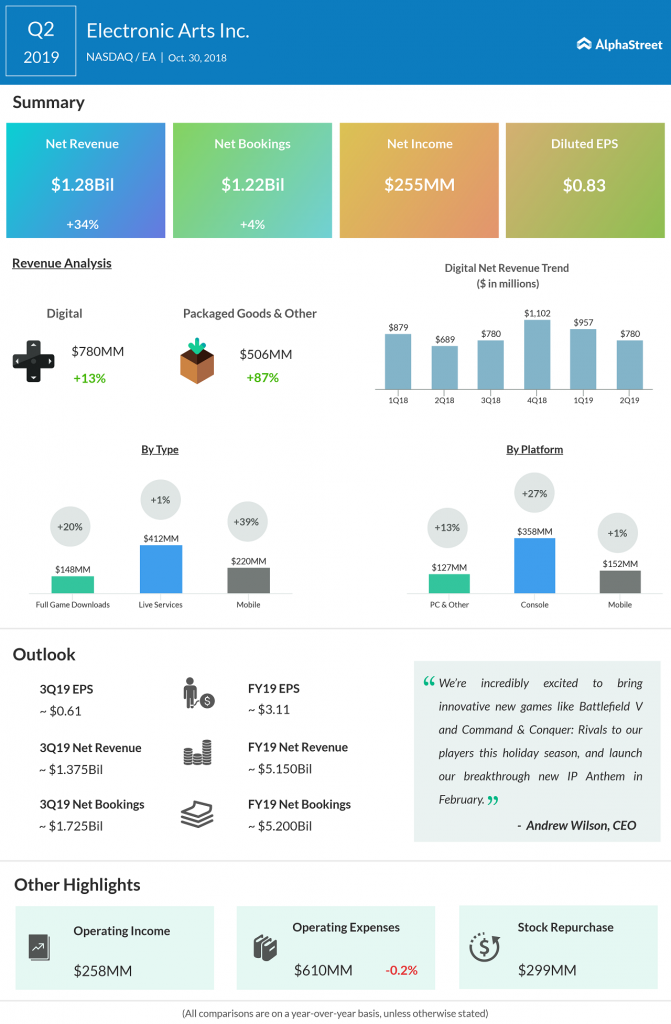 For fiscal 2019, EA in October said that it expects net revenue to be about $5.15 billion on net bookings of $5.2 billion. Mobile platform fees is touted to hit $220 million, while net income is expected to be $962 million or $3.11 per diluted share for the year, on an operating cash flow of about $1.65 billion.

For the third quarter, net revenue is expected to be about $1.375 billion on net bookings of $1.725 billion.