Shares of the oil giant ExxonMobil (XOM) decreased above 2% after the firm missed the street estimates on both top and bottom line. First quarter results were impacted by scheduled maintenance in refining division and continued margin pressure due to increased supply in the chemical segment. 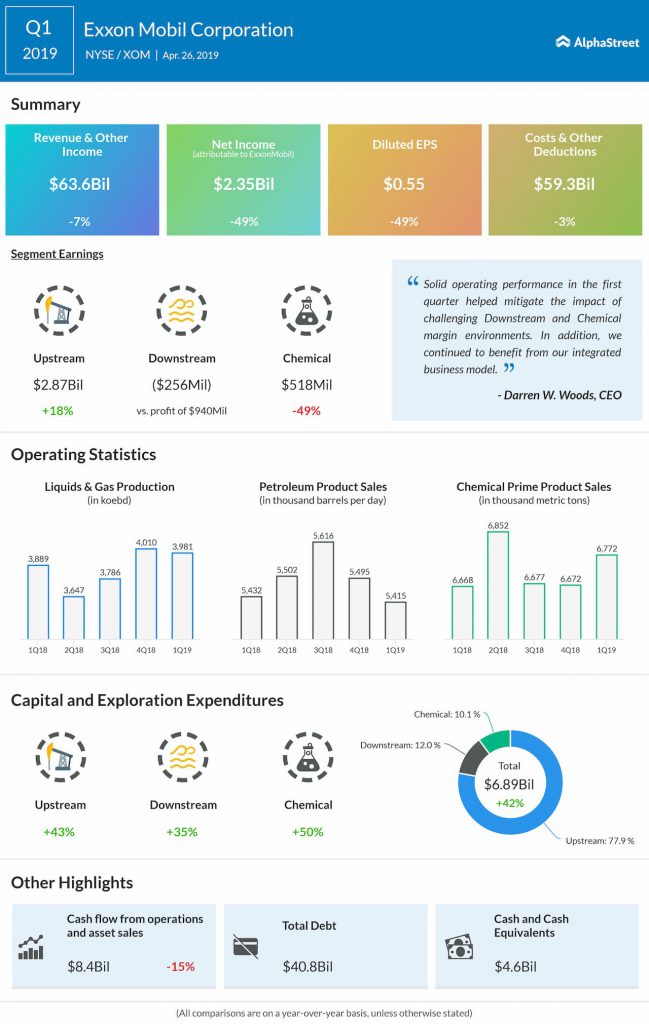 Earnings dwindled 50% to $0.55 per share compared to $1.09 per share last year hurt by poor performance from the downstream and chemical division. Q1 earnings missed analyst estimates by a huge margin of $0.19. The street was expecting EPS to come in at $0.74 share. Exxon reported a 6.7% dip in revenue of $63.6 billion over last year, which failed to meet estimates of $64.26 billion.

Yesterday Exxon announced a quarterly dividend of $0.87 per share for Q2, up 5 cents from last quarter. It’s worth noting that the oil giant has been consistently raised annual dividend payments for 37 years.

Commenting on the Q1 performance CEO Darren Woods stated, “The change in Canadian crude differentials, as well as heavy scheduled maintenance, similar to the fourth quarter of 2018, affected our quarterly results.”

Production increased 2% to 4 million barrels per day continuing the trend from the last quarter. This is a good sign for investors, as the oil giant has been facing decreasing production in the last three years, which has been a big concern for the street.

On the segment earnings front, Upstream profits fell 18% due to a decrease in crude prices and asset impairments. Downstream reported a loss of $256 million due to lower refining margins and continued maintenance. However, the company has noted that it is done with the heavy scheduled maintenance.

The chemical division saw its profit decreased by $493 million due to increased supply surpassing demand, denting margins. It also was impacted by forex headwinds due to weaker Euro and increased expenses due to investments in new assets.

Capex spending jumped 42% to $6.9 billion in line with the company’s strategy to invest in new assets across the board, which also includes investments in the US Permian Basin. Exxon plans to spend $30 billion this year and has already stated it to increase to $35 billion from 2020.

The company is in the process of divesting assets which are bringing in lower profits and plans to ramp up investments in projects across all its three divisions which would improve efficiency and productivity resulting in lower costs and higher profits.

Higher CapEx spending would impact free cash flow in the short-term, however, once the projects resume production, investors can see better top and bottom line numbers which would make it attractive in the long-term. Due to increased CapEx spending, free cash flow stood at $2.5 billion compared to $6.7 billion reported last year.

Exxon expects similar macros to prevail in the second quarter across all segments. Shares of the company have increased 18% this year backed by solid Q4 results.