Q2 earnings preview: FedEx expected to bounce back from the 52-week low

FedEx (FDX) is slated to report its second quarter fiscal 2019 results on Tuesday, December 18th after the bell. Wall Street expects the transporting giant to post earnings of $3.95 per share on revenues of $17.76 billion, representing year-over-year growth of 25% and 9%, respectively.

FedEx reported its first quarter earnings on September 17 in which it fell short of analysts’ earnings estimates while surpassing revenue targets. Adjusted earnings surged by 38% to $3.46 and revenue advanced 12% to $17.1 billion. 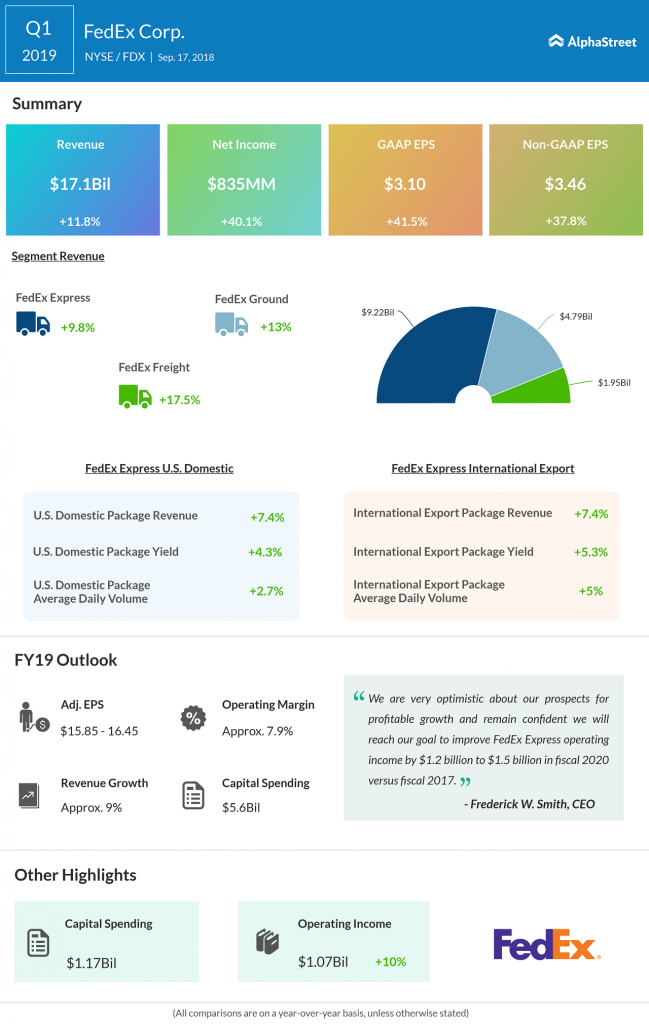 The shipping service provider’s peer United Parcel Service (UPS) reported its recently ended quarter results on October 24. Adjusted EPS of $1.82 came in line with Street’s views, while revenue of $17.4 billion missed the estimates. UPS stock, which had declined 16% in the past one year, hit a new 52-week low ($97.10) during Monday’s morning trading session.

Online giant Amazon’s (AMZN) decision to increase focus on by delivering the goods on its own is seen as a threat for both FedEx and UPS. Amazon Air is expected to affect the volumes handled by both logistics companies. Also, if President Trump increases the tariffs for goods produced in China, it might affect negatively FedEx as it is expected to bring in uncertainty in the US economy.

Last week, Bank of America downgraded The Memphis, Tennessee-based company from Buy to Neutral. However, most of the analysts feel that the stock is undervalued and recommend buying it.

FedEx got increased attention in the Wall Street recently as the stock continued to plunge to its new 52-week lows daily during last week. The pressure continued on Monday’s morning trading session and the shares registered a fresh yearly low ($181.60) in the first hour of trading. As of Friday’s close, FedEx had lost 28% in the last three months and 23% in the past one year.