FedEx continues to bleed even after beating Q2 estimates

FedEx (FDX) reported its second quarter 2019 earnings results. The company beat Street’s views by posting non-GAAP EPS of $4.03 on revenue of $17.8 billion. However, FedEx stock tumbled about 4% as the company lowered its FY19 outlook and its comments on near-term outlook. CFO Alaf Graf said, “Global trade has slowed in recent months and leading indicators point to ongoing deceleration in global trade near-term.” 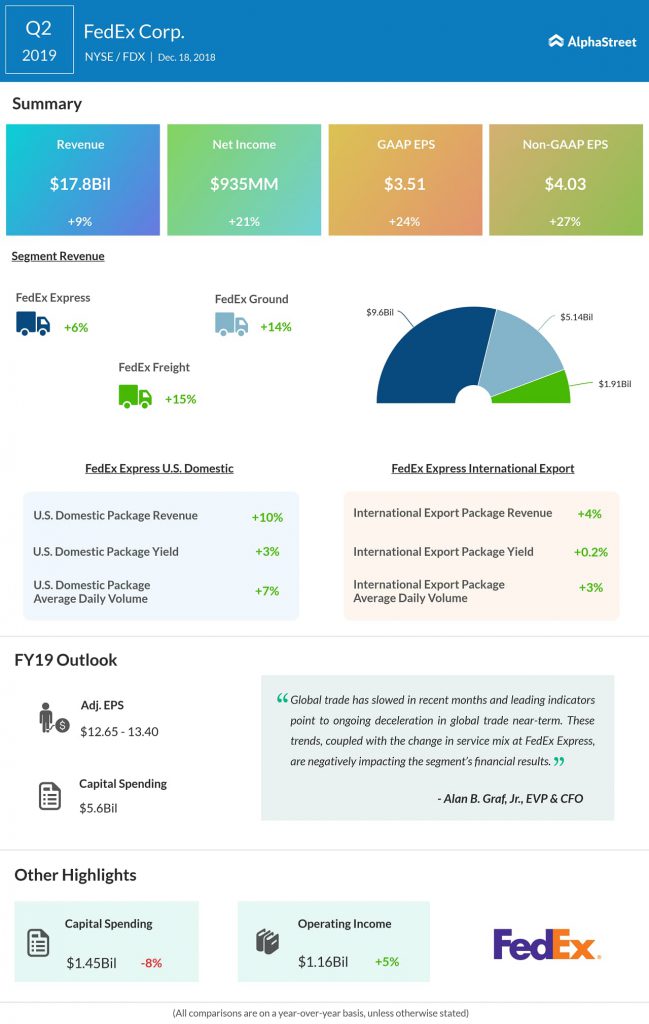 Analysts had expected the logistics giant to post earnings of $3.95 per share on revenues of $17.76 billion. FedEx lowered its earnings outlook for fiscal 2019, hurt by the weakness in Europe.

The current earnings target of $15.50 to $16.60 per share before year-end MTM retirement plan accounting adjustments and certain other charges is down from the prior forecast of $17.20 to $17.80 per share.

In addition to lowering variable compensation, FedEx announced other cost-cutting measures to mitigate the below plan performance, which include a voluntary buyout program for eligible employees, international network capacity reductions at FedEx Express, limited hiring in staff functions and reductions in discretionary spending.

The transporting bellwether expects a pre-tax cash charge $450 million to $575 million related to the voluntary buyout program for U.S.-based employees to occur in the fourth quarter of fiscal 2019. Savings from this program are expected to be $225 million to $275 million in fiscal 2020.

The negative sentiment of FedEx also dragged down its peer United Parcel Service (UPS) during the extending trading hours. UPS stock, which hit a fresh yearly low ($96.36) on Tuesday, was down about 4% after the bell.

FedEx got increased attention in the Wall Street recently as the stock continued to plunge to its new 52-week lows daily during last week. The pressure continued on Monday and the shares registered a fresh yearly low ($181.28). FedEx stock, which increased by 1.55% to $185.01 at the end of Tuesday’s trading session, had tumbled 24% both in the last three months and the past one year periods.