Oilfield service provider Halliburton Co (HAL) is expected to announce its fourth-quarter 2018 results before the opening bell on Jan. 22.

For the three-month period that ended on December 2018, the Street expects earnings of $0.37 per share on revenue of about $5.9 billion.

With sector leader Schlumberger (SLB) not exuding confidence, Halliburton is also not expected to beat earnings consensus for the quarter.

Oil service providers usually see a surge in their sales and profitability after strong commodity prices, as they typically point to robust upstream activities.

But West Texas Intermediate (WTI) crude oil prices crashed in the past quarter. This could lead to stakeholders treading a more careful line regarding further investment.

A general industry slowdown would hurt the overall demand for services and equipment — something that is not looking good for Halliburton.

In the previously reported quarter, robust international activity beat the slowdown in North American drilling fluids demand and pricing pressures leading to an earnings beat of 2%. 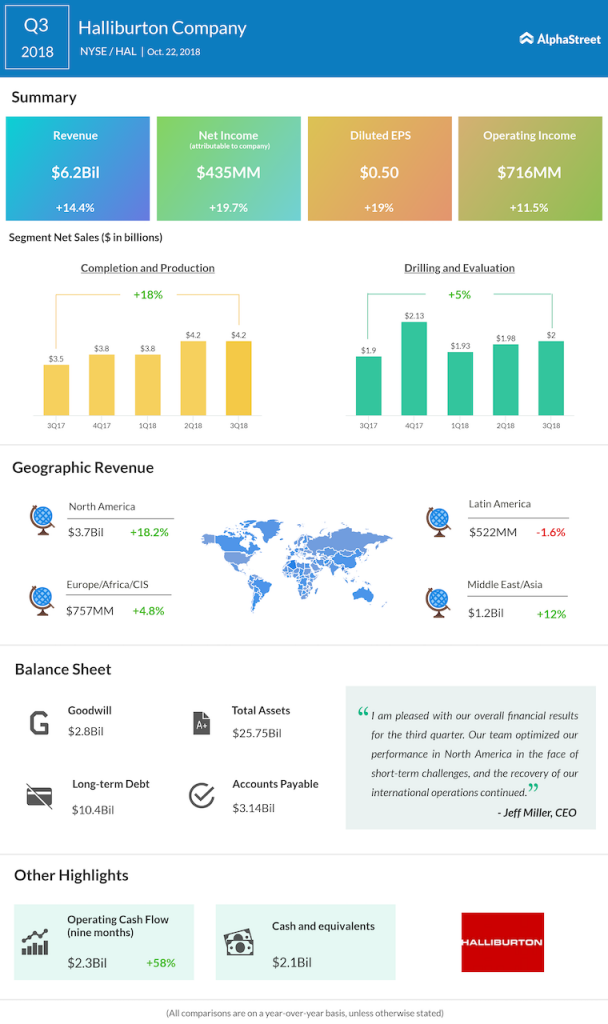 ALL IS NOT WELL

Despite reservations on slowing demand for Halliburton services, the fourth quarter saw US rig count rise by 29 to 1,083 from 1,054 — despite the oil price crash.

Halliburton is expected to gain favorably on this.

However, pipeline takeaway capacity constraints in the Permian Basin might still come to bite Halliburton’s prospects.

The company has already warned about a slowdown in the Permian Basin affecting fourth-quarter earnings. This could also push Halliburton’s adjusted operating income estimate for completion and production close to $460 million, much lower than third quarter’s $613 million. This is troublesome, since it is the lion’s share of the company’s total operating income.