Shares of HP Inc. (NYSE: HPQ) are down more than 6% in the extended hours of trading after the PC maker reported its first-quarter 2019 results. The company failed to meet the top line forecast provided by analysts, while the adjusted EPS came met street estimates. Free cash flow plunged 31% to $0.7 billion over last year, which would be a concern for investors.

HP reported a modest gain of 1% in revenues to $14.7 billion while adjusted EPS improved 8% to $0.52 over last year. Q1 results were hurt by the decline in PC shipments and printer supplies line. Analysts were expecting HP to report sales of $14.8 billion and adjusted EPS of $0.52.

Last quarter, HP had guided GAAP EPS in the range of $0.46 to $0.49 and adjusted earnings in the range of $0.50 to $0.53 per share. It’s worth noting that in the fourth quarter, the company reported a 120% jump in profits aided by across the board growth from PC and printer businesses. 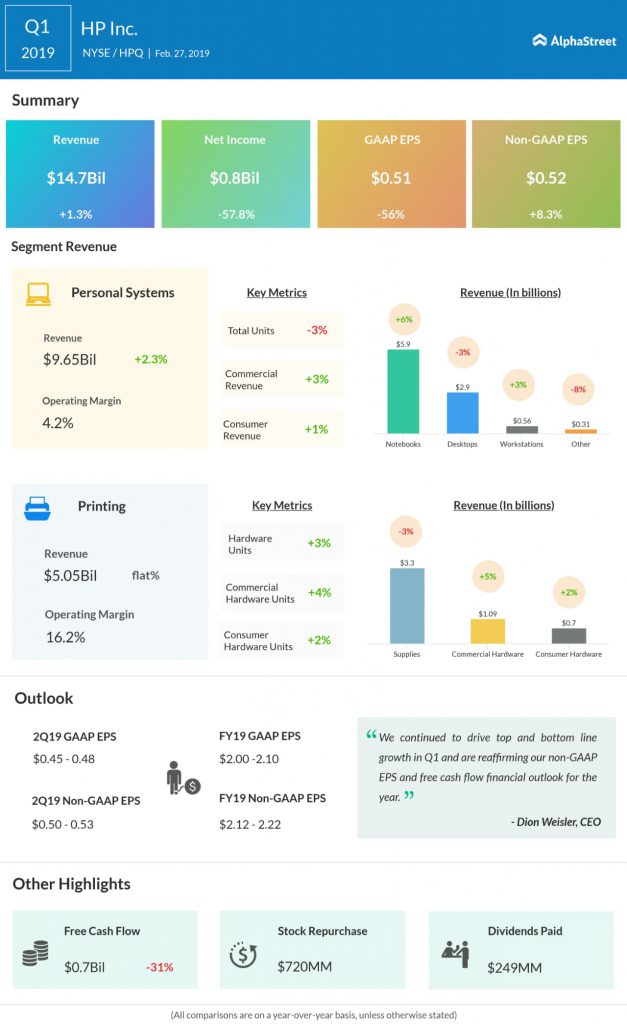 On the segment front, a 3% drop in PC shipments dragged the Personal Systems division revenues, offset by 6% growth in the notebook shipments. Supplies recorded a 3% drop in sales impacting the Printing segment but helped by 5% growth in the commercial hardware product line.

The company spent $1 billion in the first quarter for paying dividends and share repurchases. The company’s board declared a dividend of $0.1602 per share for the Q1 period. HP returned 144% of its free cash flow to shareholders.

PC shipments are impacted primarily due to CPU shortages from Intel and the ongoing trade war between the US and China. In addition, there is intense competition from the likes of Lenovo, Dell, and Apple (AAPL) on the PC space to gain market share.

In order to address this issue, the company has been focusing on high-end form factors. In addition, it has been shifting its focus on the Device as a Service part as the industry is heading towards contractual solutions. On the printing domain, HP has been focusing on business printing, Graphic solutions, and 3D printing. These initiatives are expected to give a fillip to the top and bottom line in the near future.

The company’s stock price has increased by 16% this year and saw an improvement of 1% in the last 12 months.