IBM is in the process of spinning off the Managed Infrastructure Services business into a separate public entity called Kyndryl, in an effort to streamline the struggling Global Technology Services segment

International Business Machines Corp. (NYSE: IBM), which is often called a laggard in the rapidly growing tech sector, has made significant progress in its transition to a cloud-centric business. Continued innovation, with focus on advanced technologies like artificial intelligence, has made the Big Blue a market leader in hybrid cloud technology.

Over the past several years, the New York-based computing giant generated profit that either matched or topped the market’s projection. The top-line started gaining strength lately, after years of stagnation. But the stock failed to match the financial performance and often underperformed the broad market, though it entered the growth path this year. While its near-term prospects look modest, the stock has what it takes to create meaningful shareholder value in the coming years.

IBM looks cheap even after the recent gains and it should not disappoint investors looking for long positions. The company’s impressive dividend history, marked by consistent hikes, also makes the stock attractive.

IBM has been around for more than a century and is currently riding the success of its unique hybrid-cloud strategy, which allows users to store data on public clouds like AWS and Azure as well as on-premise private servers. The cloud initiatives got a major boost after the company’s $34-billion acquisition of Red Hat two years ago. The hybrid model is expected to gain further traction as the pandemic-driven digitization enters the next phase, due to factors like cost-reduction and data security. 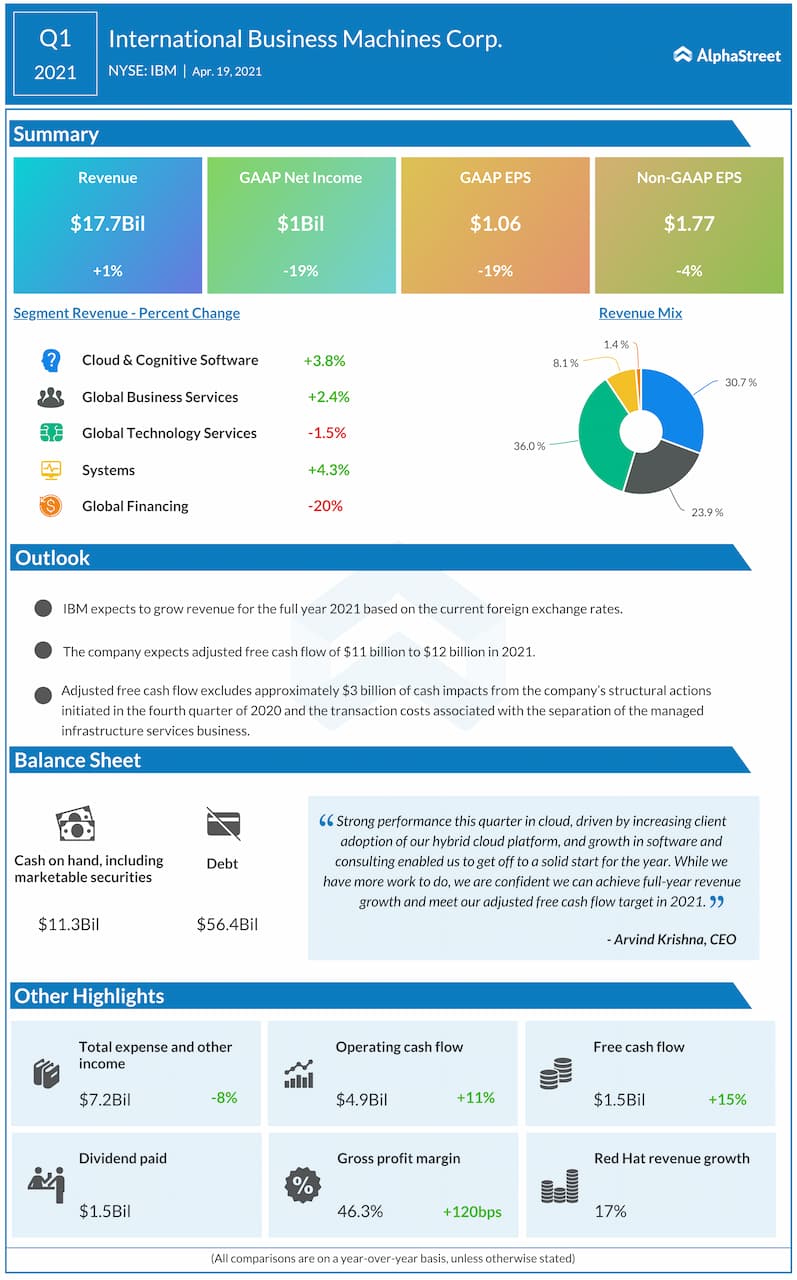 IBM’s recent performance indicates that CEO Aravind Krishna’s growth strategy has started paying off. The cloud segment grew about 4% in the early months of 2021and accounted for about 30% of the total business. First-quarter revenues moved up 1% to $18 billion, translating into adjusted earnings of $1.77 per share, which is down 4% year-over-year though.

As we move through the year, we will continue to execute on the important changes we are making to the company. From the acquisitions, we are making to the investments to expand our partner ecosystem, to the significant overhaul of our go-to-market model that we announced back in January, to the changes we are bringing to our culture to instill more of a growth mindset.

Meanwhile, the continued slowdown in the largest business unit – Global Technology Services – is a cause for concern for the company’s stakeholders. In an effort to streamline the segment, it is spinning off the legacy Managed Infrastructure Services business into a separate public entity called Kyndryl. Yet, the performance of the new company will influence IBM’s shares going forward. Long-term success would depend on expanding market share in the cloud space that is currently ruled by Amazon.com (NASDAQ: AMZN) and Microsoft Corporation (NASDAQ: MSFT).

The stock, which had languished below the historical average, got a fresh boost early this year and gained about 22% since Mid-January. It traded higher on Friday afternoon, after opening the session at $145.55.