Can Activision Blizzard extend the growth on strength of top franchises?

User base expanded to a record high of about $435 million, helped mainly by the free-to-play and mobile versions of Call of Duty

Video game publisher Activision Blizzard, Inc. (NASDAQ: ATVI) witnessed a sharp increase in demand during the pandemic, reflecting the spike in the consumption of online content after the country went into lock-down. While expanding the library of popular franchises, the company keeps innovating the portfolio to achieve its ambitious goal of growing the user base to 1 billion.

Activision’s stock hit an all-time high in early February when the market responded positively to its earnings report. The company recently announced a 15% hike in quarterly dividend – to be paid this week – making the stock more attractive. With the factors behind the current uptrend still intact, the stock should generate better shareholder value going forward. Investors wouldn’t want to miss this opportunity, given the strong buy rating and impressive target price.

The gaming giant’s user base has grown to a record high of about $435 million, helped mainly by the launch of the free-to-play and mobile versions of Call of Duty that saw a 40% growth in user count. The company has strengthened its balance sheet by generating record high cash flows in the early months of the year, which would help it continue investing in the business. In the most recent quarter, popular gaming franchises Call of Duty, World of Warcraft, and Candy Crush delivered strong double-digit bookings growth. 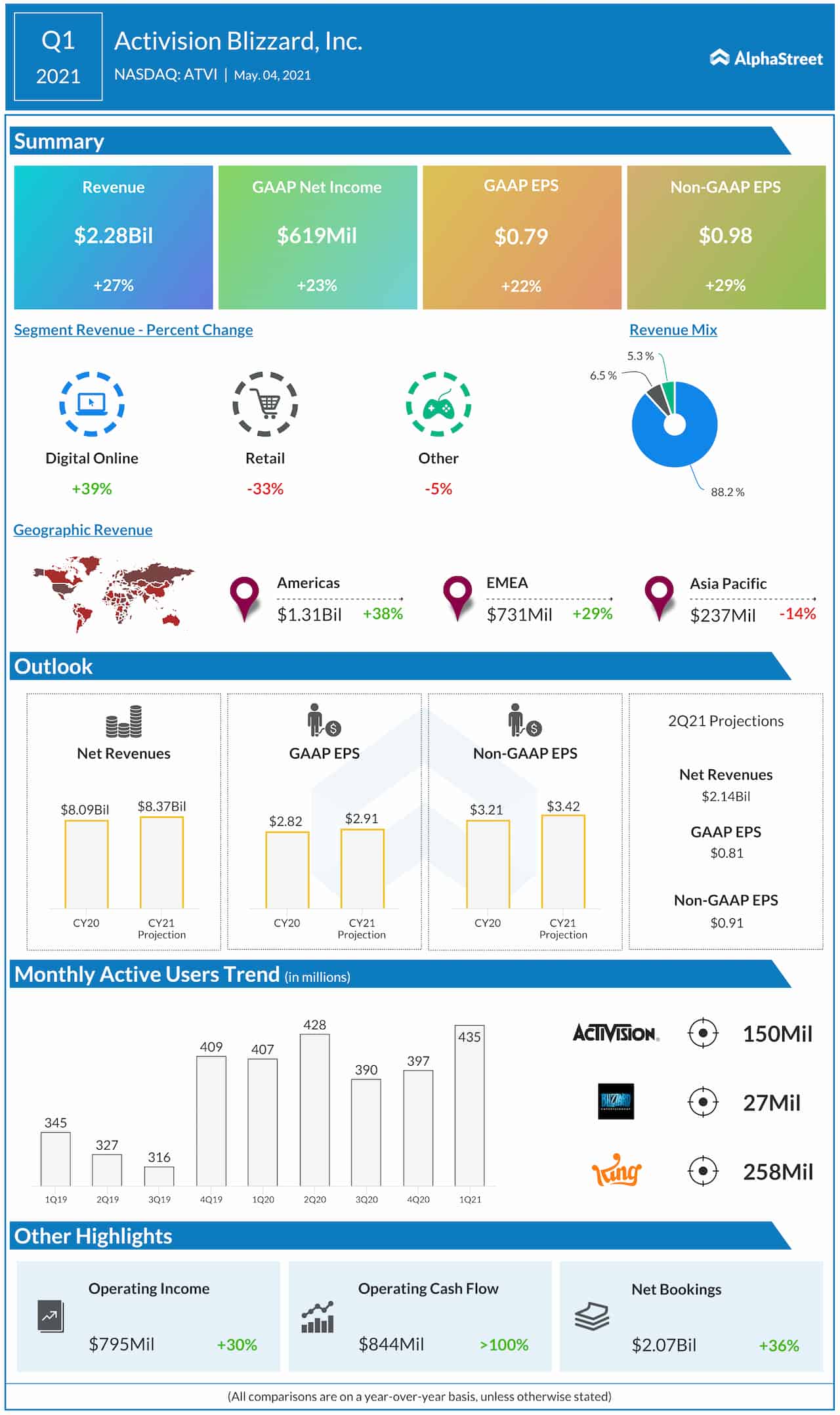 After the recent expansion, Activision’s premium segment has experienced an increase in conversions while in-game player investments picked up. Meanwhile, it needs to be seen if the company would be able to continue luring players as the vaccination drive expedites market reopening. It is already seeing a variation in user engagement between the regions where reopening is progressing and areas that are in shutdown mode.

Electronic Arts-Glu Mobile deal: A move in the right direction

Our increased investments in our largest franchises are enabling us to connect and engage people in more ways than ever before. Shelter-from-home has accelerated a trend, we’ve been seeing where consumers around the world are turning to gaming for entertainment, connection, and community. Our successful growth initiatives in our largest franchises, vibrant and active communities and our strong pipeline position us to continue driving strong results this year as regions start to reopen.

Reflecting the strong user growth and increased player engagement, first-quarter revenues rose at a stronger-than-expected rate of 27% year-over-year to $2.28 billion. As a result, adjusted earnings climbed to $0.98 per share from $0.76 per share. The digital channel accounted for about 88% of total revenues. Buoyed by the solid momentum across the business, the management raised its full-year outlook and plans to ramp investments, with a focus on expanding the market and deepening user engagement.

After jumping to a record high earlier this year and breaching the $100-mark for the first time, Activision’s stock withdrew in the following weeks and stabilized at the pre-peak levels. It has gained 26% in the past twelve months and traded sharply higher in the early hours of Wednesday’s session.