Recently, Qualcomm signed a multi-year agreement with Samsung to expand the use of its popular Snapdragon platforms for the latter’s Galaxy products globally

Chipmaker Qualcomm, Inc. (NASDAQ: QCOM) has performed well so far this fiscal year, successfully overcoming the general market slump and inflation-induced drag on customer sentiment. The company that is specialized in smartphone processors is well-positioned to tap into emerging opportunities in other areas like the Internet of Things and automotive manufacturing.

While pursuing growth goals constantly, Qualcomm also maintained its focus on returning capital to shareholders. After being hiked at regular intervals, the company’s current dividend yield is an impressive 2.1%. In the most recent quarter, around $500 million was returned to shareholders in the form of stock buybacks. According to experts, QCOM’s value is poised to grow by a third in the near term and surpass the record highs seen in the final months of 2021.

It looks like the company’s large exposure in the smartphone industry, after constantly expanding market share in that area, is a boon and bane at the same time. There is every reason to believe that the mobile market will continue growing in the foreseeable future, though sales have been affected by a dip in demand due to temporary market headwinds. It is worth noting that Qualcomm’s popular Snapdragon series continues to be the preferred processor for many Android phone makers.

Recently, the company signed a new multi-year agreement with Samsung, primarily to expand the use of Snapdragon platforms in the latter’s Galaxy products globally. The pact also covers other areas like PCs, tablets, and extended reality. 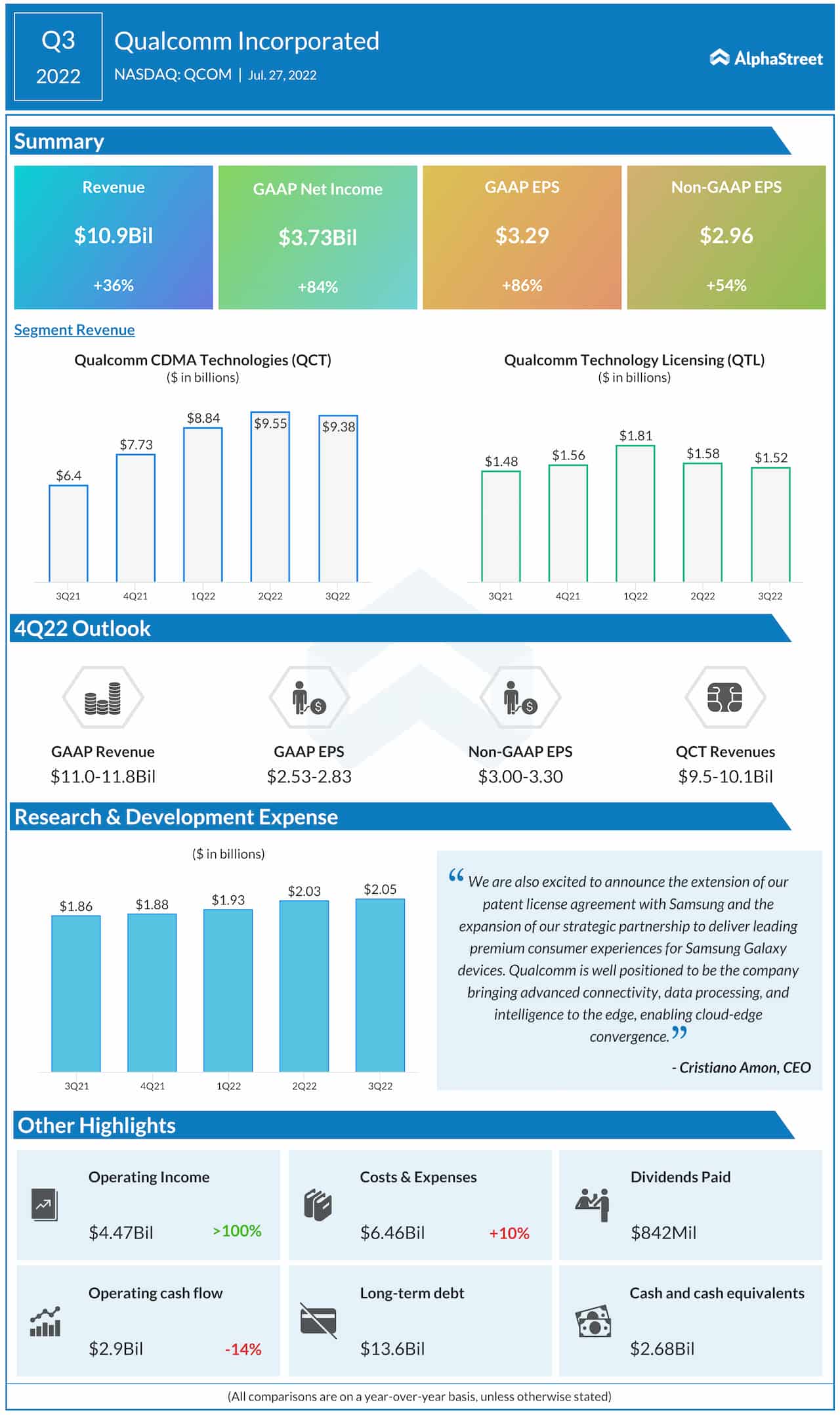 Qualcomm’s constant efforts to adopt the latest technology give it an advantage when it comes to offering 5G solutions. Elsewhere, the automotive industry’s response to Snapdragon Digital Chassis has been encouraging, for its ability to support manufacturers’ transition to next-generation vehicles. Currently, the company’s automotive design win pipeline is estimated at over $19 billion.

“For personal computing, we are continuing to drive the inevitable transition to ARM. We are on track to deliver Windows on Snapdragon compute platforms for next-generation PCs powered by our custom CPUs while redefining mobile productivity and on-device AI. To support the accelerating transition to ARM-based computing, Microsoft recently announced Project Volterra, a new developer kit powered by the Snapdragon compute platform featuring the Qualcomm AI engine.”

Over the past several years, the San Diego-based tech firm has never disappointed its stakeholders when it comes to earnings performance — generating profits that always beat estimates. In the third quarter of 2022, both operating segments registered double-digit growth, driving up total revenues to about $11 billion. Consequently, adjusted earnings climbed 54% annually to $2.96 per share. The management expects fourth-quarter revenues to be broadly at the third-quarter levels. R&D accounts for a major share of Qualcomm’s operating expenses, a trend that continued over the past several quarters, and that drives innovations in product offerings.

Qualcomm’s shares ended lower last week, extending the volatility experienced after the earnings announcement. They’ve lost about 23% since the beginning of the year.