Chinese solar giant JinkoSolar (JKS) saw fourth-quarter revenue grow 21.5% to $1.12 billion, pushing net profit to $16.3 million or $0.40 per share, as it posted its results before opening bell on Friday.  However, this came in below the market expectations — analysts were looking for earnings of $0.72 a share on revenue of $1.29 billion for the three-month period. 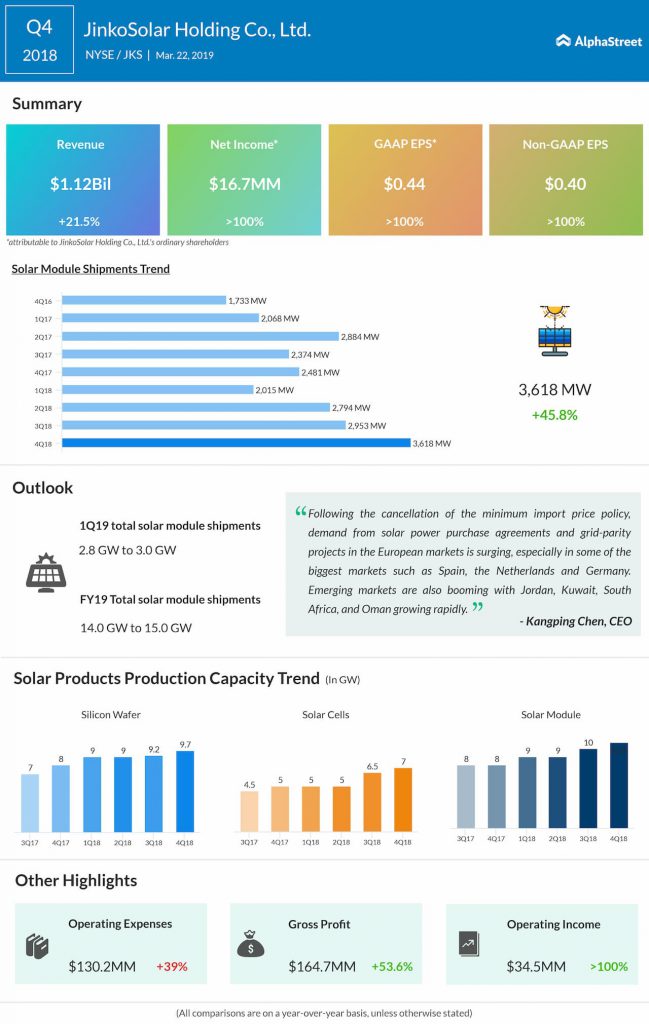 JKS shares fell 3.1% during pre-market trading on Friday. The stock has gained 96% so far this year, though it ended its last trading session down 9% on Thursday.

CEO Kangping Chen said, “US demand continues to strengthen thanks to the introduction of the solar Investment Tax Credit (ITC) which is expected to generate robust growth during the second half of 2019.”

Earlier this month, Korea-based Hanwha Q Cells had filed a patent infringement lawsuit claiming that JinkoSolar had used its patented solar cell passivation technology on its solar cells. However, JinkoSolar has refuted these allegations stating that there is no legal merit.

It also added the lawsuit would not affect its operations in any way. During the earnings conference call, the management may provide more updates on the same.

Globally, there is improved demand for solar panels as module prices have come down. Solar projects are expected to increase in 2019 and beyond, which is a long-term growth driver for JinkoSolar.

The company would also benefit from increased shipments from China, US, Europe, and Middle East regions in the near future.