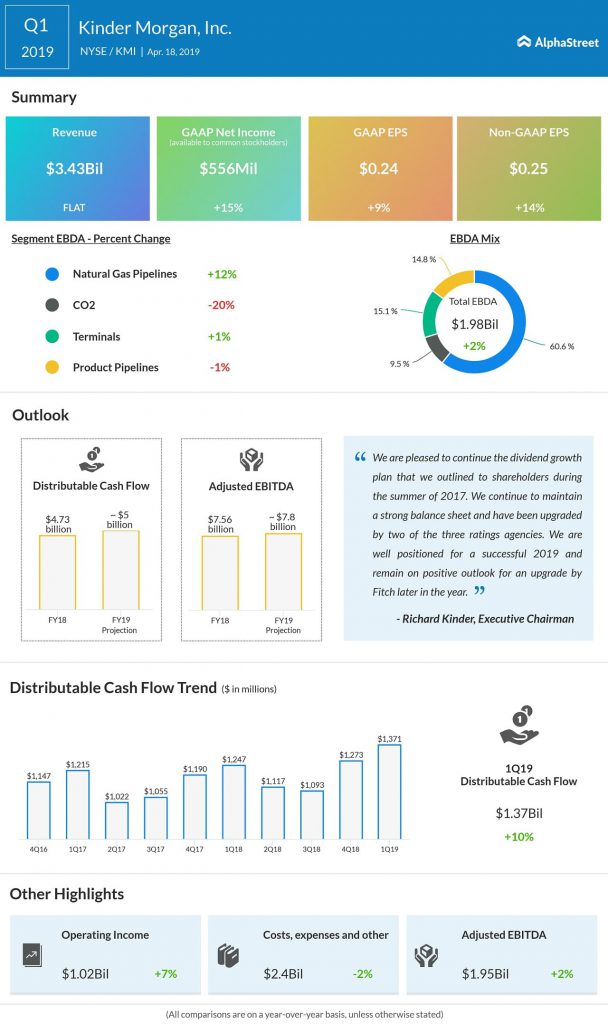 At $3.43 billion, revenues were up 0.3% compared to the year-ago quarter. The top line benefitted from a strong performance by the natural gas segment but missed analysts’ forecast.

KMI shares fell 0.2% during aftermarket trading on Wednesday. The stock has gained 24% in the trailing 52 weeks and 25% in the year-to-date period.

CEO Steve Kean said, “Contributions from our Natural Gas Pipelines segment were up substantially compared to the first quarter of 2018. We continued to make progress on two projects critical to the development of resources in the Permian Basin: the Gulf Coast Express and Permian Highway Pipeline projects, as well as our Elba Liquefaction facility.”

Looking ahead, the management reiterated its expectation of distributable cash flow at $5 billion in fiscal 2019 when adjusted EBITDA is anticipated to come in at $7.8 billion. During the fiscal year, a total of $3.1 billion will be invested in growth projects and joint ventures.

The Kinder Morgan board also announced a cash dividend of $0.25 per share for the first quarter payable on May 15, 2019, to common stockholders of record as on April 30, 2019.