Mattel Inc. (MAT) swung to profit in the fourth quarter of 2018 beating the analysts’ expectations. The company also beat sales predictions. Mattel reported a profit of 4 cents per share compared to a loss of 72 cents per share in the prior-year quarter. Net sales dropped 5% year-over-year on a reported basis to $1.52 billion.

Analysts had expected the toymaker to report a loss of 16 cents per share on revenue of $1.44 billion for the recently ended quarter. Mattel stock, which ended down 1.04% at $12.36 today, surged about 15% in the extended hours of trading.

Sales for the quarter ended December 31, 2018, was hurt by the Toys “R” Us liquidation and slowdown in the China business. 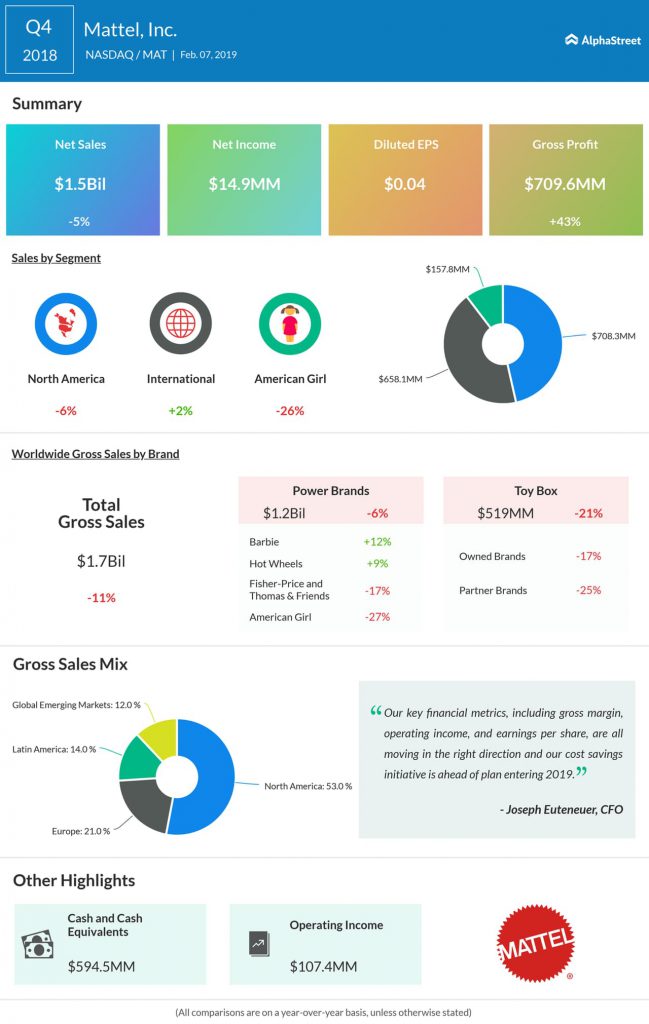 “Our key financial metrics, including gross margin, operating income, and earnings per share, are all moving in the right direction and our cost savings initiative is ahead of plan entering 2019″, said CFO Joseph Euteneuer.

Last month, Mattel announced a partnership with Warner Bros. Pictures Group to bring the world-renowned Barbie franchise to theaters in its first ever live-action feature film. This deal is the first movie deal announced by Mattel Films, the new theatrical film division of Mattel. The same partnership will also bring in Hot Wheels feature film to the big screen.

Mattel’s peer Hasbro (HAS) will be reporting its fourth quarter earnings on Friday before the market opens. Wall Street expects costs to impact the traditional toymaker’s quarterly profit. Hasbro stock ended Thursday’s regular trading session down 0.82% at $90.25 and was up about 1% in the after-hours.

Shares of Mattel had surged 24% in the year-to-date period and dropped 11% in the past three months.