Microsoft’s acquisition of Activision looks like a win-win deal. Here’s why

Microsoft will get access to popular Activision games like Call of Duty, Candy Crush, and World of Warcraft

Activision Blizzard Inc. (NASDAQ: ATVI) is all set to begin a new journey by joining the fold of tech giant Microsoft Corp. (NASDAQ: MSFT) through an acquisition that is expected to benefit both the gaming giant and Microsoft’s Xbox division. Activision this week announced its first-quarter results, three months after Microsoft revealed plans to acquire it in one of the biggest deals the gaming industry has ever witnessed.

Meanwhile, the mixed results have raised concerns that the pandemic-driven gaming boom is waning as players are spending lesser time on consoles, especially after the market reopening gathered momentum, than they did when movement restrictions were in place.

After suffering a big fall in the final weeks of last year, Activision’s stock entered 2022 on an upbeat note and remained stable since then. However, it slid this week following the earnings announcement as the unimpressive top-line performance didn’t go well with investors. Going forward, the positive sentiment from the Microsoft deal would be the main growth driver for the stock, which is expected to reach near the $100-mark in the coming months. For that reason, ATVI is a must-own stock for long-term investors.

Activision is expected to become better organized under Microsoft, which would help it sort out the issues related to workplace misconduct and multiple litigations, though it would be a challenging task for the latter to put things in order at Activision.

Post-acquisition, Microsoft would get access to titles like Call of Duty, Candy Crush, and World of Warcraft, which are the most popular Activision games. And, the tech titan would become a much bigger player in gaming, which is significant considering the highly competitive nature of the industry. 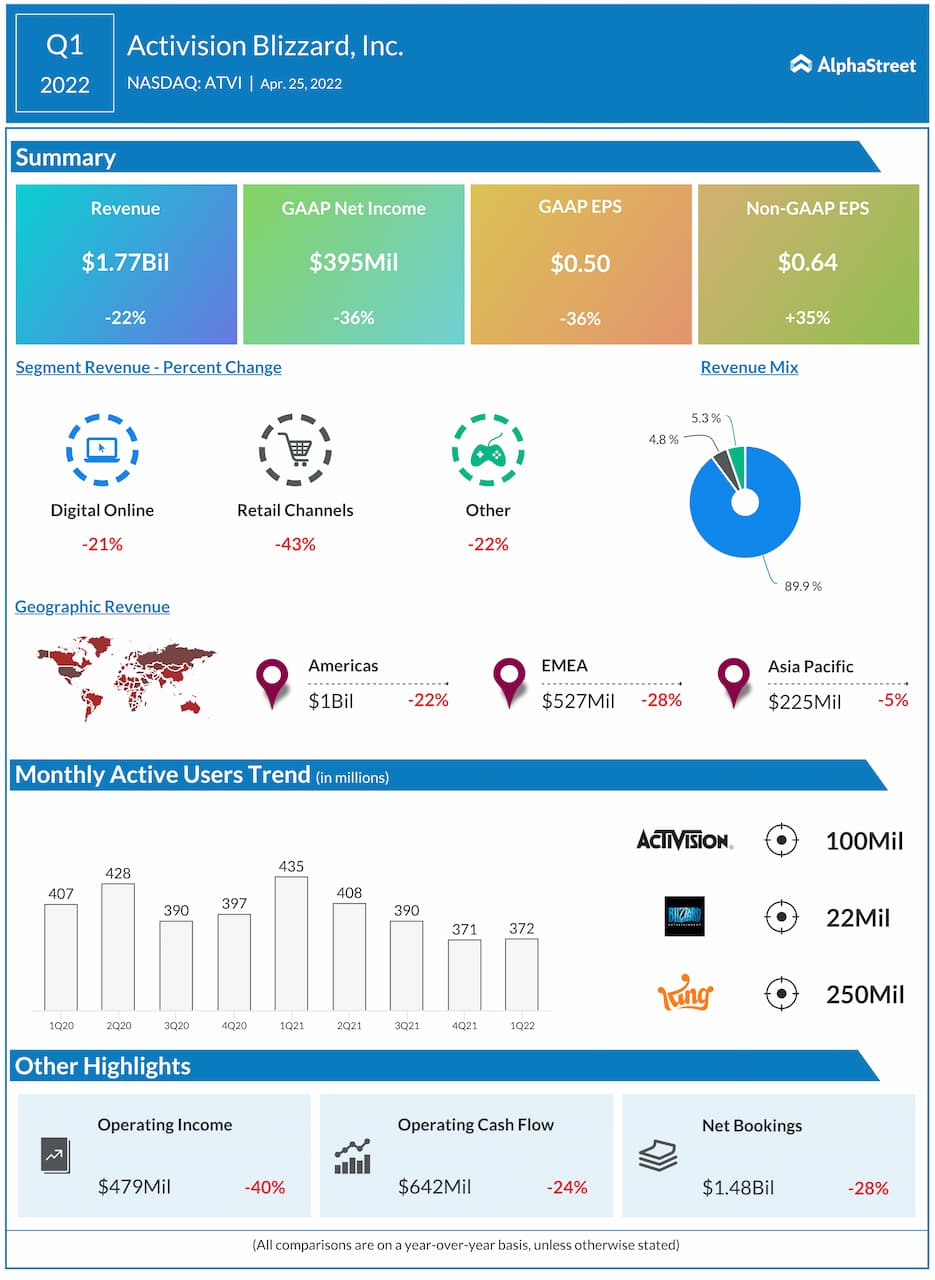 In the first quarter of 2022, Activision’s adjusted earnings increased by more than a third to $0.64 per share and topped analysts’ forecast. Meanwhile, revenues declined sharply to $1.8 billion, hurt mainly by weak demand for the latest release of Call of Duty and lesser user engagement for the earlier versions of the game. All the three operating segment’s witnessed weakness even as subscriber numbers continued to decline year-over-year, though there was a modest sequential increase.

Earlier this year, Microsoft revealed plans to acquire Activision for $0.95 per share in an all-cash transaction. Currently, the deal is under regulatory review and is subject to customary closing conditions. It is expected to close in the first half of 2023 after securing shareholders’ approval, which is unlikely to face any hassle in the absence of activist investors opposing the deal. Also, there are no sufficient grounds for regulators to deny antitrust clearance.

The buyout is the latest among Microsoft’s high-value purchases including LinkedIn, GitHub, and Skype. In its most recent quarter, Microsoft reported strong growth across all business segments, resulting in a 20% rise in earnings. Xbox content revenue grew in double digits, recovering from the recent slump.

Shares of Activision gained about 21% since Mid-January when Microsoft announced the buyout plan. They traded lower throughout Tuesday’s session, extending the post-earnings weakness.