The management hiked capital expenditure to about $1 billion in the first quarter, which is more than double that of last year’s amount

Oracle Corporation (NYSE: ORCL) has successfully transformed from a software company into a cloud service provider, but there are concerns that the company has not been able to tap into emerging opportunities in the digital space, especially after the coronavirus outbreak. Currently, the tech firm is busy ramping up its cloud infrastructure business, hoping to catch up with rivals.

Oracle’s core business registered growth in the early months of fiscal 2022 and pushed up total revenues to $9.7 billion, which however fell short of experts’ projection. In the past five years, the company’s earnings either matched or beat estimates in every quarter. Though first-quarter earnings grew more than expected to $1.03 per share, the market was not impressed by the overall performance. The stock slipped following the announcement and continued to lose.

Meanwhile, analysts’ cautious rating and target price point to continued weakness, which makes ORCL an unattractive investment, at least until the next earnings release. Also, the stock looks overvalued after growing about 35% this year alone.

But investors wouldn’t want to ignore Oracle, rather they would prefer to keep it on their watch-list for now. However, long-term investors can still consider buying the recent dip since the relevance of the company’s broad portfolio of offerings is likely to increase in the coming years. 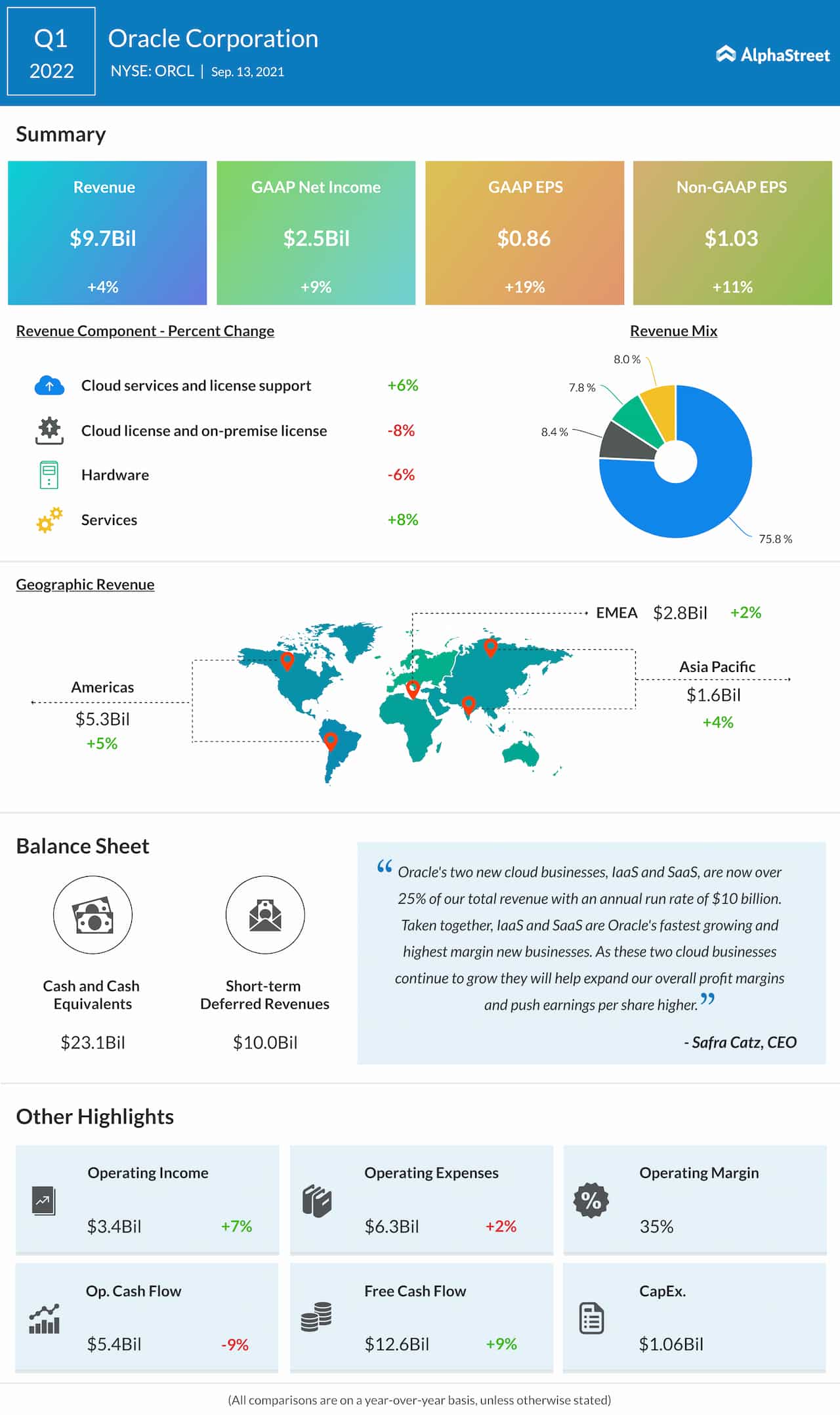 It is estimated that cloud spending would grow in double digits in the next few years, which bodes well for Oracle because the company’s market share in that segment is very low compared to rivals like Microsoft (NASDAQ: MSFT), Alphabet (NASDAQ: GOOG) and Amazon (NASDAQ: AMZN).

The management hiked capital expenditure to about $1 billion in the first quarter, which is more than double that of last year’s amount. Currently, the focus of capital investment is the expansion of cloud infrastructure to meet future demand. However, it might take a while before those efforts translate into profit.

…I remain highly confident that fiscal year ’22 revenue growth will accelerate because our fast-growing cloud businesses are becoming a larger portion of our total revenue. I see total revenue growth for fiscal year 2022, which is the one wherein, somewhere in the mid-single-digits in constant currency and accelerating. Cloud is fundamentally a more profitable business compared to on-premise. And as we look ahead to next year, we expect company operating margins will be the same or better than pre-pandemic levels.

After hitting an all-time high in August, Oracle’s stock almost stabilized but changed course and dropped following the mixed first-quarter report. In the past 30 days, the shares lost about 5%. They traded lower throughout Tuesday and closed the session down 3%.