Earnings preview: Settlement with Apple in focus ahead of Qualcomm’s Q2 report

When Qualcomm (Nasdaq: QCOM) reports second-quarter results Wednesday, the spotlight will be on the chipmaker’s settlement of patent lawsuits with Apple (AAPL), which came as a surprise to investors and triggered a stock rally earlier this month.

The consensus estimate is for an 11% decline in earnings to $0.71 per share on revenues of $4.8 billion, which represents an 8.2% drop from last year. At the post-earnings conference call, the management is expected to discuss the renewed contract with Apple and the future course of action. A positive earnings outcome could act as the catalyst for the stock which is already hovering near the peak.

Like its peers, the ongoing recovery of microprocessor prices bodes well for Qualcomm, though the slowdown in the smartphone market might weigh down on the shipment of MSM chips. According to the latest estimates, demand will increase during the remainder of the year, driving up the prices further. 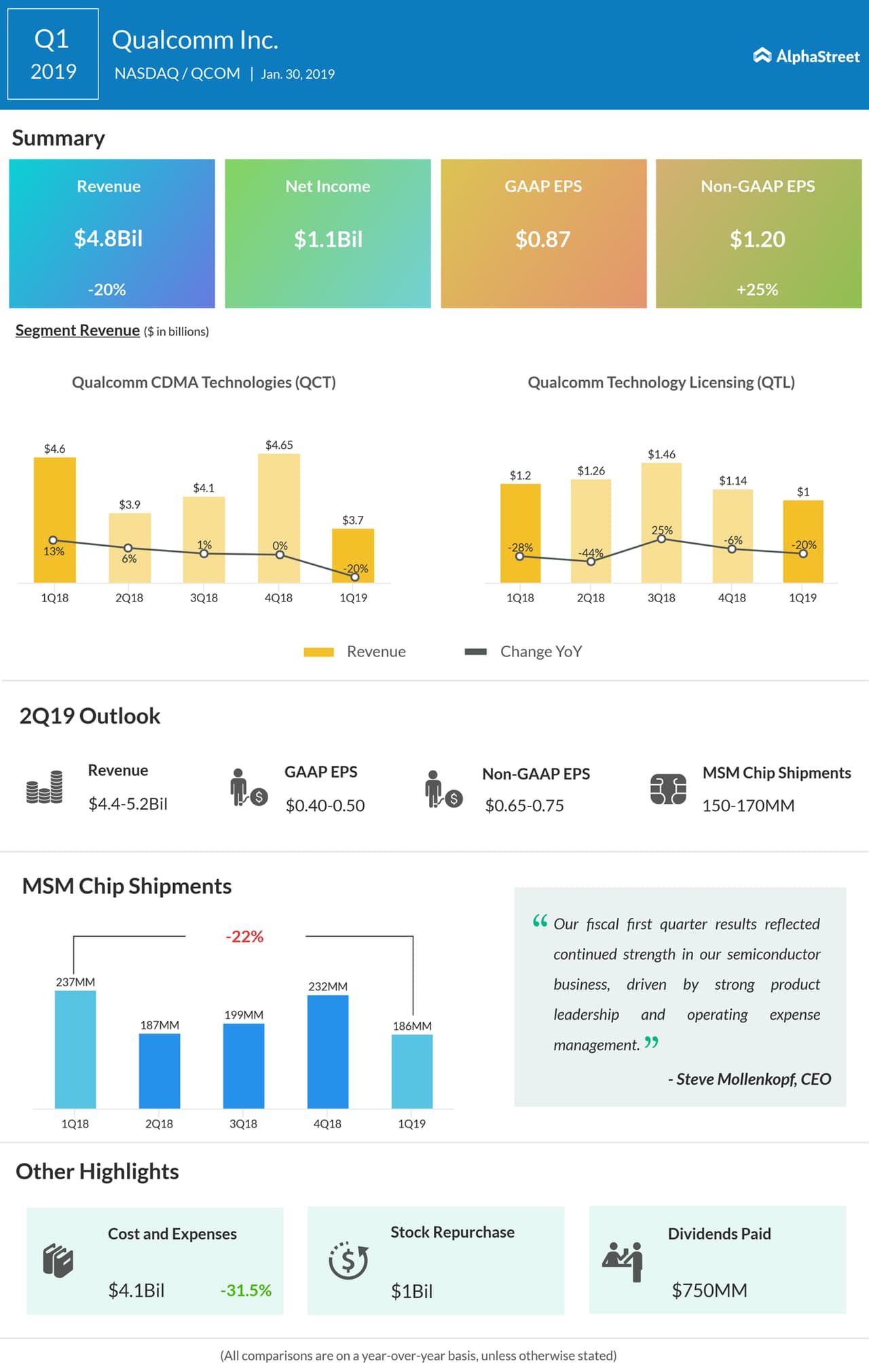 While patching up their differences, Apple awarded Qualcomm a multiyear contract, mainly covering the modem chips used in smartphones that constitute about three-fourths of Qualcomm’s revenues. Under a separate long-term licensing agreement, the company will get royalty payments until 2025 for the products supplied to Apple. An improvement in its cash position, by virtue of the new contracts and a major one-time payment agreed by Apple, will help Qualcomm return significant capital to shareholders in the form of dividends and share buyback.

While patching up their differences, Apple awarded Qualcomm a multiyear contract, mainly covering the modem chips used in smartphones

Qualcomm and Apple had been in a protracted legal battle for about two years, accusing each other of breaching patent rights and engaging in unethical business practices, across multiple markets.

In the first quarter, Qualcomm’s revenues suffered from a slump in demand and dropped 20% year-over-year to $4.8 billion. There was a 22% fall in MSM chip shipments during the quarter. Meanwhile, benefits from the improved pricing environment pushed up adjusted earnings by 25% to $1.20 per share.

Rival chipmaker Intel (INTC), whose prospects of winning a deal with Apple suffered a setback after the latter made peace with Qualcomm, last week reported flat revenues for the first quarter. Earnings, however, moved up 2% annually to $0.89 per share. Among others, Advanced Micro Devices (AMD) is slated to release first-quarter results Tuesday evening.

Qualcomm’s shares surged 23% mid-April and are trading near the peak they had reached about two decades ago. The stock got a further boost after Morgan Stanley raised its rating. The stock gained 65% in the last twelve months and is up 51% since the beginning of the year.