Earnings preview: What is in the cards when Roku reports Q1 results

TV streaming platform Roku (Nasdaq: ROKU) is scheduled to publish its first-quarter results Wednesday after the market closes. It is widely expected that the company will report a loss of $0.24 per share for the March quarter, wider than last year’s $0.07 per share loss. The forecast for revenues is $191.97 million, which represents a 41% year-over-year increase. The number of active accounts is expected to grow almost in the same degree and cross the 28-million mark.

The weak performance at the bottom line reflects the diversion of capital for investments in expansion activities. In the preceding four quarters, earnings went past the estimates of market watchers. That justifies the general view of investors that Roku is a lucrative investment option ahead of the upcoming report. 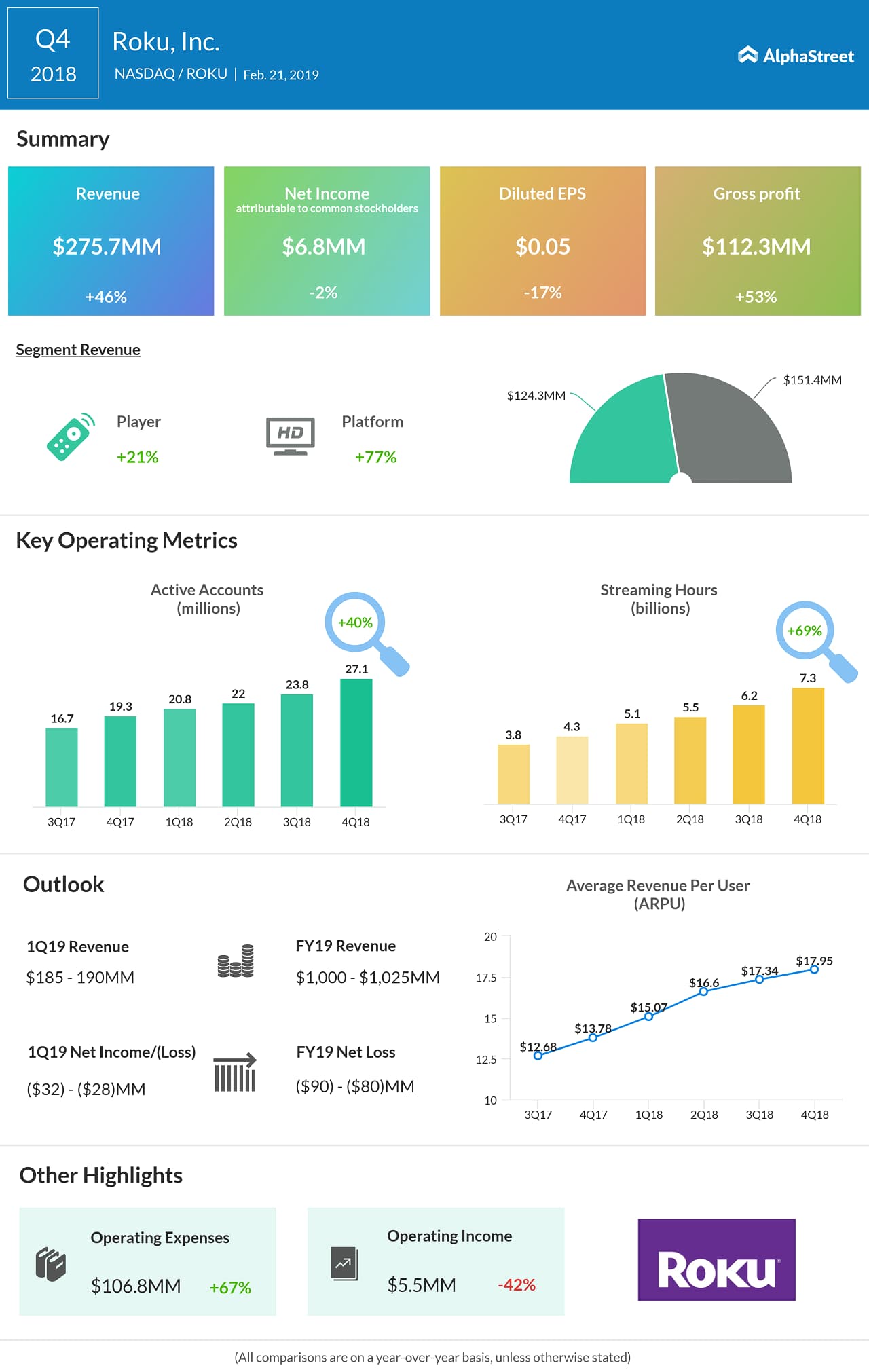 There has been a marked increase in the sales of Roku-supported TVs in the US in recent years, which is in line with the company’s claims that it surpassed rivals like Amazon Fire and Apple TV in terms of the customer base.

In recent years, there has been a marked increase in the sales of Roku-supported televisions in the US

The market is bullish about Roku’s long-term prospects as a full-fledged streaming service provider, especially in the wake of the launch of the Roku Channel, offering a wide range of TV shows and movies. There is speculation that given the current growth rate, Roku will soon start giving competition to Netflix.

It is estimated that is that the heavy investments in growth initiatives, especially in overseas expansion, will start yielding returns towards the end of the year.

Roku’s per-user revenue improved consistently in the past two years and reached $17.95 in the last quarter, reflecting the continuing uptick in the number of active accounts and user hours. In the December quarter, earnings dropped 17% and were broadly flat, despite a 46% rise in revenues to $276 million.

Last month, Netflix (NFLX) reported a further steep increase in membership-base to about 149 million, with international markets accounting for the majority of the expansion. Earnings and revenues registered double-digit growth aided by a 23% growth in streaming revenue.

Roku’s market value dropped steeply in the final weeks of last year, but the stock recovered at an equally fast pace and is up 95% since the beginning of the year. The stock witnessed a great deal of volatility since the company went public two years ago. Over the past twelve months, it gained about 85%, outperforming the industry and the S&P 500 index.