Seagate Technology (STX) Stock: Why it makes sense to buy the dip

The company expanded its portfolio by launching Lyve edge to cloud platforms; teamed up with Google Cloud to develop technology for checking drive failure

The recent financial performance of Seagate Technology plc (NASDAQ: STX), a market leader in data storage solutions, has allayed fears that conventional hard disks are losing their relevance. After a slowdown, the hard drive market is regaining ground aided by the arrival of new enterprise applications and demand growth triggered by the digital transformation. It is worth noting that hard drives continue to be the preferred storage option for cloud and and data-center, due to high capacity, cost-effectiveness, and speed.

Two months ago, shares of the Silicon Valley-based HDD maker hit a record high and traded above the $100-mark briefly, but they pulled back in the following weeks and settled at the pre-peak levels. Despite the weakness, STX looks all set to hit the fast lane soon. With market watchers predicting decent growth in the twelve-month period, it is a good idea to add the stock to investment portfolios, though the short-term prospects are not very attractive.

The company has often been criticized for its fixation on traditional HDD, unlike rival Western Digital Corp. (NASDAQ: WDC) which is shifting focus to solid state drives (SDD). Seagate is currently investing its resources in the development of higher capacity drives — which is less expensive than venturing into the SDD business — and looks to take advantage of favorable pricing. The cash savings give the company extra leeway to return capital to shareholders. In fiscal 2021, it retired more than 13% of outstanding shares. 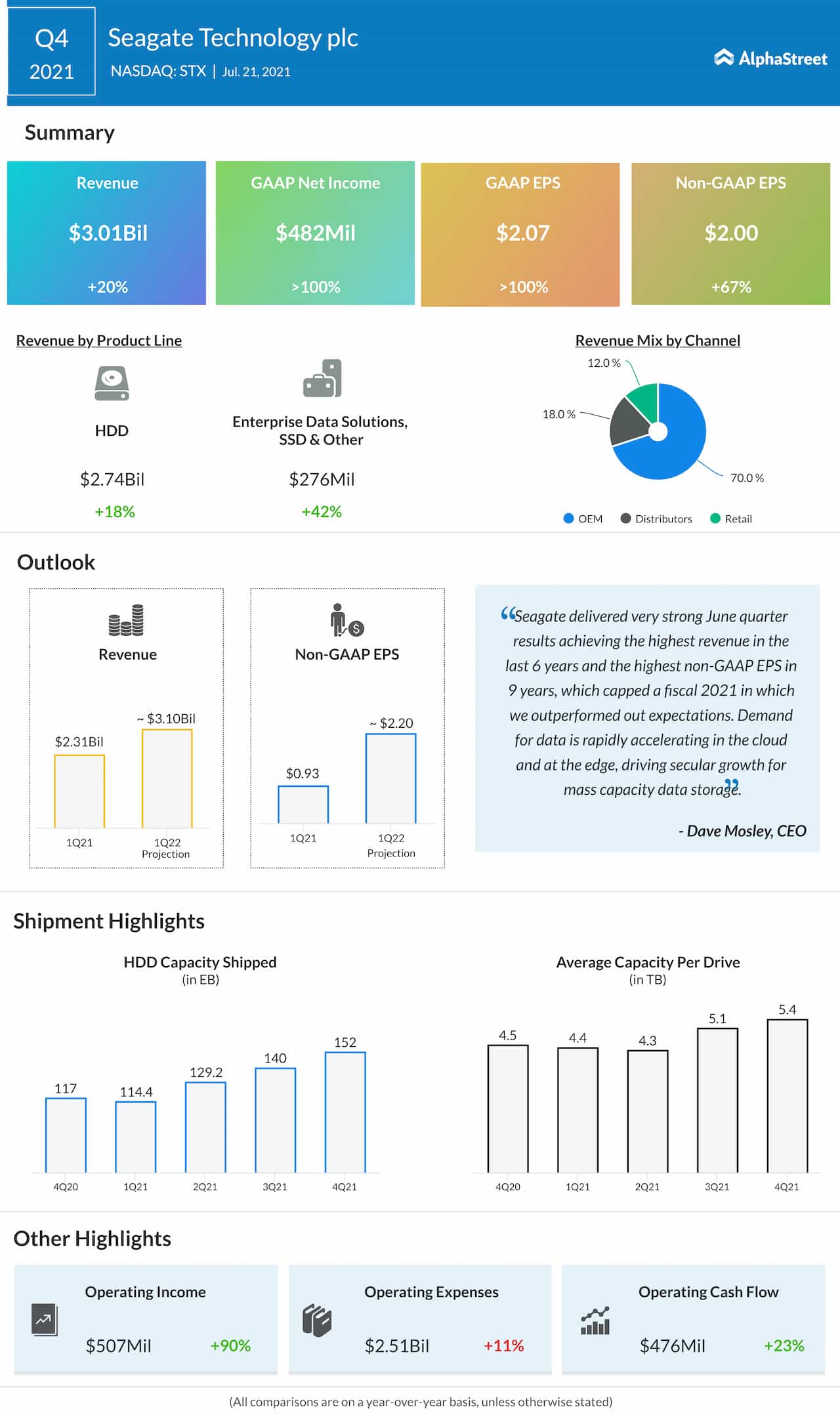 Seagate expanded its portfolio with the recent launch of Lyve edge to cloud platforms, and is planning to roll out four Lyve cloud metro edge locations by year-end. In a move aimed at finding an effective solution for disc damage, which is considered the main disadvantage of HDD, Seagate has teamed up with Google Cloud to develop technology that helps predict drive failures before they actually happen.

While the pandemic remains a difficult reality for many parts of the world and we remain vigilant and continue to manage the business through this period, it is clear the macro level that recovery is underway in the markets that we serve. Seagate is entering this recovery period in a very strong position helped by the fact that we executed incredibly well throughout the crisis. For fiscal year ’21, we generated nearly 2% year-over-year revenue growth exceeding our expectations.

Seagate reported stronger-than-expected earnings for every quarter in fiscal 2021, underscoring its ability to tap into opportunities created by the pandemic. In the final three months the year, revenues crossed the $3-billion mark for the first time in six years, which translated into a 67% increase in adjusted earnings to $2 per share. The numbers also exceeded the management’s guidance and the consensus forecast of analysts. The weakness in the PC segment was more than offset by stable demand for the company’s mission-critical drives and strong sales of consumer products.

Seagate vs. Western Digital: Which is the better investment?

The recovery in the enterprise market — thanks to the reopening and return of employees to offices — and the continuing digital transformation bode well for Seagate. However, threat from new technologies that could offfer better alternatives to traditional HDDs hangs over the company.

Seagate’s shares rose a whopping 78% since last year, mostly outperforming the broad market and staying above their long-term average. Continuing its recovery from the recent dip, the stock closed Friday’s session up 3%.