Seagate vs. Western Digital: Which is the better investment?

The data storage industry was going through a rough patch, amid faltering PC demand and muted enterprise spending, when the pandemic struck world markets. Interestingly, leading players like Western Digital Corp. (NASDAQ: WDC) and Seagate Technology (NASDAQ: STX) came out of the virus-induced slowdown quickly as the mass adoption of digital services lifted demand. The tech firms — both pioneers in internal storage solutions — are constantly innovating and exploring new avenues.

Western Digital ventured into the solid-state drive business a few years ago by acquiring SanDisk, thereby adding the latter’s SSD products to its portfolio. Currently, the share of SSD and flash memory drives in Western Digital’s revenue is much bigger compared to peers. But the volatility in memory chip prices amid oversupply weighed on the company’s top-line last year.

Meanwhile, realizing the need to stay relevant in the rapidly evolving storage industry, Seagate bolstered its portfolio of higher-capacity drives, targetting data-center customers, while also venturing into the SSD market by acquiring Toshiba’s memory chip assets. Since the companies continuously strive to outsmart each other, it has always been a neck-and-neck race.

Seagate has maintained a relatively better cash balance since its business model is less capital-intensive, which allowed the company to return capital to shareholders regularly without straining the balance sheet. On the other hand, Western Digital follows a subdued capital return program. While both companies pay dividends regularly, Seagate has hiked dividends more frequently than its rival.

A close look at analysts’ outlook indicates they are bullish about Western Digital’s prospects this year and the majority recommend buying the stock. On the other hand, market watchers and less optimistic about Seagate and are divided in their recommendations. The target price points to a modest decline in value, but the stock still offers an investment opportunity that is worth trying. 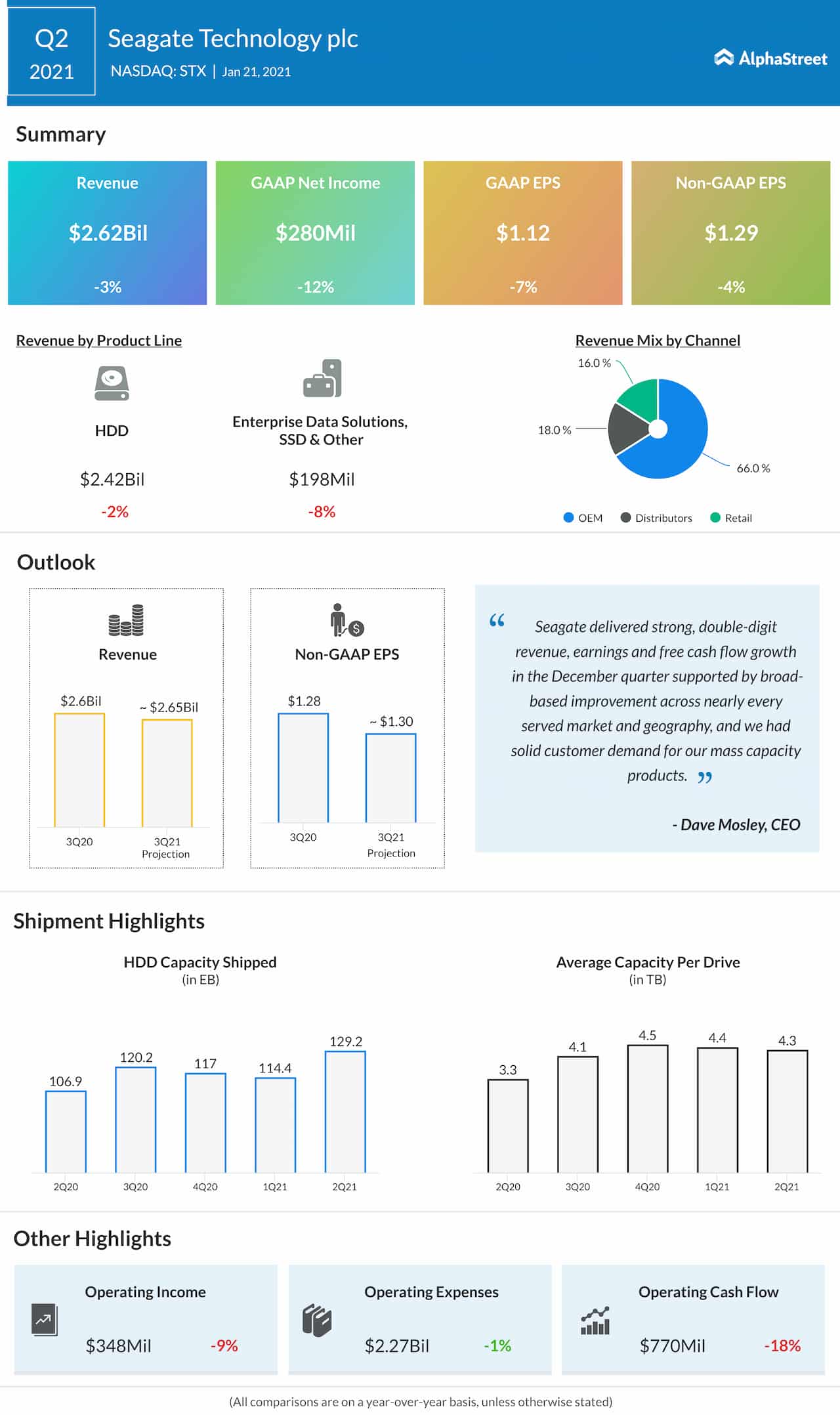 In the most recent quarter, both of Seagate’s operating segments witnessed contraction, which resulted in a 3% fall in total revenues to $2.6 billion. Consequently, adjusted earnings dropped to $1.29 per share. Revenues of Western Digital decreased 7% in the second quarter as growth in the core Client segment was more than offset by weakness in the Data Center business. However, the bottom-line increased 11% annually to $0.69 per share, aided by the management’s effective cost reduction measures.

“Against the backdrop of the pandemic, 2020 was headlined by diverging end market trends. Strong cloud investments to support our remote economy in digital transformation were countered by significant disruptions to enterprise IT spending. However, during the December quarter, the enterprise markets began to recover for the first time since the onset of the pandemic. The improvement was most pronounced among large enterprise OEM customers, which led to strong sequential revenue growth for both nearline and mission-critical drives.”

Western Digital and Seagate reported stronger-than-expected earnings in each of the past two quarters. Also, both companies expect their third-quarter earnings and revenues to be broadly in line with the previous quarter. The ongoing recovery in enterprise spending on IT infrastructure is expected to have a positive effect on performance in the second half.

Seagate’s stable cash position, limited exposure to the volatility in memory prices, combined with better dividend yield, give it an advantage over Western Digital, from an investment perspective. Another factor that goes in favor of Seagate is its dominance in the market for the large and high-speed internal storage drives.

Western Digital’s performance on the stock market has been mixed for quite some time. At $68.86, the stock closed the last trading session slightly higher, after gaining about 65% in the past twelve months. Seagate’s stock climbed to a record high this month, crossing the $75-mark for the first time. The stock has gained 26% since the beginning of the year.