Net loss per share attributable to common shareholders came down by 24% in the quarter to 23 cents per share. Non-GAAP net loss shrunk 44% to 10 cents per diluted share.

Analysts estimated the social media company to post a loss of 12 cents a share on estimated revenue of $306 million. Both metrics beat consensus estimates.

For the quarter, adjusted EBITDA was recorded as a loss of $123.5 million, smaller by 43% from a year ago.

Daily Active Users, a major metric for the company, remained almost flat year-over-year at $190 million for the quarter. However, it was a slight increase from $184 million that was recorded a quarter ago.

By March, Snapchat claimed it reached “90% of all 13-24 year-olds and 75% of all 13-34 year-olds in the U.S.” In a bid to add more users who are focused on speed, Snapchat’s latest Android app is 25% smaller, opens 20% faster on average, “and is modularized for more efficient ongoing innovation,” according to a statement by the company.

Despite a challenging past year for its major offering—Snapchat—2019 had so far gone well for SNAP with the stock more than doubling since the beginning of this year. Last week on Thursday, analyst firm Wedbush Securities downgraded SNAP to Neutral, while Vertical Group pulled the stock rating down to Negative. However, the majority of analysts covering SNAP recommend to HOLD the stock. 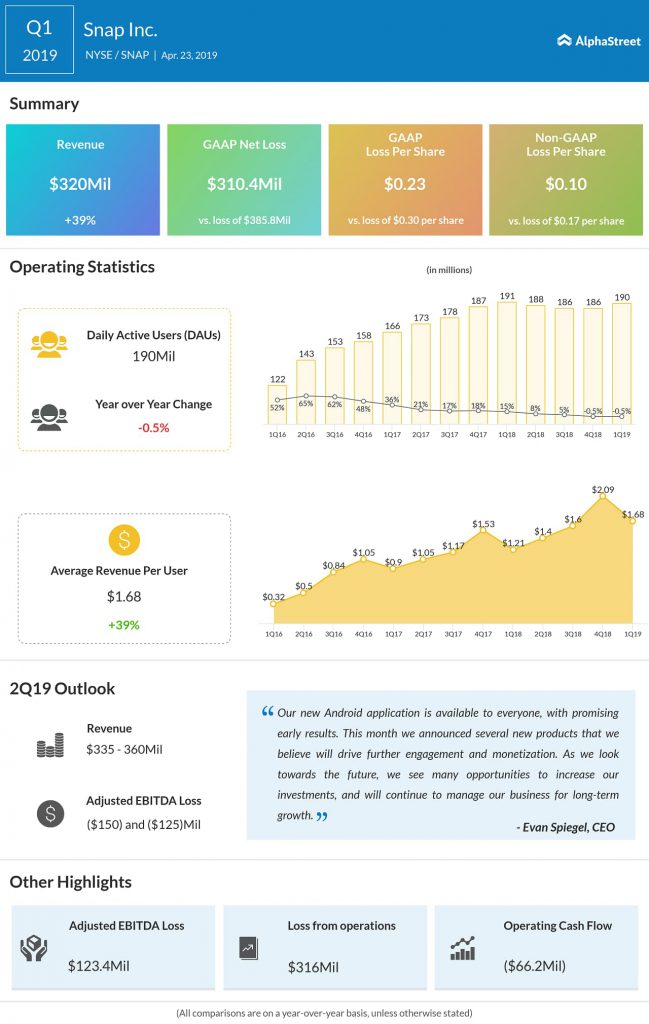 As Snap Inc posted its results, the company was also trying to prove a point by overcoming what 2018 was for the company. Last year, SNAP stock lost 63% of its value. A new redesign did not impress, and it shed daily active users. Finally, it culminated in the exit of then-CFO Tim Stone in January 2019.