Spotify Technologies S.A. (NYSE: SPOT) reported better-than-expected revenues for the first quarter of 2019 while earnings fell short of estimates. Shares were down 1.8% in morning hours on Monday. 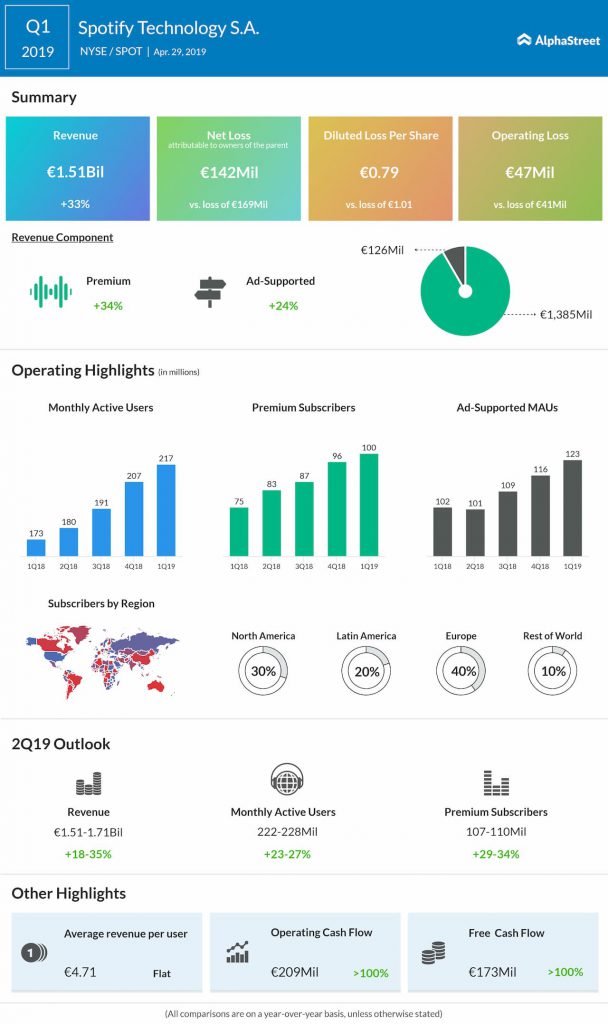 Average revenue per user (ARPU) was EUR4.71, roughly flat year-over-year. Spotify has experienced a declining trend in ARPU due to shifts in product and geographic mix. The company believes the downward pressure on ARPU has moderated and now expects ARPU declines through the remainder of the year to be in the low single digits.

Spotify’s key areas of growth during the quarter were measurement and programmatic revenues. Measurement-related revenues doubled from 20% to 40% of total ad revenues year-over-year. Programmatic and Self-Serve grew 53% from last year and now account for 26% of total ad-supported revenue.

In late February, Spotify launched its service in India and now has more than 2 million users in the country. The company’s global market footprint now spans 79 countries.

Premium subscribers grew 32% year-over-year to 100 million, reaching the high end of the company’s guidance range of 97-100 million. The outperformance was driven by a better than plan promotion in the US and Canada and continued strong growth in Family Plan.